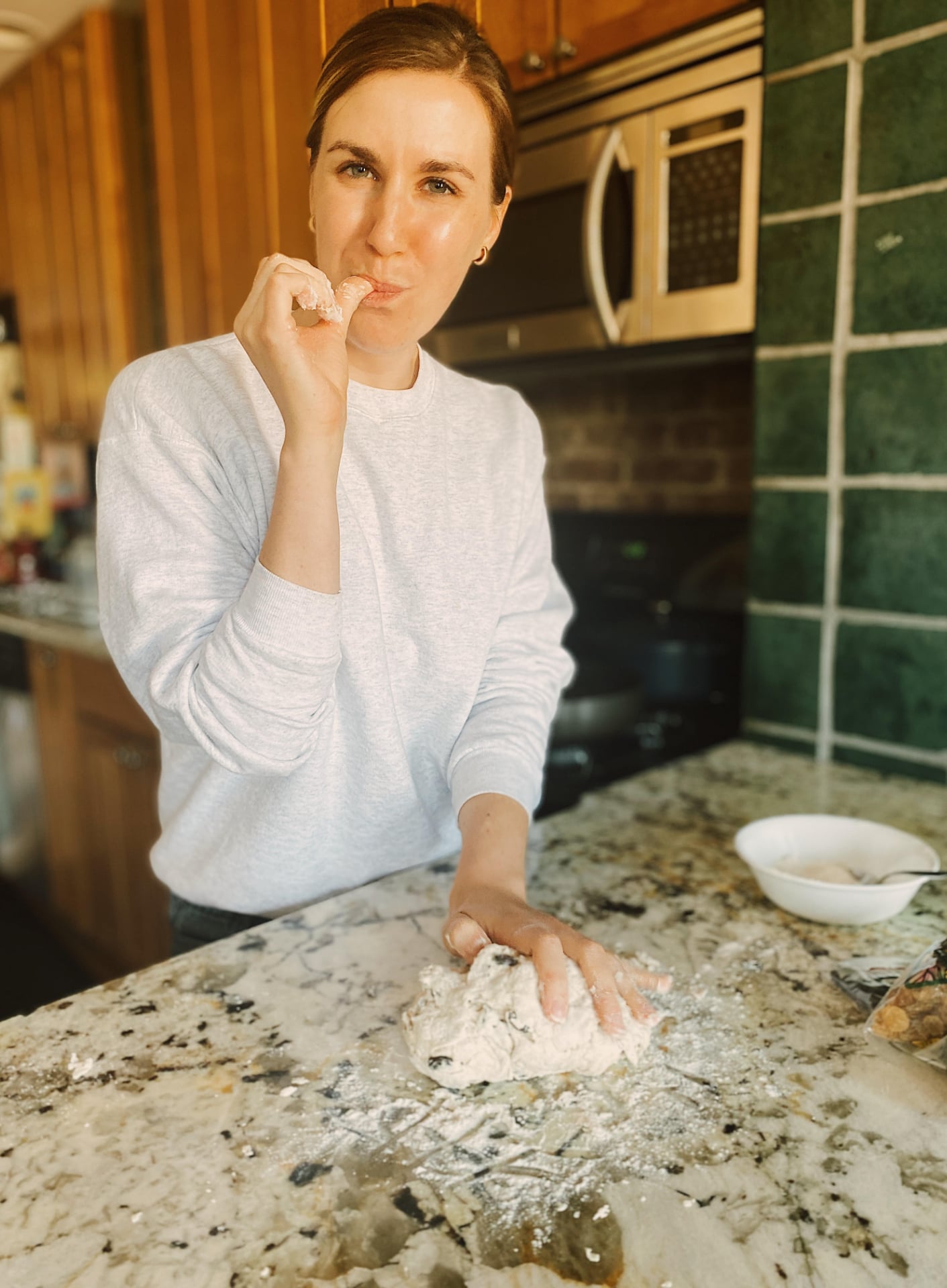 Justine Doiron always kept her cooking to herself until she started a TikTok account in April of this year. Now, she posts colorful and creative recipes that look phenomenal (um, hello, blueberry pancakes and matcha pineapple oats!), and she's garnered over 190,000 followers to date. What you might not know from first scroll-through is that Doiron experienced an eating disorder from age 14 to 23.

"My binge and purge episodes happened about three to four times a week, and it was all-consuming," Doiron, now 26 and a writer and publicist, told POPSUGAR, adding that her eating disorder went undiagnosed for years. "I considered it my biggest and most shameful secret." She's been in recovery since September 2017, and she feels "almost completely healed" from the cycle she was in. She purposely never uses the word "healthy" to describe any of her recipes because, she explained in the TikTok seen ahead, she never aims to pin one food against another.

Doiron made the conscious decision to refrain from using the word "healthy" because she says "healthy means something different for every person," and she doesn't want to imply "that if one food is healthy, another isn't." She continued in the video below, "And I think a part of my struggle with this word is that diet culture has taught us that healthy means we have to restrict or limit or monitor ourselves, and when I was recovering from my eating disorder, I had to completely reframe that notion to 'What can I add to this that will make me feel good?' 'What do I want more of in this moment to make me feel my best?'"

♬ Send Me on My Way - Guy Meets Girl

While Doiron told POPSUGAR she truly can't speak for everyone with an eating disorder because each experience is so different, she can say personally that "any labeling, commentary, or classification of food can be unnecessary and potentially harmful to someone who is trying to develop a neutral approach to food," which is what she had to do in her recovery process.

"I just want everyone who comes to my page to see that my recipes are food-positive, diet-culture-free, and designed to add more to your life, not less."

It took baby steps to get to a good, "safe" place with food "because for so long, eating freely was something that terrified me," Doiron explained. Once she felt increasingly confident that she wasn't "going to spiral into a disordered behavior," she slowly started working on removing all labels and judgments from the types of food she was eating. "Don't get me wrong, I think certain foods have a huge impact on how we feel, but we need to first make peace with all foods to later understand the cues, cravings, and signals that our body is giving us," she said.

"And when I say 'healthy' is something different for everyone, this applies to mental, emotional, and physical health, which is why I'm hoping we can learn to redefine the term, or at least not lean on it so heavily when discussing food and food choices," Doiron said. She's a proponent of intuitive eating, Health At Every Size, and the antidiet movement, but, above all else, she aims for her social media presence to help people realize they can have a good relationship with food — and that meals can be fun. "I just want everyone who comes to my page to see that my recipes are food-positive, diet-culture-free, and designed to add more to your life," she said, "not less."