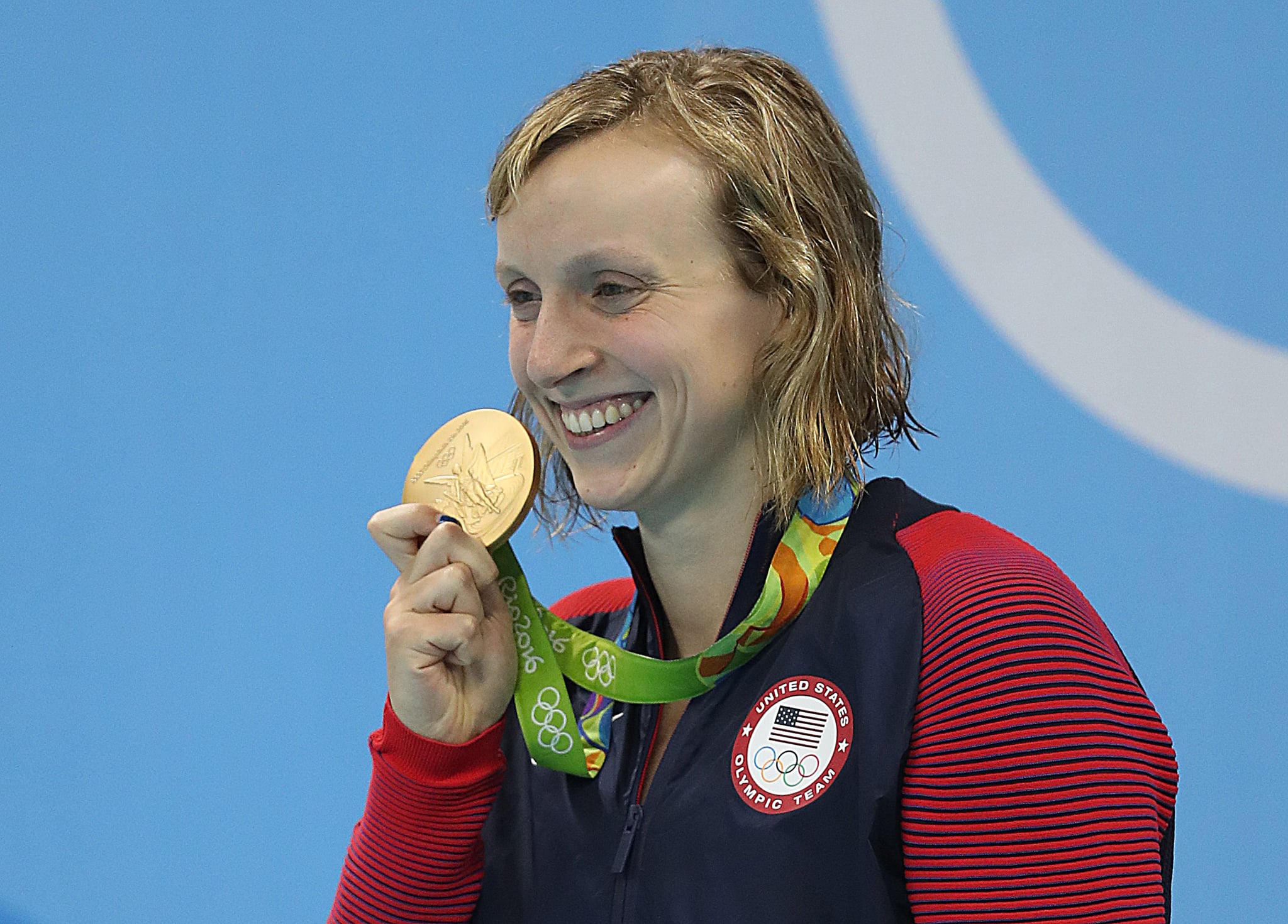 You can't gain confidence overnight, but five-time Olympic gold medalist and swim phenom Katie Ledecky has learned how to embrace self-belief throughout her career. "Behind the blocks, before the races, of course I'm nervous just like everyone else. I have that nervous excitement in my stomach," she told POPSUGAR. "And I think back to all the hard work that I've put in and the confidence that I have in my training and knowing that I'm ready to compete." It's her coaches who helped instill that tenacity, reminding her that she belonged in every stage of her career no matter what age.

Reminiscing on her first Olympic appearance at the London 2012 Games, Ledecky recalled feeling that sense of assurance after her preliminary race. She said that though she had nerves prior to prelims, once she made it into the final, "I just felt like I had no pressure and I felt like I belonged, and I just went out there and I had a lot of fun competing." Spoiler alert: at just 15 years old, she claimed gold in the 800-meter freestyle. "I give a lot of credit to my coaches over the years for really emphasizing that you belong at each stage that you qualify for," she said. "And I'm sure there will be a lot of young swimmers on the team this summer, and I hope that they really feel like they belong, and hopefully I can help them feel that when they get to Tokyo."

Confidence is also behind Ledecky's partnership with BIC and the brand's Soleil Sensitive Advanced "Game On" campaign, she stated. "We're talking a lot about confidence and really hoping to inspire people to work hard and build up that confidence so that you're ready when the time comes," she said. "For me, that's at the Olympics, but everyone has those big moments out there that they're working toward."

Ledecky, now 24 and an official psych graduate from Stanford, constantly pushes to top the world records that she sets. Attempting to one-up herself, she said, is both fun and challenging. "Each time I do it, it gets harder and harder to break that next record. It's really not about records. It's just trying to be my very best," she explained (fact: she has beaten the 1,500-meter freestyle world record she set in 2013 on five different occasions since). "I know that I can't break a world record every time I hit the pool, even if everyone kind of expects that of me, or if people think that I do. It takes more and more work physically and mentally to get there."

Aside from swimming, Ledecky participated in a list of activities growing up, including piano, Irish dance, basketball, and soccer. It wasn't until she broke her arm playing basketball in fourth grade gym class that she realized her passion for the sport that she now triumphs in. She called it a swimming career turning point: "I started picking swim practice over basketball practice if the two were at the same time, and that's when I really realized how much I loved swimming, when I was in a cast and had to kick with the kickboard with a plastic bag over my arm."

Preparing for the Olympic trials in Omaha, NE, this June — and to make her third Olympic team — is about training (per week, she completes 10 swim practices and lifts three times), but it's also about what comes in between her sessions. That means getting proper sleep and eating well because "all those little things really impact my ability to be the best version of myself," Ledecky said. "I just get goosebumps when I think of walking onto that pool deck in Omaha because we only get to do that every four or five years." She'll be focused on the following events: 200-, 400-, 800-, and 1,500-meter freestyle races and the 4 x 200-meter freestyle relay.

Ledecky doesn't think she'll stop with Tokyo. She hopes to compete through 2024 and, perhaps, at the 2028 Olympics in Los Angeles. "But one step at a time," she said. "Getting to Tokyo and just enjoying every day I get to do what I love."

Sports
US Swimmer Anita Alvarez Opens Up About Fainting Underwater: "My Health Is Good"
by Yerin Kim 1 week ago

by Amanda Prahl 12 minutes ago