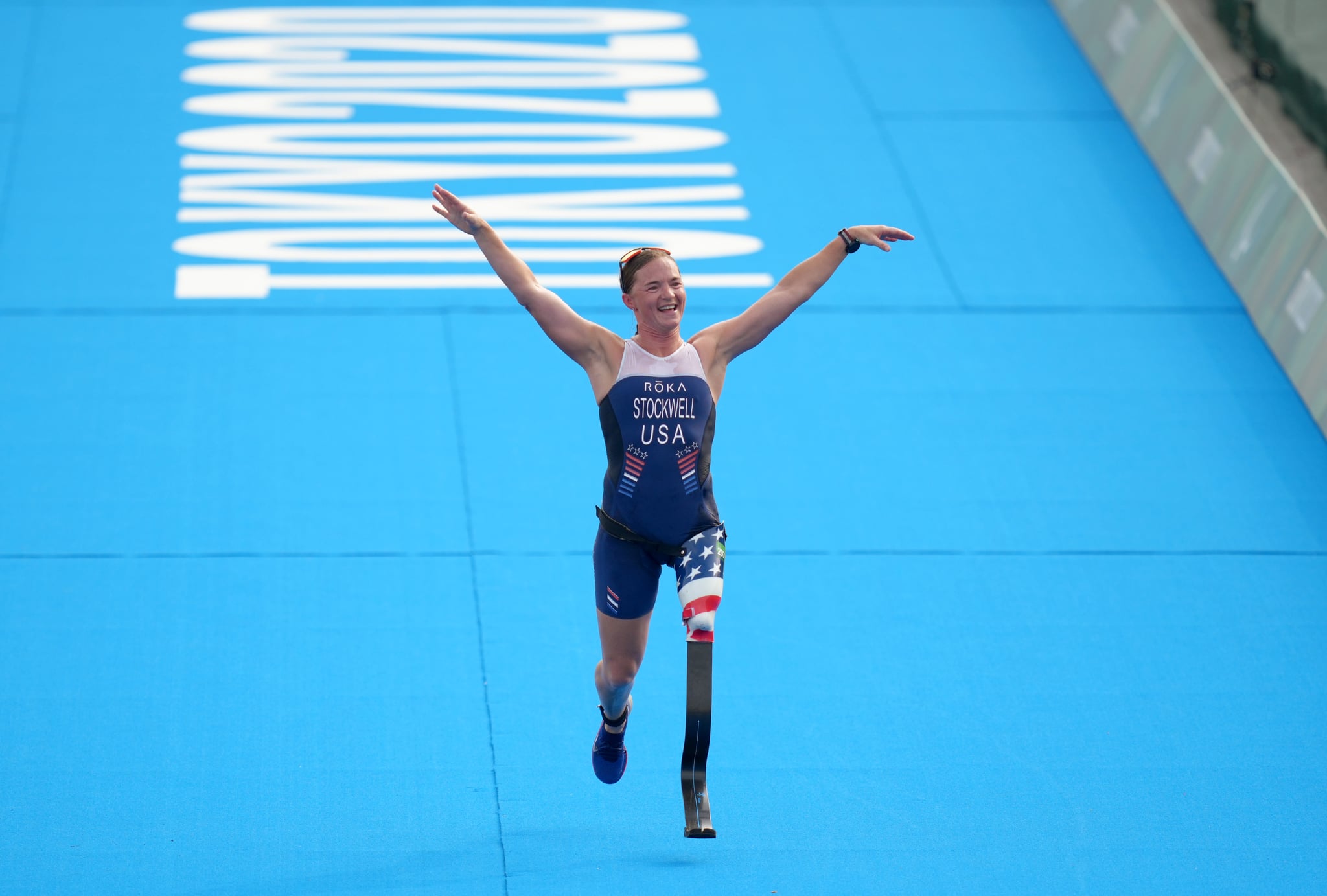 Melissa Stockwell didn't quite know what the outcome would be when she readied herself on the Tokyo Paralympic triathlon course, preparing to compete in her third-ever Games. Regardless, she was happy — and beat the odds — to be there. Half a decade prior, at Rio 2016, she won a bronze medal. Now, a bike accident that fractured her back eight weeks before the Paralympics meant that Stockwell anticipated her performance wouldn't be her fastest. "It was just more about doing everything I could to have the best race that I could have to be proud of it," she told POPSUGAR.

"The doctor had told me, though, 'It's the best place to break the back. And there's a possibility that you could still compete in Tokyo.' I kind of took that mindset and ran with it," Stockwell, 41, explained of her injury. The perseverance it required to push through was a familiar feeling, too. Losing her leg when stationed overseas in Iraq 17 years ago essentially prepared her for this adversity, she said, noting: "Losing a leg and breaking a back are very different, but they're still injuries that you don't expect that kind of come out of nowhere."

Stockwell, who was also a flag bearer at this year's Paralympic opening ceremony, ended up fifth in the PTS2 Paralympic women's triathlon event. However, smiling mid-race despite the fact that she could tell a podium finish was out of reach counted as a victory in itself, she said. She wasn't sure she could even run the entire 5K portion, and when she did, this was another win for her.

After her performance, Stockwell stated on the Olympic Channel broadcast that there was "no point in not believing" she could recover in time for Tokyo. Being an athlete her whole life — she did gymnastics through high school, then competed in her first Paralympics for swimming at Beijing 2008, followed by second (2016) and third (2021) Paralympic appearances in triathlon — set her up for this forward-looking and determined mentality, she said. "I've learned if you believe that you can do something, that you can surprise yourself by what you're able to do." And, through Stockwell's journey of switching athletic paths from strictly swimming to triathlon, she realized people don't give themselves enough credit for what they're capable of achieving. That's a lesson she often shares with her two kids: "Don't tell yourself you can't do something until you try it."

Stockwell is a brand ambassador for Chapstick, which is actually selling limited edition American Flag sticks (made with the original formula, Stockwell's favorite) in support of United States troops: specifically the nonprofit Operation Gratitude. American flags were a big part of one of Stockwell's proudest moments as an athlete, so the initiative, she said, is fitting.

"I've learned if you believe that you can do something, that you can surprise yourself by what you're able to do."

Back when she won her triathlon bronze medal in Rio, Stockwell's teammates Allysa Seely and Hailey Danz claimed gold and silver (they each defended those titles in Tokyo). The Rio race so happened to be on Sept. 11, which made this USA sweep even more significant, she said. "It'll forever go down as one of the greatest moments of my life. . . . All of us up there, three American flags going up, just kind of everything it took to get there," she described. "Showing the world that we're the United States and we're going to get out there and show what we can do. Showing how much ability is in a disability."

When Stockwell thinks about her future in sports, her trajectory isn't clear. We spoke at the beginning of the month, shortly following her return from Tokyo, and she was still processing her experience at that point, saying she wanted to focus on being a mom. She recently reiterated this on Instagram, writing, "As far as athletics? I will always be an athlete, that's a sure bet. But I think I need a little more time to digest the past five years and figure out where I'm headed next with it. Paris 2024? Another Ironman? Being content with being a weekend warrior? Or maybe just sitting around eating all the ice cream. I don't need to decide right now and that gives me some solace. But whatever is next will be hard to top what's come before. But I'll sure give it a shot."

Becoming a Paralympian, Stockwell told POPSUGAR, is surreal, and once you compete in your first Games, that title remains always. "I remember my coach in Beijing, right after I swam, I didn't do very well athletically, but he said, 'It's knowing you're a Paralympian forever. No one can ever take that away from you,'" she recalled. "And that stuck with me."