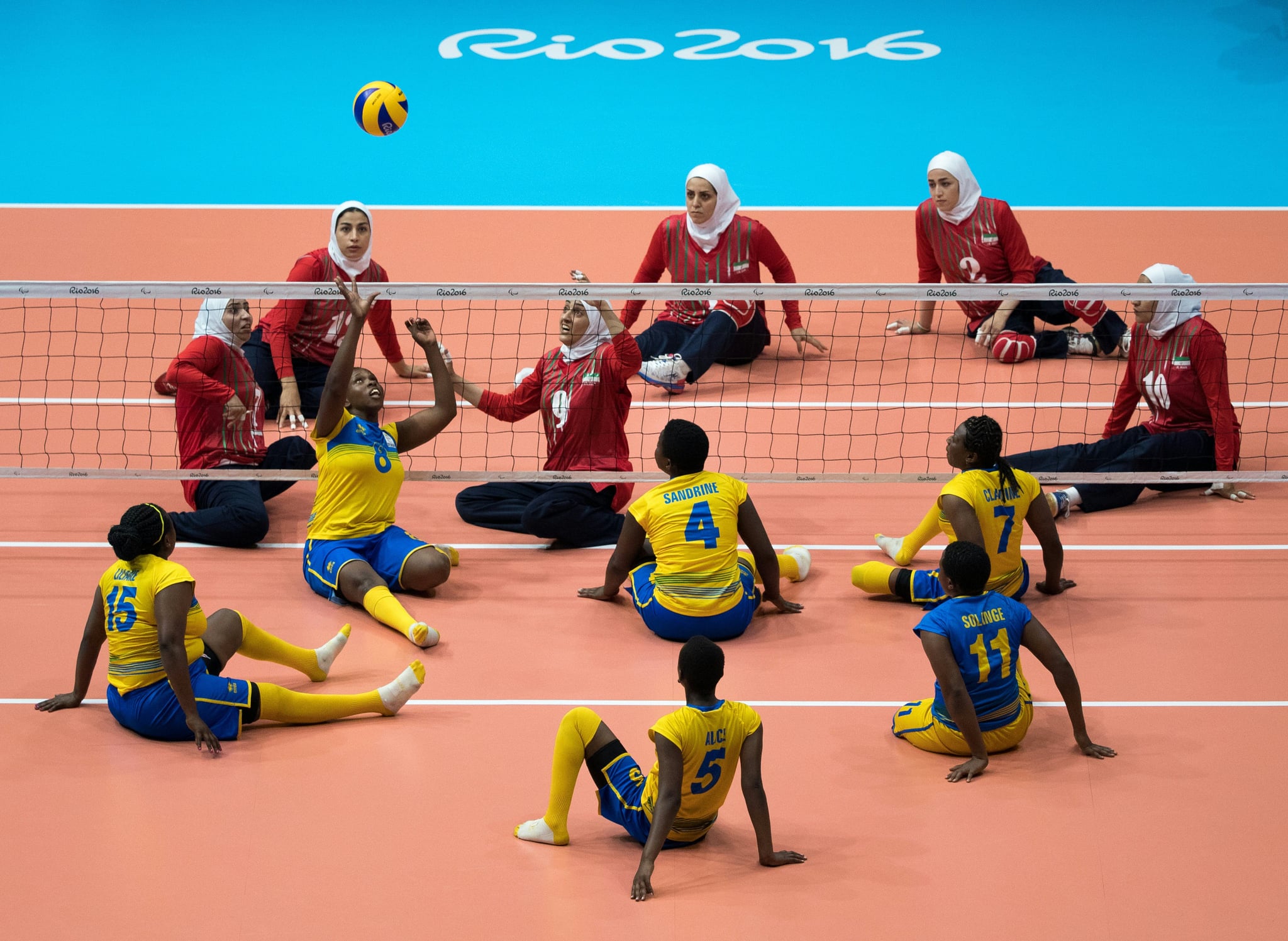 Sitting volleyball, a sport that, at the international level, is for athletes with physical impairments, was officially added to the Paralympics on the men's side during the Arnhem 1980 Games. It wasn't included as an event for women until over 20 years later at Athens 2004. According to Paralympics.com, it originated in 1956 in the Netherlands, where players combined the rules of volleyball and sitzball, a German sport with seated players, sans net. Now, over 10,000 athletes globally play sitting volleyball, World ParaVolley notes. Keep reading to find out more about this fast-paced and team-oriented sport.

Sitting volleyball is a form of volleyball where the athletes play seated and the net, compared to its volleyball counterpart, is lower. The court is also smaller. Rules are similar to the rules outlined by volleyball's international governing body, Fédération Internationale de Volleyball (FIVB), with some modifications. Teams of six sit on opposite sides of the court. Athletes must keep some sort of contact with the floor — between their bottoms and shoulders — during field of play. "The exception is that 'lifting' off the floor is allowed if the ball is played in a defensive action below the net height at the moment of ball contact," states Olympics.com.

Three touches of the ball are allowed, in addition to what Olympics.com calls a "legal block," before athletes must hit the ball over the net. Players also cannot, in most cases, hit a ball two times in a row. There are two classes, or classifications, of disability for athletes, and impairments can exist for upper or lower limbs (or both): VS1 for generally more severe impairments than athletes in VS2. Teams are permitted up to two VS2 athletes, but only one can play on the court at a given time (Team USA's Kaleo Maclay is a VS2 athletes).

How Is Sitting Volleyball Scored?

A maximum of five sets are played in a match — victory is claimed by winning the best of five sets — and a team wins a set by reaching 25 points, or 15 points in the fifth set if needed, with at least a two-point lead. If teams are tied at 24, they play until there's a two-point lead, the sitting volleyball rules from World ParaVolley state. Points are scored in a number of ways: a team successfully hits the ball over the net and onto the ground of the defending team's court, or when the opposing team "commits a fault" or gets a penalty.

Why Does 1 Sitting Volleyball Player Wear a Different Shirt?

The libero focuses on defense in sitting volleyball and can replace any player in the back row without counting as a substitution. Like its volleyball counterpart, this one player wears a different jersey than the rest of the team.

Sitting Volleyball at the Tokyo Paralympics

For the Tokyo Paralympics lineup of sitting volleyball teams, there's a pool of eight men's squads — Bosnia and Herzegovina, Brazil, China, Egypt, Germany, Japan, Iran, and RPC — and eight women's squads — Brazil, Canada, China, Italy, Japan, Russia (aka, Russian Paralympic Committee), Rwanda, and the US. The Chinese women have won Paralympic gold at every Games since Athens 2004 except for Rio 2016, when the US women clinched gold. On the men's side, Iran is the defending title holder and also has the most gold medals in Paralympic history. Let the Games begin!