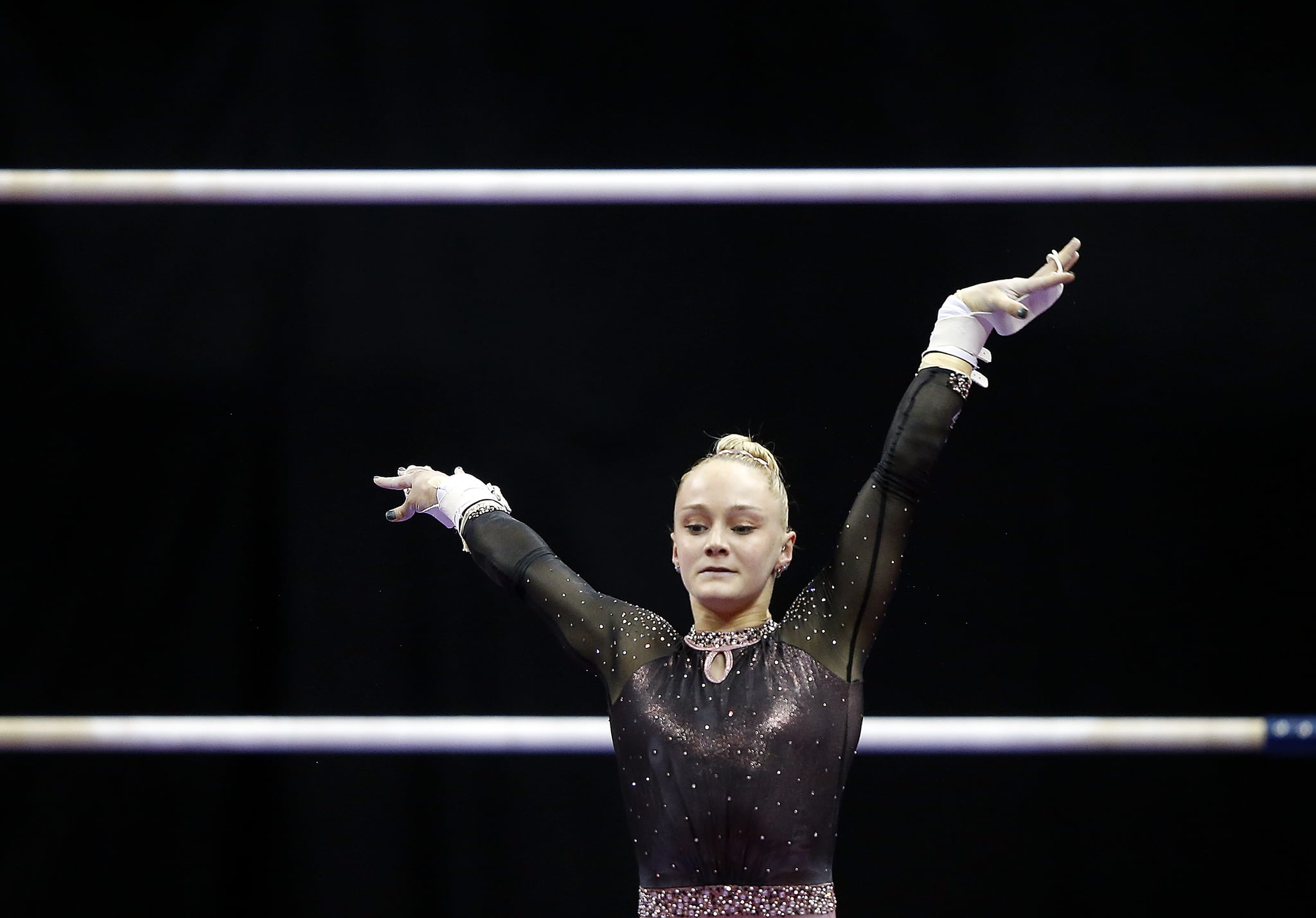 Riley McCusker is a featured athlete in YouTube Originals' Defying Gravity: The Untold Story of Women's Gymnastics from Main Event Media and in partnership with Glamour magazine. She's a member of the women's senior national team and is a 2018 World team champion. McCusker pulled out of the chance to represent Team USA at last year's Worlds because of rhabdomyolysis, which is the breakdown of muscle linked to overexertion or injury and can cause kidney damage. Notably, she took home gold on bars at the 2019 Pan American Games — and she does a unique bars dismount (we'll get to that later).

Where Does Riley McCusker Train?

McCusker grew up in New Jersey and trained with now-barred coach Maggie Haney at the gym MG Elite. At the beginning of 2020, the 19-year-old gymnast moved to Arizona to train with fellow national team member Jade Carey at the Arizona Sunrays facility in Phoenix, AZ. McCusker is now coached by Carey's father. Back in April, Haney was given an eight-year suspension by USA Gymnastics on accusations of verbal abuse and mistreatment of athletes.

McCusker is committed to the University of Florida, but she deferred until the fall of 2021 due to the postponement of the Olympics. "Starting my life as a Florida Gator in 2020 has been my ultimate goal for the past five years," she said in a statement in May. "But, when the world quarantined to protect humanity a few months ago, another big goal of mine was delayed."

Is Riley McCusker Going to the Olympics?

McCusker said Tokyo 2021 is her goal. "I've been working for it my whole life, and honestly, I'm going to put everything I have into it," she stated in Defying Gravity. Ultimately, four gymnasts (not the usual five) will be selected for the team competition, and two will be selected for individual spots to vie for medals outside of the team competition, meaning they can vie for medals in the all-around or specific events, according to NBC Sports. Carey, for example, thanks to her floor specialty World Cup results, has technically qualified for one of those individual spots, the outlet reported.

It remains to be seen who will be picked for the team competition at this point, especially given the fact that 15-year-olds who weren't eligible for the Olympics in 2020 now have eligibility in 2021. The field is competitive.

This is McCusker's routine from the 2018 World Championship, and you'll see here that her dismount is essentially a double backflip (in a tucked position) with a half twist in the beginning of the skill (a half-turn into a double tuck). According to experts in Defying Gravity, she is only one of two people in the world who does this dismount. It's referred to as "The Fan," a dismount named after Fan Yilin of China.

McCusker is now training a dismount done by gymnasts such as 2008 Olympian Nastia Liukin, where the half twist happens on the second flip off the bars as opposed to the first (so it becomes a double forward tuck, half out). We're impressed, to say the least!

We can't wait to see McCusker and other elite gymnasts like Sunisa Lee, Morgan Hurd, Simone Biles, MyKayla Skinner, and more compete for a chance to represent the US in Tokyo. Though the Olympic trials next summer are a ways away, they'll be here faster than Biles can do a triple backflip.