Hannah Hart appears to do it all: host several shows, star in full-length films, publish books (yes, plural), and still have time to cook at home, date, and otherwise be a healthy, thriving human being with a positive message to send her 2.5 million-plus fans. How does she juggle it all with such grace? In honor of the season two release of While the Water Boils, a YouTube series hosted by the vlogger herself in collaboration with Barilla, I spoke to Hannah about her long list of goings-on and upcoming releases as well as her secret sauce for staying sane amid a busy schedule.

She stars in the recently released Dirty 30, a Bridesmaids meets Sisters-type flick that centers on an epic birthday party. Despite the film's seize-the-day theme, Hannah is all about staying in. "Honestly, I would say the one major thing I've learned from my 20s is the importance of cooking at home, because it's so tempting to want to go out to eat every single night. But I tell you, once you hit 24 or 25, you can't go out to eat every night like you use to. Not only do you spend a lot of money, but it's just not as good for you as it is to go home, decompress, and make some food," she said.

Hannah's found a semblance of balance, especially when it comes to food, due to her upbringing. She shared, "I had a single mom for a long time and we were pretty broke, so we were always doing dollar-menu meals, because it was fast and easy and everyone could get fed. The 99 cent junior bacon cheeseburgers at Wendy's were my life." She added, "I feel so blessed to be able to eat well, to have fresh fruits and vegetables, to cook my own food, [and] to make meals for friends. This is a total privilege."

Those who watch Hannah's YouTube series My Drunk Kitchen know she prides herself on sharing approachable recipes. There's a reason for that. She explains, "Unfortunately, because of lack of time and lack of money, it really makes people feel like they can't have good, healthy, balanced meals." Even in Hannah's real life, her go-to dinners are very easily re-created. "If it's just me and a lady, I try to make something a little classy that's light and really tasty, like an angel hair pasta [and] cherry tomatoes," she said. But if she's cooking for a group, it's likely spaghettata, Italian for a large spaghetti dinner served to a party, dressed "just really simple, chopping up some fresh herbs, parmesan, garlic; boom, done. Everybody loves it. It's super satisfying." Her favorite recipes from the show also include enchiladas and taco potatoes (with Tyler Oakley). 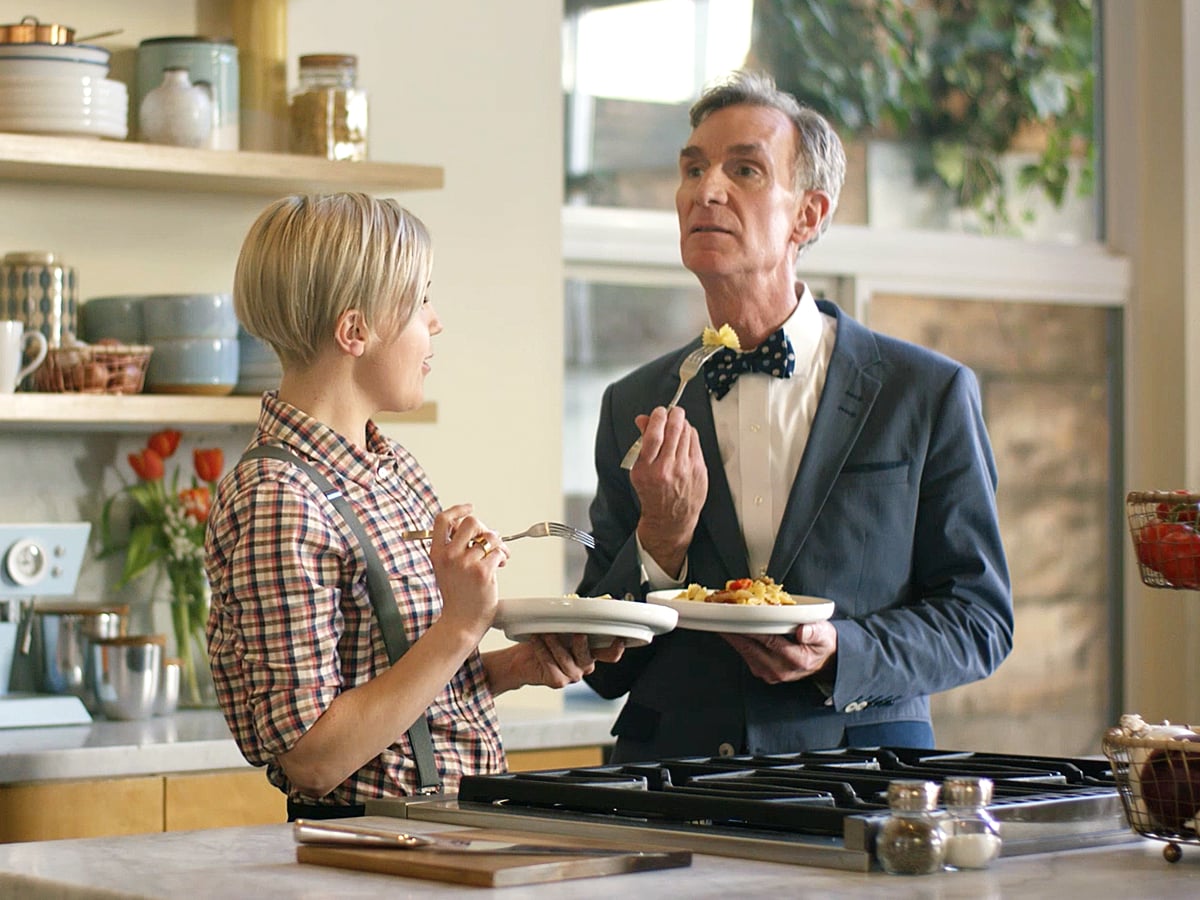 Even more mouthwatering recipes can be found on Hannah's latest YouTube series, While the Water Boils. Hannah gushed about one in particular, "I'm a real sucker for farfalle, the bow-tie pasta with Bill Nye," that's seasoned with caramelized onion, roasted red bell pepper, and an ultrarich sauce made from egg yolks, romano cheese, and parmesan. Though, for Hannah, there's a secret ingredient to any dish that doesn't have to do with food at all. "I think that the quality of the meal really, really depends on the quality of the company you keep. Fortunately, every guest — Theo Rossi, Lizzie Armanto, Wanda Sykes . . . every single guest that we've had was fascinating, passionate, and just such a pleasure to talk to and learn from."

Hannah is soon to be seen beyond YouTube as she's producing a travel series on TV with Food Network. Not much has been revealed about the untitled, six-episode show other than there is a budget component and it may be released late this year. Hannah hesitated to uncover any new tidbits, but she did share this sentiment: "I'm really excited about it [and] for people to see it. I feel like Food [Network] has been an incredible partner so far. They really let me have a lot of creativity with it. I feel like a lot of times, we're working up to this moment of doing a TV show, and I feel so grateful that this moment's happening right now." 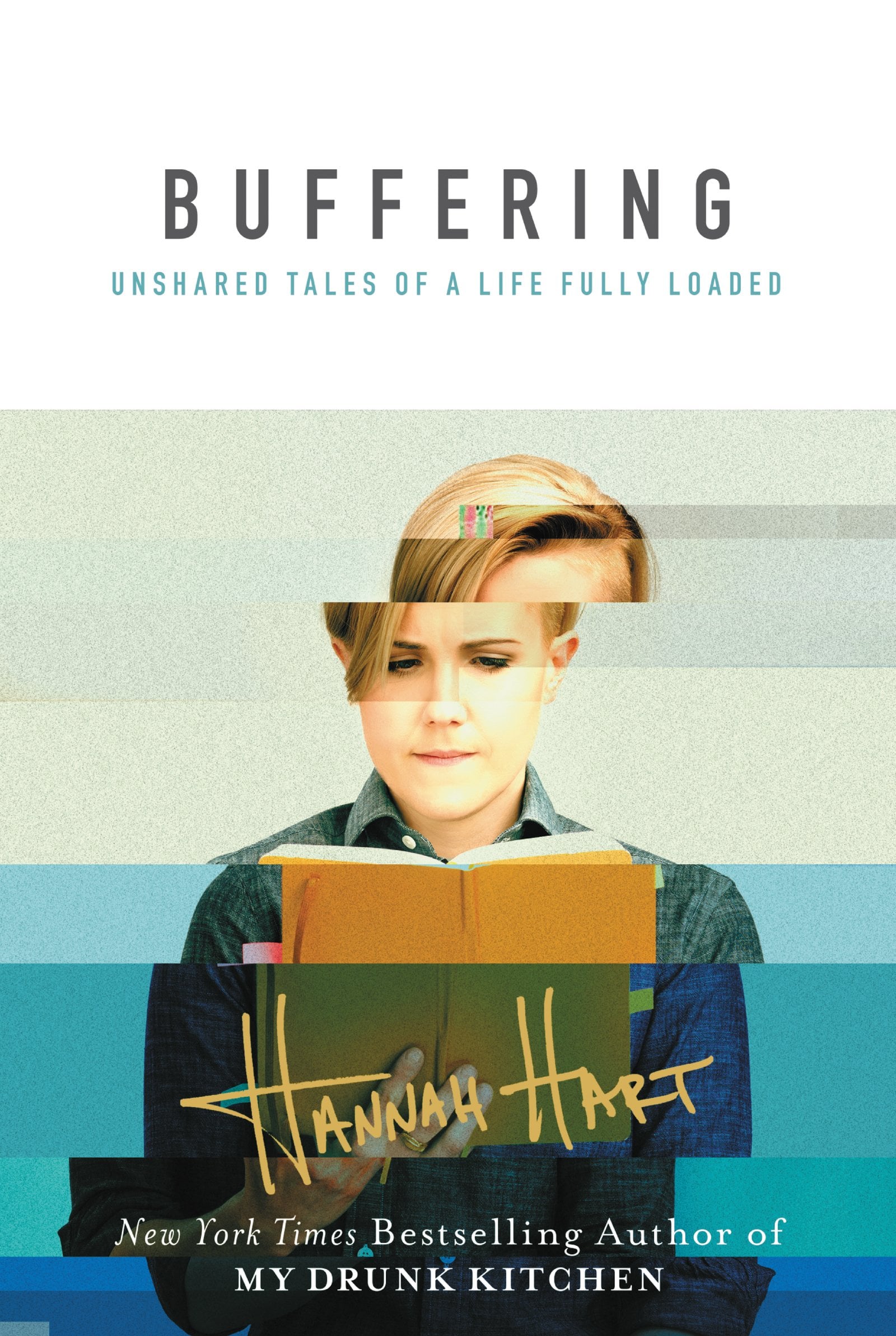 But that's not all for Hannah. She's publishing her second book, Buffering: Unshared Tales of a Life Fully Loaded ($23), on Oct. 18 and had this to say about it:

"Yeah, Buffering is super intense. It is my first stab at sharing some aspects of my life that can't be condensed in a four- to five-minute vlog. I'm a big big fan of narrative memoirs; that's the type of book I like to read. The Glass Castle is one of my favorite books of all time. All of the work by David Sedaris is obviously super wonderful. I feel so honored to be able to have this chance. There are so many people with such rich stories out there, so many aspiring writers, who wish that they had the opportunity to share their stories. I feel a real responsibility to do my best at sharing mine."

The biggest challenge Hannah faced when writing the narrative memoir is "having to maintain the other five aspects of my career simultaneously." How does she do it all? First, through light exercise. "I'm a big believer in 30 minutes of movement every day. So I make sure if I don't get out and take a long walk, which is my preference, I [get] on the elliptical for 30 minutes. So what if I walk off only lightly sweaty? Guess what? It's better than absolutely nothing." This is just one of many of the ways she's committed to the "marathon not the sprint." She added:

"I go to therapy a lot. I also drink a lot of water and I eat well. I try to treat myself with as much respect as possible. I want to have a career. I want to do this for the rest of my life and so I have to start taking it seriously right now. This isn't a flash in a pan, no pun intended. This isn't just a quick moment in my life. I wanna make this the course of my life."

Hannah takes care of herself so she has the energy to share this powerful message: "I'm out there to promote the idea that you can be honest and that you don't have to pretend to be anybody that you're not. No matter how good that looks, it'll never feel as good as it looks . . ."

Recipes
These Banana Oat Pancakes Are Packed With Rainbow Sprinkles, So Feel Free to Make a Huge Stack
by Ashley Ortiz 10 hours ago