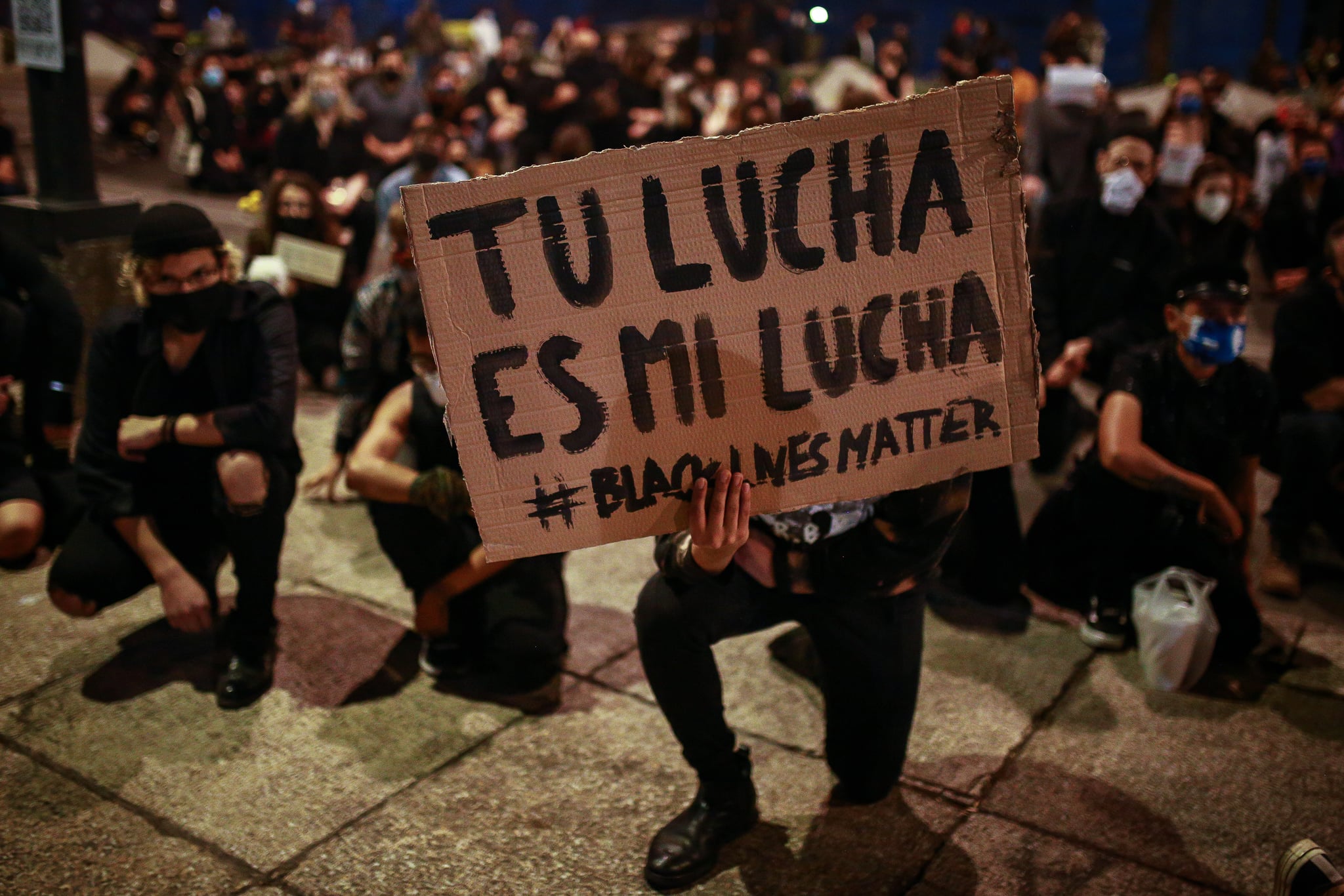 Latinx pushes for equality in the United States have long overlapped with Black-led movements. It's important to point out that many of the socio-political strides that have benefited the Latinx community were hard-earned by Black leaders and activists. (The Civil Rights Act of 1964 and Immigration Act of 1965 are just a few examples.) At this critical crossroads, white Latinx have a duty to show support and stand in solidarity with Black Lives Matter.

Now is not the time for empty allyship. That has only gotten us so far in the past. Now is not the time to center white Latinx voices. There are Afro-Latinx who need to be heard. Now is not the time to compare struggles. Both communities undoubtedly face oppression, but anti-Black discrimination and oppression have been a shameful staple of this nation since its establishment. The fight to dismantle white supremacy has been fought for centuries. It is ongoing, and it demands our participation. Ahead, read about some of the ways white Latinx can show up for the Black community.

Related:
Latinx Artists Who Have Shown Support For and Solidarity to Black Lives Matter

For starters, consider being physically present and joining one of the many demonstrations happening across the nation on a daily basis. As many have pointed out, these protests have been invaluable, leading to real change like the reduction of police funds, a move toward dismantling the Minneapolis Police Department, and the removal of various Confederate statues. For those unable to join a protest out of concern for their immigration status or the coronavirus pandemic, there are various ways to show support from home.

Colorism and anti-Blackness are unfortunately prevalent within the Latinx community. Colonialism and the sustainment of Eurocentric beauty standards are in part to blame, but it's on each individual to reject and call out anti-Blackness in its many manifestations, from overt discrimination to microaggressions and seemingly "harmless" jokes or slang.

So, next time you hear someone drop a phrase like "mejorar la raza" — even in jest — be prepared to have a conversation. Literary resources like Black in Latin America and The Afro-Latin@ Reader are helpful recommendations for those who might need more information or historical context. Self-reflection is also key, and it's important to take some time to do an honest assessment of your own past remarks, judgments, or instances of cultural appropriation so that the same missteps are not repeated.

Engage With Friends and Family Members

Though a similar action item, it's one worth explicitly mentioning: engage with your family and friends about these current events. Talk to your abuela who might not understand the Black Lives Matter movement. Talk to your primos who might be apathetic or politically disengaged. Talk to your friends about potentially attending a protest or circulating a petition.

Whereas social media offers a space to disseminate resources with like-minded followers, it's also important to have those difficult one-on-one conversations with loved ones who may share different beliefs. If there's a language barrier or you're missing some of the relevant Spanish terminology, refer to this helpful vocabulary guide put together by Angie Esparza.

As you thoughtfully and productively engage with others — perhaps with more regularity — enlightening one's own self and establishing that foundational knowledge is also essential. Various documentaries and books about systemic and interpersonal racism offer a starting point, but to learn more specifically about the shared histories between Black and Latinx communities in the United States, check out An African American and Latinx History of the United States, Neither Enemies Nor Friends, and The Young Lords.

Fill Your Feed With Intersectional Groups and Resource Hubs

First and foremost, turn to Black-led activist groups or your local Black Lives Matter chapter to remain up to date on nearby demonstrations, relevant civic meetings, and other action items. In addition, consider following and supporting intersectional activist groups, coalitions, and resources like AfroResistance, Gran Varones, Mijente, Latina Rebels, Ain't I Latina?, I Got Your Black, and Blactina Media, to name a few.