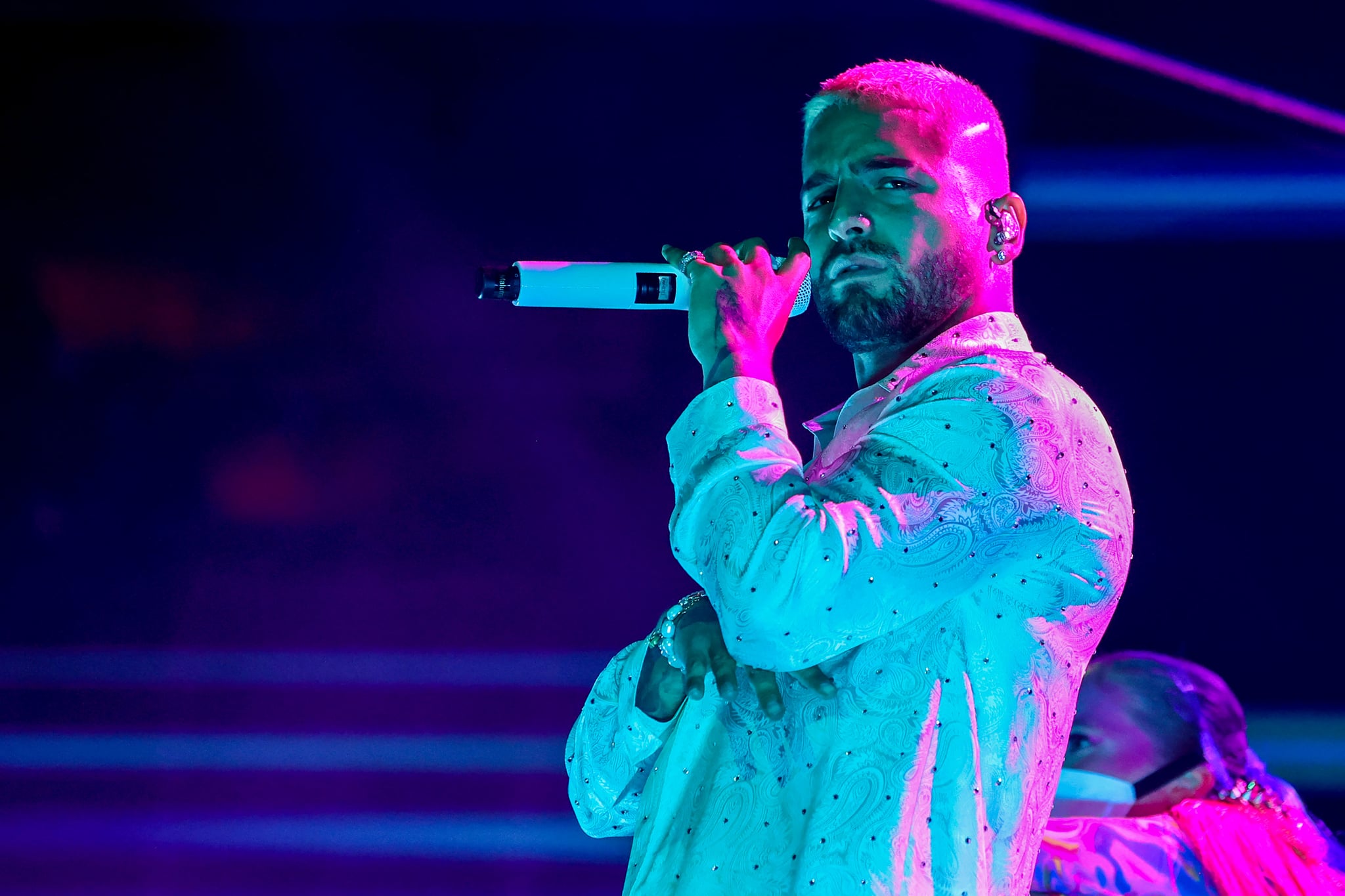 When Maluma said 2020 was going to be a "big year" for him, he wasn't exaggerating. The 26-year-old Colombian superstar made the crossover from the Latin market to the mainstream US charts in 2018, and this was the year that revealed the seeds of his labor. Coincidentally enough, 2020 also marked the 10-year anniversary of when he first began recording music. So to say Maluma had plenty of reasons to celebrate this year is a huge understatement.

While the majority of us used our time at home to practice self-care and hone our banana-bread-baking skills (Chrissy Teigen's bundt cake recipe was my personal favorite), Maluma decided to reinvent himself and create an entirely new alter ego named "Papi Juancho." Papi Juancho was a result of Maluma's first campaign with Calvin Klein (you know, the one with him hosing himself down) and his family's nickname for him, which is a play on his real name, Juan Luis Londoño. Maluma was inspired by Miami Vice, and along with this new vibe came new music, of course.

"I felt connected again with this dreamer that had started this crazy dream of becoming a star, becoming an artist."

Without any warning, Maluma pulled a Beyoncé on us and dropped his fifth album, Papi Juancho, on Aug. 21. The 22-track project was fun, carefree, and heavily influenced by reggaeton, a departure from the pop stylings on his 11:11 album. When I spoke to Maluma earlier this year, he described Papi Juancho as a full-circle moment, referring to the project as "a mix of all the Malumas" he created over the years. "I felt connected again with this dreamer that had started this crazy dream of becoming a star, becoming an artist. I felt that energy from 10 years ago when I started my career," he explained. And when I asked him what message he hoped to send to his fans with the album, his words were clear: "Dreams come true, if you work hard, you're patient, and disciplined. If I can make it, they can make it, too."

Well, his efforts certainly didn't go unnoticed. The album debuted at No. 2 on the top Latin albums chart with 21 million US on-demand streams in its debut week, a career high for Maluma, and his single "Hawái" nabbed the No. 2 spot on Billboard's Latin airplay chart for the year. Oh, and he also scored the No. 1 spot for the third time in his career with his "Pa Ti" collaboration with Jennifer Lopez. So there's that, too. Speaking of collaborations, is there anyone Maluma didn't join forces with this year? From J Lo to The Weeknd to the Black Eyed Peas, it seemed like just about everyone wanted to work with him, and we don't blame them.

But music wasn't the only thing that occupied Maluma's time. In case you haven't heard yet, he is gearing up to make his big-screen debut alongside J Lo in the upcoming romantic comedy Marry Me. The film — which also stars Owen Wilson, Sarah Silverman, Chloe Coleman, and John Bradley — is based on Bobby Crosby's graphic novel of the same name. The plot finds Lopez's superstar character learning of her fiancé's (Maluma) infidelity before going on to marry a random concertgoer (Wilson) instead.

"I think the J Lo-Maluma movement is just starting. After Marry Me, I think things are going to change a lot," Maluma previously said in Billboard's 2020 Latin Power Players issue. "We're making history right now as a Latin community, and I feel very proud of being part of this big, big movement that we're having right now." In addition to the movie, Maluma and Lopez also worked together on the soundtrack, which includes their recent singles, "Pa Ti" and "Lonely." Marry Me is currently set for a May 2021 release after its initial Valentine's Day premiere was pushed back.

"It was important to bring the bright colors, good times, and nostalgic feel during these unprecedented times."

Evidently, a new album and a movie just weren't enough for Maluma, because he then went ahead and dipped his toes into the fashion world by launching a collection with Michelob Ultra Pure Gold. The collaboration leaned heavily on the Papi Juancho vibes, featuring a series of tie-dye and palm-tree-printed T-shirts and shorts. "My life right now is full of colors and beautiful. It is a good energy, and that is how we want to show the fashion line with Michelob," Maluma told Vogue. "I feel like color for me is a different way to heal. That is why I really like the things that I'm doing right now, my fashion, my music. I feel connected by the universe."

He also teamed up with Balmain Creative Director Olivier Rousteing to design a custom suit for his MTV Video Music Awards performance, which later reappeared at the brand's show in Paris during the fall. "It [was] my first time entering the couture design world, and I was fascinated. Working with Olivier is amazing. He knows the value of bringing a story and brand to life," Maluma explained. "For us, it was important to bring the bright colors, good times, and nostalgic feel during these unprecedented times."

One of the things I admire most about Maluma is his commitment to giving back and helping his community, and despite how busy his schedule may have gotten this year, he was quick to mobilize his foundation, El Arte de los Sueños, to help those in need during the start of the COVID-19 pandemic. "I'm a leader here in my country and that's the minimum thing that I can do right now, just help people with my foundation," he told Entertainment Tonight. "When all these things started happening, we realized the kids were starving at home because their parents cannot go out to work. They had no income, no money to get their food, so that's how we started helping. We started sending food to their house."

In 2016, Maluma founded El Arte de los Sueños to help at-risk youth in his native city of Medellín, Colombia, and this past October, he was honored with the spirit of hope award at the Billboard Latin Awards for the incredible work he's done with the charity. Past recipients include Selena Quintanilla, Ricky Martin, Daddy Yankee, and Shakira.

As a Latina and longtime fan, I can't even begin to explain the amount of pride I felt watching Maluma take this year by storm. It was beyond inspiring to see someone at the forefront of pop culture who looks like me and understands the struggle of coming from nothing. Maluma is opening doors for Latin artists who are trying to achieve similar mainstream success, and based on the Latin presence at this year's award shows, people are taking note. We clearly still have a long way to go, but there's no denying Maluma has made his mark.

2020: The Year That Revealed the Seeds of Maluma's Labor  originally posted on POPSUGAR Entertainment News
MusicMaluma

by Taylor Andrews 20 minutes ago