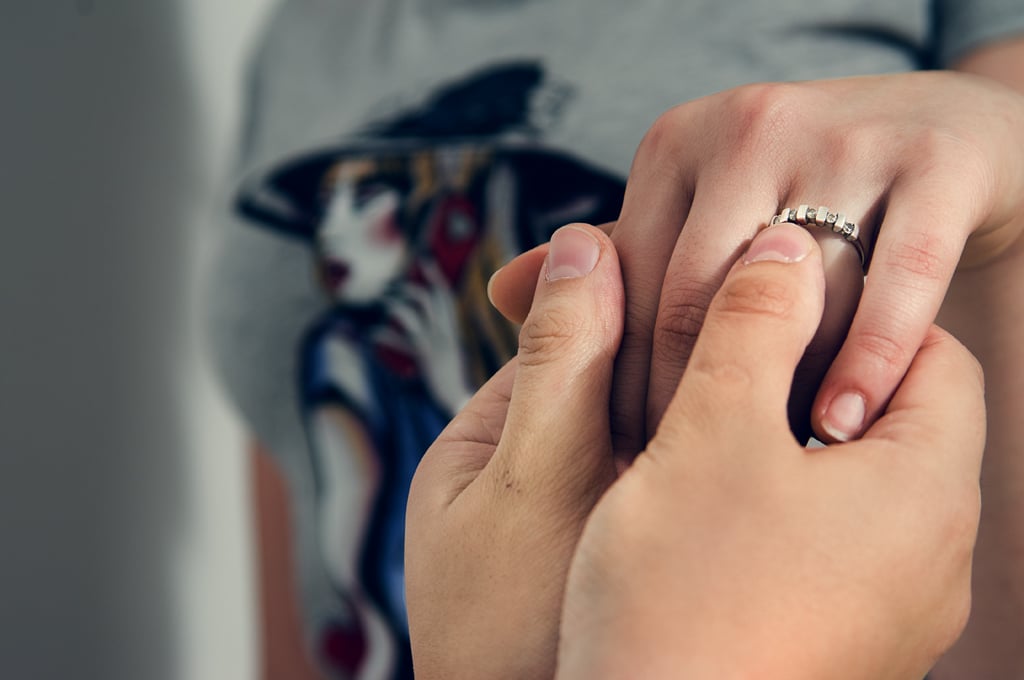 I was 20 years old, studying abroad in Florence, Italy, when I fell in love for the first time. We met while I was out partying with my roommate at the time, and two young men stopped us in the middle of the street because one wanted to hit on her. In their broken English, they asked us to grab a drink at a bar nearby; I was reluctant, but my roommate was all for it. I ended up translating the entire time and didn't think I hit it off with the other guy at all, but at the end of the night, he asked me for my number and I said, "Yes." The next day, he gave me a call and asked if we could go out on our own for dinner and a walk around Florence. I said sure because I thought it would be great to see the city through a local's eyes. We had an amazing conversation during dinner and at the end, he asked if I wanted to see something beautiful and I jumped at the chance, so we took a cab and he took me to Piazzale Michelangelo. If you haven't been to Florence, the piazza has a spectacular view of the city center; you can see the Duomo, Ponte Vecchio, Giotto's Bell Tower, and so much more. Imagine that view at nighttime with all of the lights shining bright; it was the perfect backdrop for our first kiss, and in that moment, I knew our chapter together was only beginning.

We saw each other every day after that and even traveled around Italy together. I met his family, and he met mine virtually. We said "I love you" to each other during a trip to Sienna, and I didn't look back.

I fell head over heels for him, but I knew that my time in Italy was coming to an end.

I fell head over heels for him, but I knew that my time in Italy was coming to an end. We made plans for me to come back for the Summer and until that we would FaceTime, talk on the phone, and text every day. Fast forward five months and he was dropping me off at the airport and kissing me goodbye.

I was back home before Christmas with my birthday just a month away. I felt like something was up because he told me he had sent me a gift and was super excited for me to get it in the mail. I got it a few days before my birthday, but he gave me specific instructions not to open it until the actual day of my birthday when I received his call. I was so pumped to see what it was; I got his call and was ready to rip the envelope open. When he gave me the green light, I was stunned. It was a gorgeous vintage-inspired yellow gold diamond engagement ring. I heard him say "Will you marry me?" in the background. I was speechless because it was the last thing I expected for him to do. Yes, I loved him, but in the moment, reality hit me. We had only been dating for six months at that point, I lived on a completely different continent, and I was still in school.

He asked me again, and I started crying because I knew in my heart that I had to say "no."

He asked me again, and I started crying because I knew in my heart that I had to say "no." I told him that I needed time to think about it and he said, "Why? Don't you want to marry me?" and under my breath I said "no." He told me he couldn't hear me and so I said it louder. I told him that I did love him, but I couldn't marry him because it didn't feel right. I was still in school, didn't have a job, and didn't want to settle down just yet. Understandably, he was upset and told me he needed time to cool off and I told him to take as much as he needed and just call me back when he was ready. I didn't hear from him until the next day, and I immediately apologized and told him that I hoped he understood and if turning down his marriage proposal was a dealbreaker then I had no choice but to accept it. He said that it was because he wanted to be with someone who would have said yes immediately and clearly I wasn't ready for that. I told him I understood and wished him the best of luck; it was the last we spoke. I mailed back the ring and just hoped he received it.

Looking back now, I don't regret it one bit because in that moment in my life, I knew I wasn't ready for marriage, I'm still not ready, and it's been four years. I can't change what happened, but the time we spent together will always stay with me, and I wouldn't change it for the world.