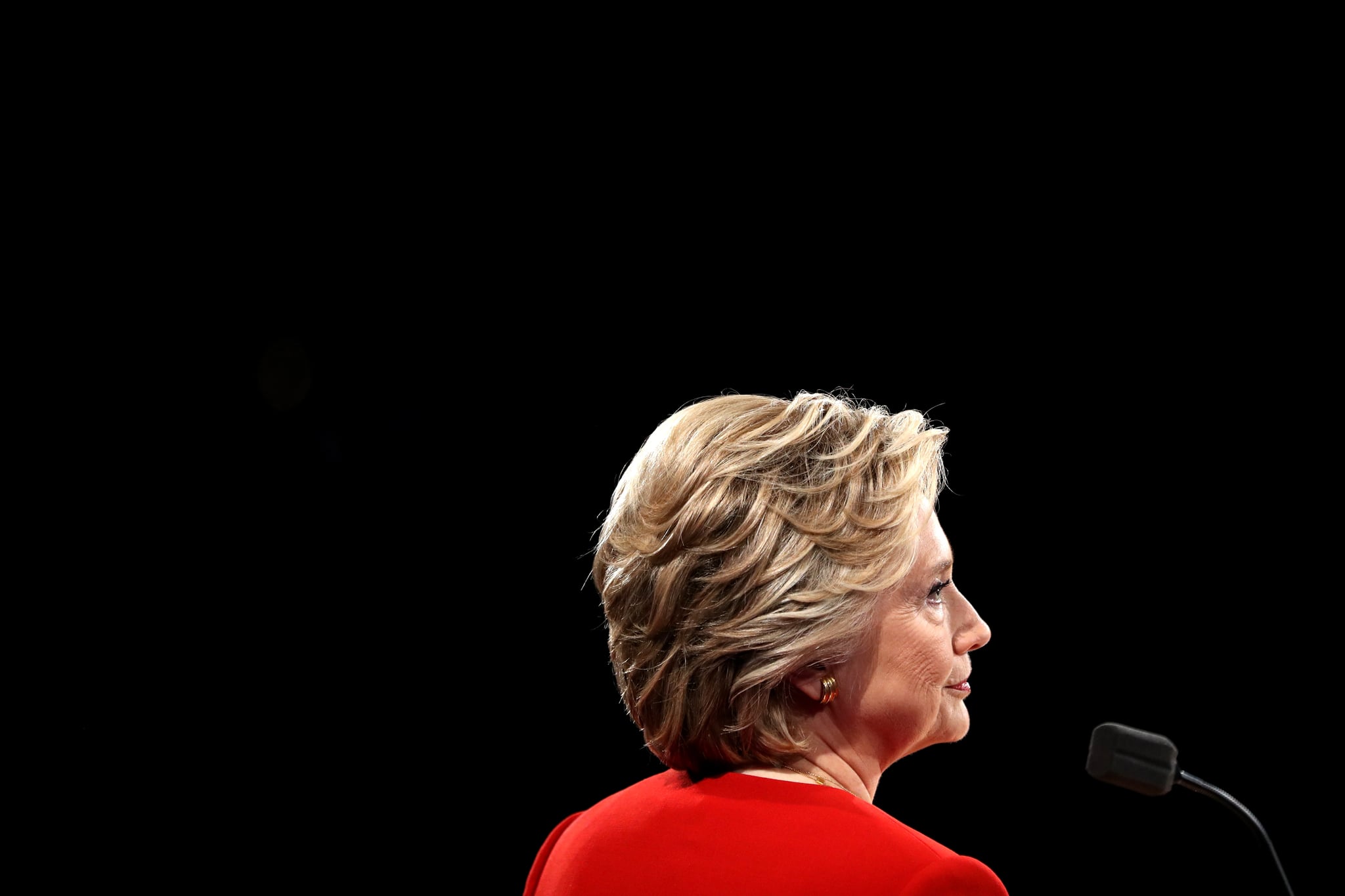 Hillary Clinton already cemented her spot in history as the first woman to win a major political party's presidential nomination, but she still has more firsts to check off her list. Last night, she became the first woman to participate in a presidential debate, and the sexism immediately became apparent. The more defining moment, however, was the skillful way she handled it.

We saw more than one moment when Clinton was subjected to Donald Trump's chauvinism. Perhaps the most evident demonstration of Trump's lack of respect was in the number of times he interrupted Clinton. While Clinton interjected 17 times, Trump interrupted Clinton a whopping 51 times, according to Vox. She remained poised throughout his repeated outbursts, as if she knew they were coming.

Clinton was also forced to defend her appearance. Despite the fact that she has dedicated more than 30 years to public service, she faced questions over whether she had the "presidential look." Toward the end of the debate, moderator Lester Holt asked Trump what he meant when he said that Clinton did not have "a presidential look" earlier this month. Predictably, Trump stood by his claim.

Clinton's response to Trump was inarguable, however. After listing her experience as secretary of state, Clinton landed a final burn. "He can talk to me about stamina," she said, when he "spends 11 hours testifying in front of a congressional committee."

Clinton also took that moment to remind Trump, and the audience, how he has called women "pigs, slobs, and dogs." Specifically, Clinton referenced Alicia Machado, the Miss Universe winner whom Trump tormented after she gained weight.

Earlier in the night, Trump made a more implicit jab at Clinton that many called sexist when he condescendingly asked what he should call her throughout the night. "Now, in all fairness to Secretary Clinton . . . yes? Is that OK? Good, I want you to be very happy. It's very important to me," he questioned. Clinton laughed off the comment and subtly prodded back at Trump during the debate by referring to him as "Donald" rather than "Mr. Trump."

.@realDonaldTrump on calling @HillaryClinton "Secretary Clinton": "Is that okay?...I want you to be very happy." https://t.co/LKkNquN1Gk

"Secretary Clinton, is that okay? I want you to be very happy." Trump can't go five minutes w/o being condescending misogynist #DebateNight

Perhaps most egregiously, Trump made an allusion to Bill Clinton's affairs while simultaneously saying he would not mention them. "I was going to say something extremely rough to Hillary, to her family, and I said to myself I can't do it," Trump said. "I just can't do it. It's inappropriate, it's not nice." Clinton is obviously not her husband, nor is she responsible for her husband's cheating scandals, yet she still faced censure for them. Again, it's hard to conceive that Trump — or any other political figure — would hold a man accountable for his wife's infidelities.

This is what it's like to be the first woman to appear in a presidential debate. Yes, Clinton has forged a path for all women, yet she still encounters plenty of sexism in her life, much like countless other women. Working women in particular can probably relate to being interrupted or shunned by men who think they know better. Ultimately, Trump's behavior last night proved America has many more ceilings to shatter before men and women are treated equally and with respect. But Clinton's calm demeanor and ability to stand up for herself in the face of it are characteristics we can all learn from.