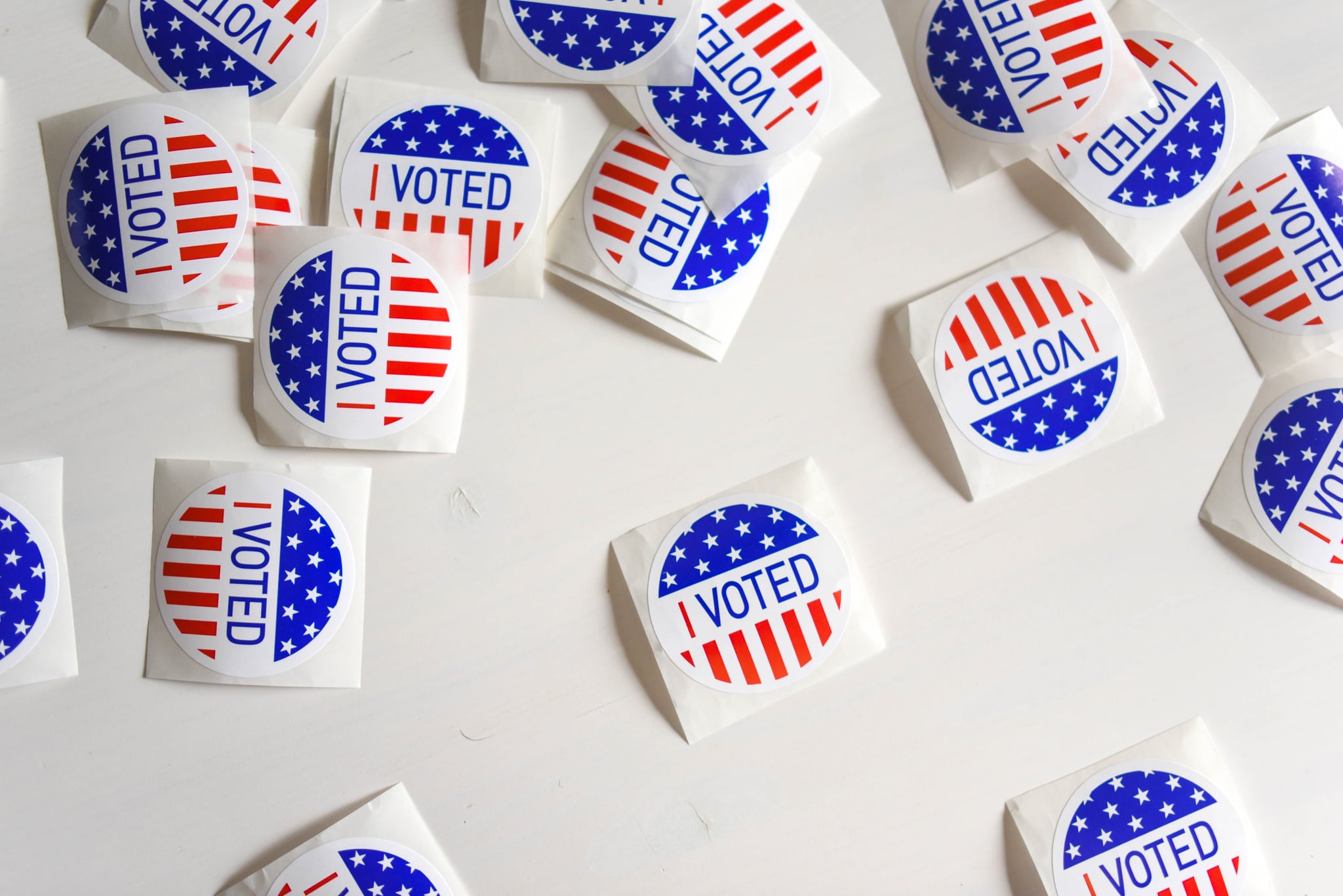 As the presidential election continues to build, it's hard to miss the political surveys, ads, and campaign promises that seem to turn the whole entire world into one big splash of red, white, and blue. Gen Z is especially oversaturated with political information, from conversations with their friends and families to more unconventional sources like TikTok, Twitter, and Instagram. But despite establishing themselves as political forces — by emptying out rallies, starting global movements, and even becoming political icons themselves — the younger members of this generation are still denied one of the most powerful mechanisms of change: a vote.

It's not uncommon for people under the age of 18 to be written off as unprepared for a responsibility like voting, but members of Gen Z have shown that they have a voice and they want to use it. The question then becomes: are we willing to let them? To help you land on an answer, POPSUGAR talked to experts, activists, and passionate young people across the country to further unpack the significance of the voting age and the movement to lower it (or not).

Related:
Experts Explain What's at Stake in the 2020 Election When It Comes to Women's Health

The Debate About Voting Age Has a Long History

The current voting age of 18 was established by the 26th Amendment, which passed in 1971 during the Vietnam War, Brandon Klugman, the Vote16USA campaign manager at Generation Citizen, explained to POPSUGAR. Previously, the voting age had been 21 in the majority of states, but Klugman explained that the movement to lower it really picked up after the draft. "Proposals to change the voting age from 21 to 18 first emerged in the 1940s, and gained steam in the context of the Vietnam War as college students led organizing efforts to lower the voting age," he said. They'd use the the slogan, "Old enough to fight, old enough to vote." Evidently, people in support of lowering the voting age were mainly concerned that the same young people being drafted to serve the country would not be able to vote for the politicians making big decisions about war.

While 18 remains the most standard voting age as of today, there are certain states that allow their residents to vote before they've officially turned 18. States that allow 17-year-olds to vote in primaries as long as they will turn 18 by Election Day include Alaska, Colorado, Connecticut, Delaware, Hawaii, Illinois, Indiana, Iowa, Kentucky, Maine, Maryland, Mississippi, Nebraska, Nevada, North Carolina, Ohio, South Carolina, Utah, Virginia, Vermont, Washington, West Virginia, and Wyoming. However, states like Alaska, Kansas, North Dakota, and Washington also have laws that allow 17-year-old Democrats to participate in their caucus, but do not allow Republicans to participate in their caucus. If the rules seem a little complicated, it's because they are, but you can find out more about the specific voting laws in your state here.

What's the Greatest Argument For Lowering the Voting Age?

Many of the same arguments applied before the passing of the 26th Amendment are still relevant to the modern fight to lower the voting age, according to Katie Eder, an activist from Wisconsin and the executive director of Future Coalition. "In 2020, while we're not drafting young people to war, we're putting the lives of young people at risk in so many ways," she explains. "From gun violence to climate change to healthcare, politicians are making decisions that drastically impact the lives and futures of young people in this country."

The idea that young people should have a voice — and can even lead the way on issues directly affecting their lives — isn't revolutionary. "It's young people, historically, who have propelled the change our society has necessitated in every generation, whether that be when we go back to Little Rock 9, or [when] we look at gun violence and the Parkland students," Emanuelle Sippy, a 17-year-old youth activist from Kentucky and community manager for the Future Coalition, told POPSUGAR. "It's not radical to think that young people need to have a say and our opinions need to be counted." This is the kind of progressive reform Sippy pushes for in her own hometown, and regardless of operating in a more conservative state like Kentucky, she's found that red and blue party lines aren't everything. The most important thing is empowering young people to speak out on the topics that impact them.

Jake Fenner, a recent graduate from Syracuse University in New York, supports lowering the voting age because he believes young people should be able to participate, especially at the local level. "When you're 16, you're likely going to be at home for at least two more years," he says. "You're directly affected by whatever decisions your local leaders make." Spencer Browne, a college senior from Tucson, AZ, echoed that sentiment. "Anyone who pays taxes, drives, [or is] expected to behave as an adult in society, should be treated like one by our political system," he told POPSUGAR. However, he added a caveat that he's not sure we have the societal or education structures in place to support a lowered voting age yet.

On a larger scale, Adolph Brown, PhD, a clinical psychologist and social justice advocate, said that if 16-year-olds are able to vote for laws and lawmakers themselves, they will also be more likely to follow these laws and grow up feeling as though their voices are valued. Klugman, of Vote16USA, added that lowering the voting age to 16 could eventually lead to increased voter turnout. "Voting is a habit and 16 is a better time than 18 to establish that habit and become a lifelong voter," he said. "This will make our democracy more representative and more healthy."

Related:
How to Get Out the Vote — Even Under Stay-at-Home Orders

But, Are Young People Ready For That Responsibility?

A majority of voters seem to think they're not. In a 2019 Hill-HarrisX survey, 75 percent of registered voters opposed having 17-year-olds participate in elections. An even greater portion — 84 percent — opposed allowing 16-year-olds to vote. Of course, as with many issues affecting young people, those under 18 weren't given a voice in this poll — and it's worth noting that the younger participants supported the lowering of the voting age in much greater numbers than older ones.

The most common argument against lowering the voting age is that those under 18 might be more easily influenced by those around them. As Rody Conway, the chairman of the Syracuse University College Republicans, succinctly explained, "Most [16-year-olds] would probably just vote for whoever their parents are voting for." Younger people hear opinions from their parents, friends, teachers, or the media, and aren't as well-versed in sorting through different viewpoints to make up their own mind. "Voting should require a stake in the system, I don't trust that, on the whole, young people will have enough maturity or life experience," Conway explained to POPSUGAR. Jay, a college student whose last name has been redacted for privacy, agreed. "First, I think [the voting age] should be a state issue," Jay said to POPSUGAR. "However, it's important that, as a society, we take precautions to make sure that highly impressionable groups won't be influenced to vote a certain way."

Lowering the voting age would also create legal inconsistencies. "You'd now have these situations where, if you lower the age of voting to 16, are we also going to lower the age to be tried as an adult to 16? I'm not sure that's wise," Jamie Miller, the former executive director of the Republican Party of Florida, told POPSUGAR. "I believe we should make all things 'adult' one age, because just gradually letting people become adults is kind of silly when you look at it through the eyes of the law. It's inconsistent."

Voting is one of the most powerful tools to create change. "There's a great Southern phrase that I was raised on that says 'No one robs an empty store,'" Cory Alpert, executive director of Secure the Ballot and former regional chief of staff for Pete Buttigieg, told POPSUGAR. "Voting rights in general would not be under assault — and I mean that in its broadest sense for age, race, [or] any of the restrictive laws — if voting was not the cornerstone of our democracy."

So it stands to reason that the fight to keep the voting age at 18 is an indication of just how powerful an under-18 voting bloc would be. "Young people's voices are diminished by intentional efforts to suppress young voters and politicians' unwillingness to give them something to vote for," Rev. Dr. William J. Barber II, cochair of the Poor People's Campaign and author of We Are Called to Be a Movement, told POPSUGAR. "If young people want to know how important their vote is, they should just look at how hard some people are working to suppress it."

But no matter what side of the debate you're on, the fervor of discussion indicates that it's a debate worth having. And one thing is clear from the conversation: young people of the current voting age need to utilize their power in both local and federal elections.

To check if you're registered to vote, head to USA.gov. Register today, participate in the conversation, and let your voice be heard.