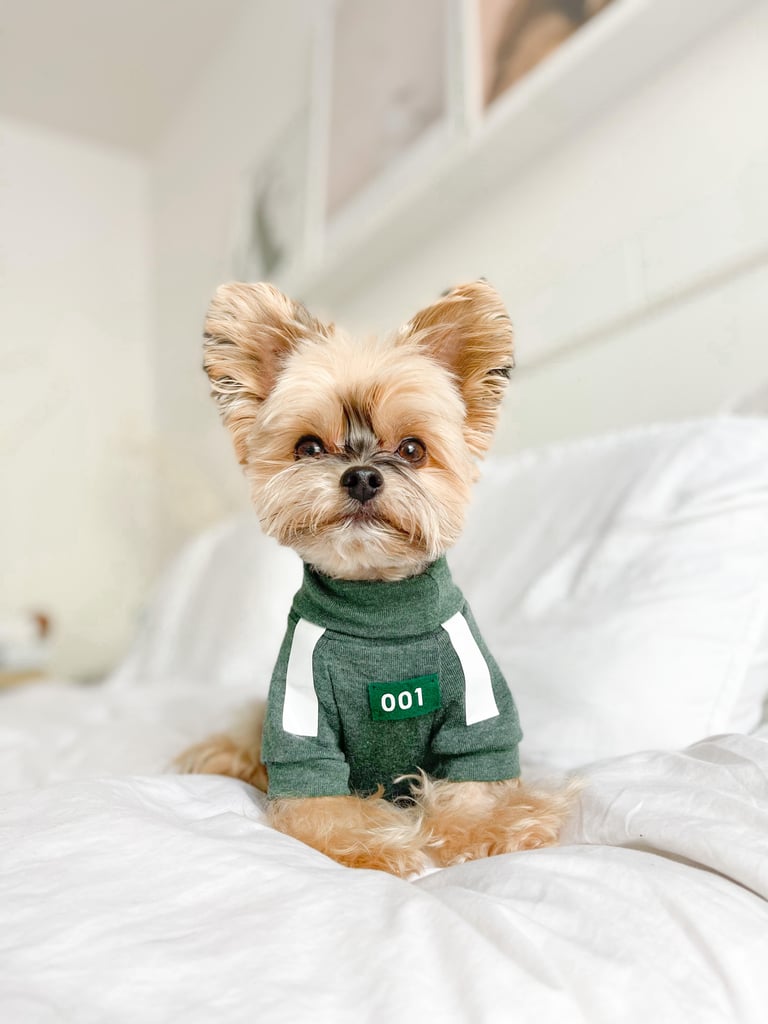 If your pet faithfully endured the violence and horror of Squid Game for the eight hours you refused to get off the couch, then it might be time to consider giving your pup (or patient cat) a VIP-level Halloween upgrade. Ahead of the spookiest day of the year, TikTok user Ducky the Yorkie decided to dress up as one of the Squid Game guards with the help of his human, Christine Hsu. "My sister suggested I dress him up as a guard and even helped me figure out what I should use as the mask (which was the hardest part to figure out)!" Christine told POPSUGAR via email.

To create her dog's mask, Christine used non-toxic spray paint to paint a kitchen strainer black and drew on a square to show where Ducky stands in the game's hierarchy — he's a manager, of course. Christine completed the look with a bright-pink puffer jacket and a clear piggy bank stuffed with money to represent the pig in the show. "The mask was definitely the most difficult part," Christine said. "I had no clue how I was going to create it and started off thinking I could find a kid or doll fencing mask, but ultimately ended up with the strainer idea, which worked out perfectly."

"I'm happy it resonated with so many people."

Decked out in his full costume, Ducky patiently posed for a video to share with his 2.2 million adoring fans. The video has since received nearly 22 million views and inspired a follow-up costume: a player! After waiting for the materials to arrive and the paint to dry, each outfit took a couple of days to create, and the wait was definitely worth it.

"I'm happy it resonated with so many people," Christine said. "Thank you to all the new ducklings that followed after watching the video and I can't wait to make more videos for you guys :)." If you're curious, Christine's favorite characters include Sae-byeok (player 067) and Il-nam (player 001) before the later episodes, while Ducky's would probably be detective Hwang.

Out of all the personality quizzes, chaos, and deep fan theories that have come out of Squid Game so far, these costumes are by far the cutest I've seen. See Christine's step-by-step tutorial to re-create Ducky's guard and player costumes at home, and find out how to snag your own human Squid Game costume here ahead of Halloween.