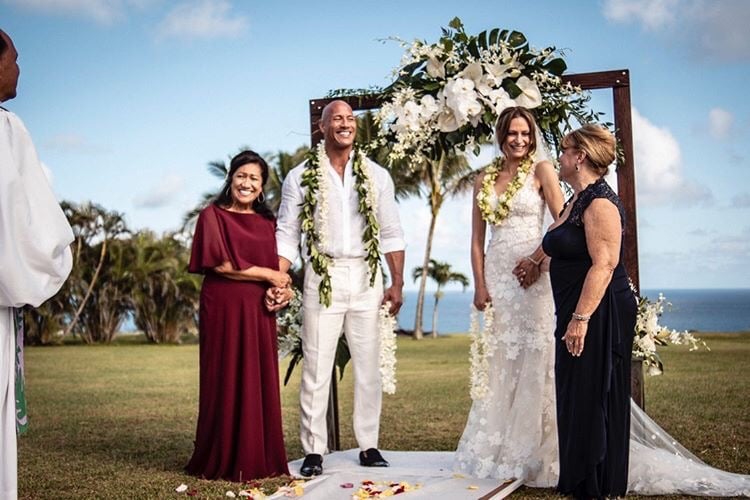 Since tying the knot on Aug. 18, newlyweds Dwayne Johnson and Lauren Hashian have been sharing gorgeous snapshots from their ceremony on Instagram. The 47-year-old actor and 34-year-old singer said their vows in Hawaii — where they also took their honeymoon — in front of friends and family, including their daughters, 3-year-old Jasmine and 1-year-old Tiana. While Lauren stunned in a lace Mira Zwillinger gown, Dwayne looked sharp in a white button-up and tailored pants.

On Aug. 31, Dwayne posted even more photos from the wedding reception, where he swapped threads, sporting a Hawaiian shirt and white bottoms. "We love you family. On our wedding day, thank you for giving us your full hearts, love and support," he captioned a gallery. "Meant the world to us. Our ohana who sang beautiful songs and danced gorgeous hulas for us, also known in the streets as droppin' it like its hot." Other pictures — captured by photographer Dustin Shepard — show the two lovebirds embracing, gazing into each other's eyes, and posing alongside their mothers, Ata and Suzanne.

Dwayne and Lauren first met in 2006 while the former wrestler was filming The Game Plan. They began dating the following year and welcomed Jasmine and Tiana in 2015 and 2018, respectively. Dwayne also shares daughter Simone with ex-wife Dany Garcia. By the looks of it, Dwayne and Lauren are ready to embrace their new lives as husband and wife. Look ahead to see some of the most beautiful pictures from their wedding!

Celebrity Instagrams
Excuse Me For Staring, but Is That a New Tattoo on Megan Fox's Rib Cage in Her New Skims Ad?
by Chanel Vargas 9 hours ago