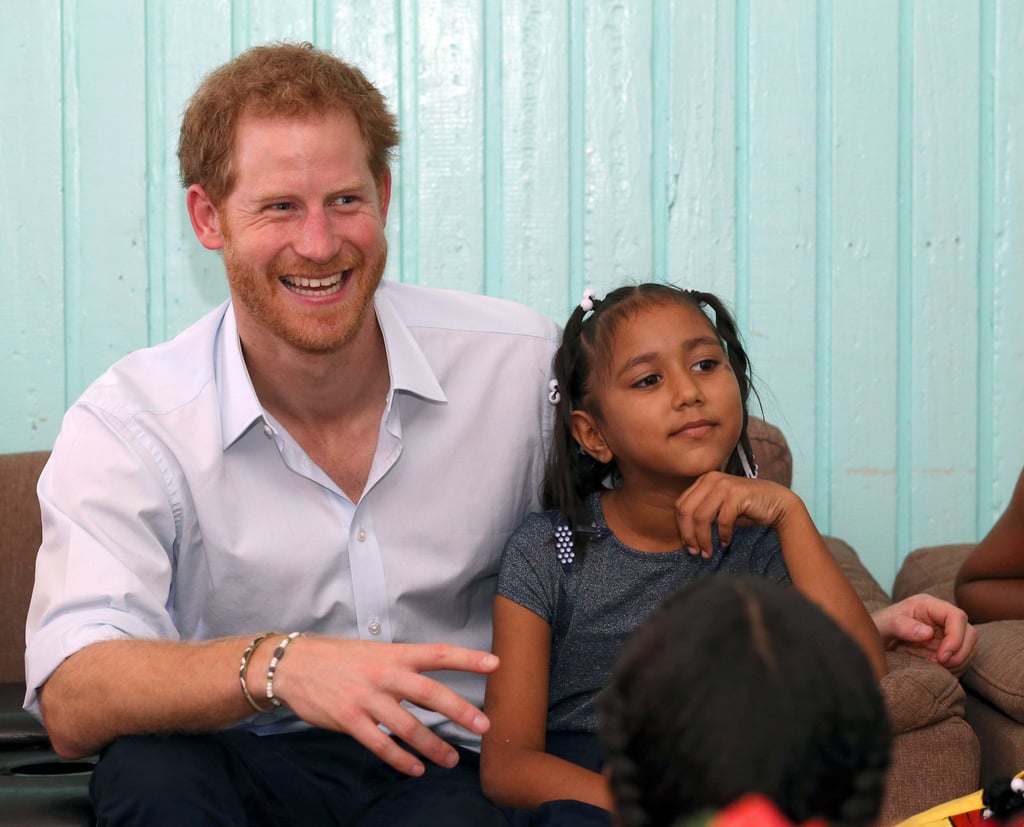 Prince Harry officially kicked off his Caribbean tour when he touched down at the V.C. Bird International Airport in Antigua on Nov. 20. Upon his arrival, Harry was welcomed by Governor General Sir Rodney Williams and a large banner that read, "Antigua & Barbuda Welcomes Prince Henry of Wales." The following day, the young royal let his hair down with a group of kids at a youth sports festival at Sir Vivian Richards Stadium. On Monday night, he met with Miss Antigua and island beauty queens at a reception hosted by Gaston Browne, Prime Minister of Antigua and Barbuda, before paying a visit to Holy Trinity Primary School and Nursery on Tuesday. He also got his hands dirty when he gutted a fish at Sir McChesney George High School. On Wednesday, Harry arrived in St. Kitts and Nevis, where he chatted with school children, was greeted by cultural dancers at Brimstone Fortress during a youth rally, planted a tree, and released baby turtles into the sea. On Friday, he looked especially gorgeous while playing a rousing game of cricket at a stadium in Castries, Saint Lucia. He then mingled with the public and drank from a coconut.

After his stop in Saint Lucia, Harry visited the Botanic Gardens in Kingstown on Saturday and also dropped by the Turtle Conservation Project in Colonarie, where he appeared to have an absolute blast as he played with children. Two days later, the handsome royal showed off his competitive side when he got really into a game of cricket at Queen's Park Ground in St. George's, Grenada. On Nov. 29, Harry paid a special visit to the Nightingale Children's Home in Barbados and was as cute as can be as he met with a handful of kids. The following day, Harry attended the Toast to the Nation event to commemorate the island's 50 years of independence, where he finally got to meet legendary pop princess Rihanna. The two then linked up again for the Man Aware campaign, where they each got a blood test in honor of World Aids Day. On the 13th day of his visit, Harry visited Guyana, where he was presented with a traditional headdress by a couple of dancers in Sumara Village. The royal concluded his tour on Sunday by meeting with kids at the Joshua House Children's Centre in Guyana.

Harry visited a total of seven different countries throughout his 14-day trip and attended several independence anniversary ceremonies. He spent some of his time focusing on the environment by learning about turtle conservation projects, replanting coral reefs, and spent six nights on a Royal Fleet Auxiliary Wave Knight vessel that is used for disaster relief.

Related:
Everything There Is to Know About Prince Harry and Meghan Markle's Royal Relationship
Previous Next Start Slideshow
The RoyalsPrince Harry