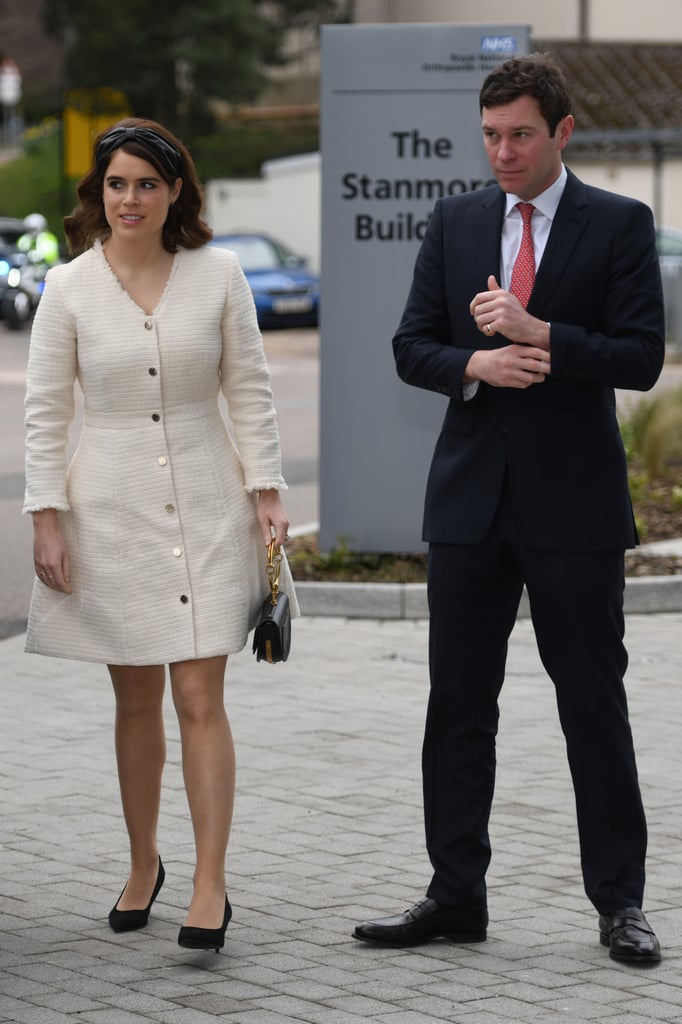 Princess Eugenie and Jack Brooksbank joined Prince Andrew for a special visit to London's Royal National Orthopaedic Hospital on March 21. The trip marks Eugenie and Jack's first official outing as a married couple since their gorgeous October wedding. During the visit, the 28-year-old princess rocked a pretty cream-colored dress and black headband, and the 31-year-old wine merchant sported a full suit and tie as they spoke with some of the patients and even met one of the hospital's robots named Pepper.

The facility is also the same place where Eugenie had surgery to correct her scoliosis at the age of 12. During the eight-hour operation, surgeons placed eight-inch titanium rods into each side of Eugenie's spine, as well as one-and-a-half-inch screws at the top of her neck. After the surgery, she spent three days in intensive care, followed by a week at a ward and six days in a wheelchair before walking again.

Eugenie is now a patron of the hospital, just like her father. They've both shown support for the health center's redevelopment appeal that will replace some of the old buildings with a new inpatient ward block. The goal is to provide a better, more comfortable experience for patients — something that's surely near and dear to Eugenie's heart.

Related:
Proof That Princess Eugenie Is the Most Underrated Member of the Royal Family
Previous Next Start Slideshow
The RoyalsCelebrity CouplesPrince AndrewPrincess EugenieJack BrooksbankThe British Royals

Maluma
Who Is Maluma Dating? What to Know About the Marry Me Star's Girlfriend
by Alicia Geigel 12 hours ago