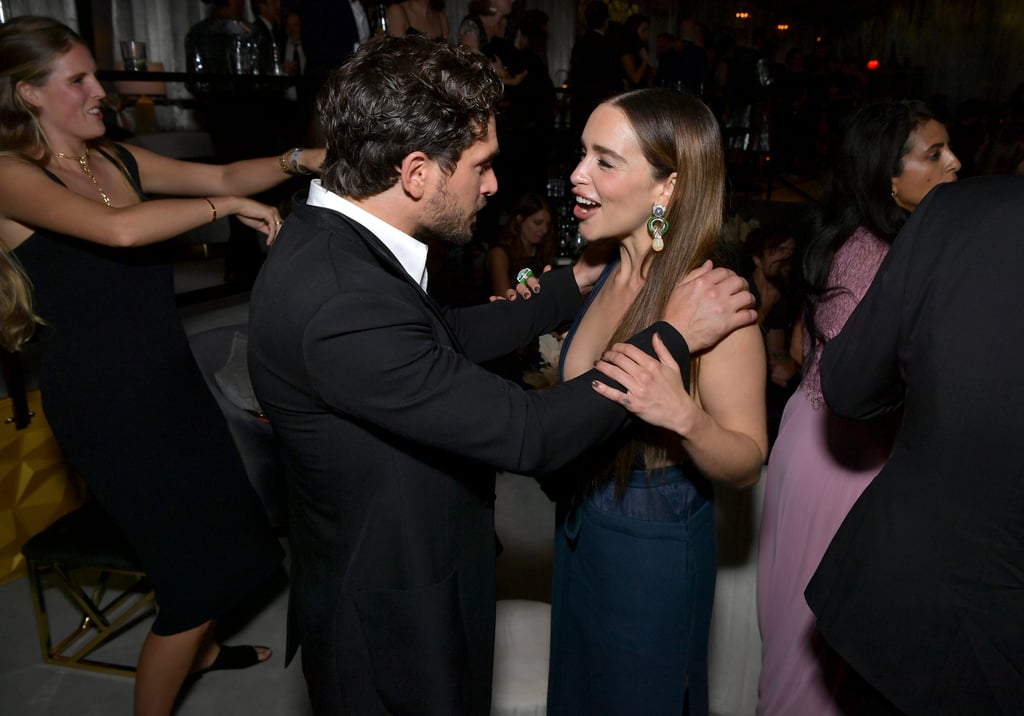 Kit Harington, you have some explaining to do! The Game of Thrones actor and his onscreen aunt-turned-lover-turned-enemy, Emilia Clarke, have always had a close friendship in real life, but following the shocking series finale of GOT earlier this year, Kit and Emilia's latest reunion at the Emmys has fans taking a sigh of relief that all is right in the fictional world of Westeros.

At the 2019 Netflix Primetime Emmys afterparty, Emilia and Kit were photographed hugging it out, and it has us imagining the hilarious conversation that possibly went down. Even though Kit confessed to still having not seen the final season, we're hoping their conversation sounded something like this . . . "So, uh, sorry for killing you." "It's OK, I deserved it." "You're right. Truce?" "Bring it in, nephew!"

The entire cast of Game of Thrones reunited at the Emmys where they posed for photos on the red carpet and presented an award during the show. The show had a record-breaking 32 nominations in six different categories. They took home the award for outstanding drama series, and Peter Dinklage won outstanding supporting actor in a drama series for the HBO show. Check out photos of Kit and Emilia at the afterparty and more of the Game of Thrones cast at the Emmys ahead.

Related:
Not Even the Night King Could Stop the Game of Thrones Cast From Dominating the Emmys
Previous Next Start Slideshow
Game Of ThronesKit HaringtonEmilia ClarkeEmmy AwardsAward SeasonCelebrity Friendships

Teyana Taylor
Is It Just Me, or Is Teyana Taylor's Billboard Hairstyle a Nod to TLC's "No Scrubs"?
by Ariel Baker 6 days ago

by Kelsey Garcia 43 minutes ago