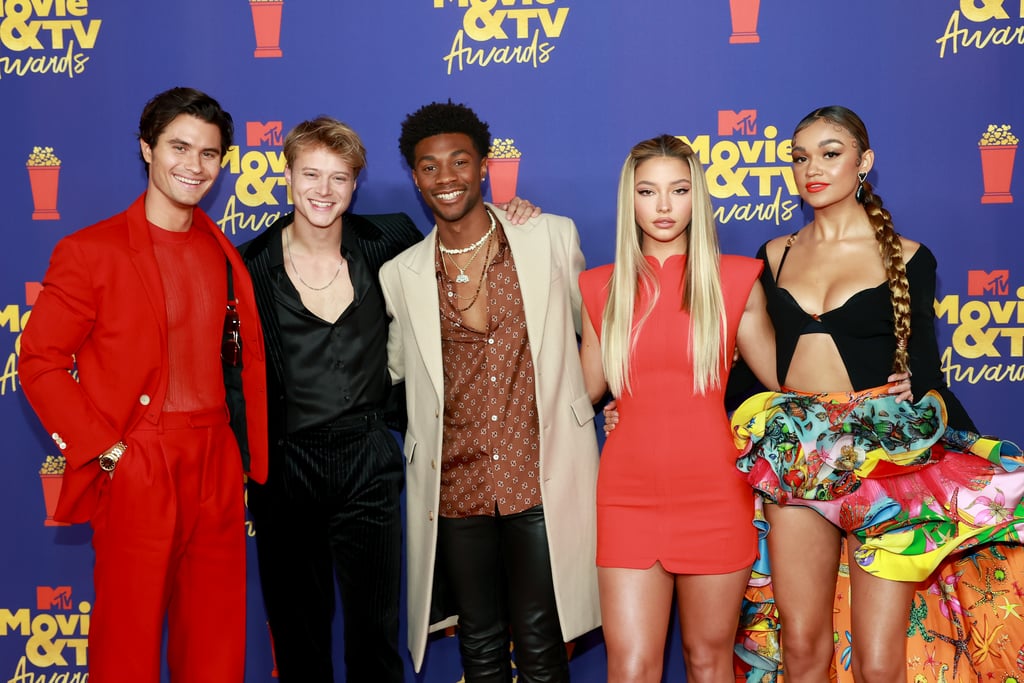 The Pogues did not come to play when they showed up to the MTV Movie and TV Awards in LA on Sunday. Dressed in colorful coordinating ensembles, the Outer Banks cast — Chase Stokes, Rudy Pankow, Madison Bailey, Madelyn Cline, and Jonathan Daviss — looked good as hell as they reunited on the red carpet ahead of the ceremony. The group, who recently wrapped filming season two of the Netflix series, presented at the show, while real-life couple Madelyn and Chase took home the golden popcorn for best kiss.

The cast's exciting reunion comes just days after Netflix announced Outer Banks will be returning for season two this summer. "Season 2 is going to test our crew like never before. We've turned up the dial on everything fans loved about season one — more mystery, more romance and higher stakes. It's a full throttle, action-packed adventure and these photos offer a glimpse into the next chapter for our Pogues," the show's creators and executive producers, Jonas Pate, Josh Pate, and Shannon Burke, said in a statement. "All we can say for now is buckle up, it's going to be a wild ride." Ahead, see more of the cast's night out at the MTV Movie and TV Awards.

TV
Ayo Edebiri Shuts Down Carmy-Sydney Ship on "The Bear": "I Don't Think So"
by Eden Arielle Gordon 22 minutes ago

STARZ
"P-Valley"'s Katori Hall on the Spectacle of Season 2: "Everybody Can Clock That the Show Is Good"
by Njera Perkins 21 hours ago