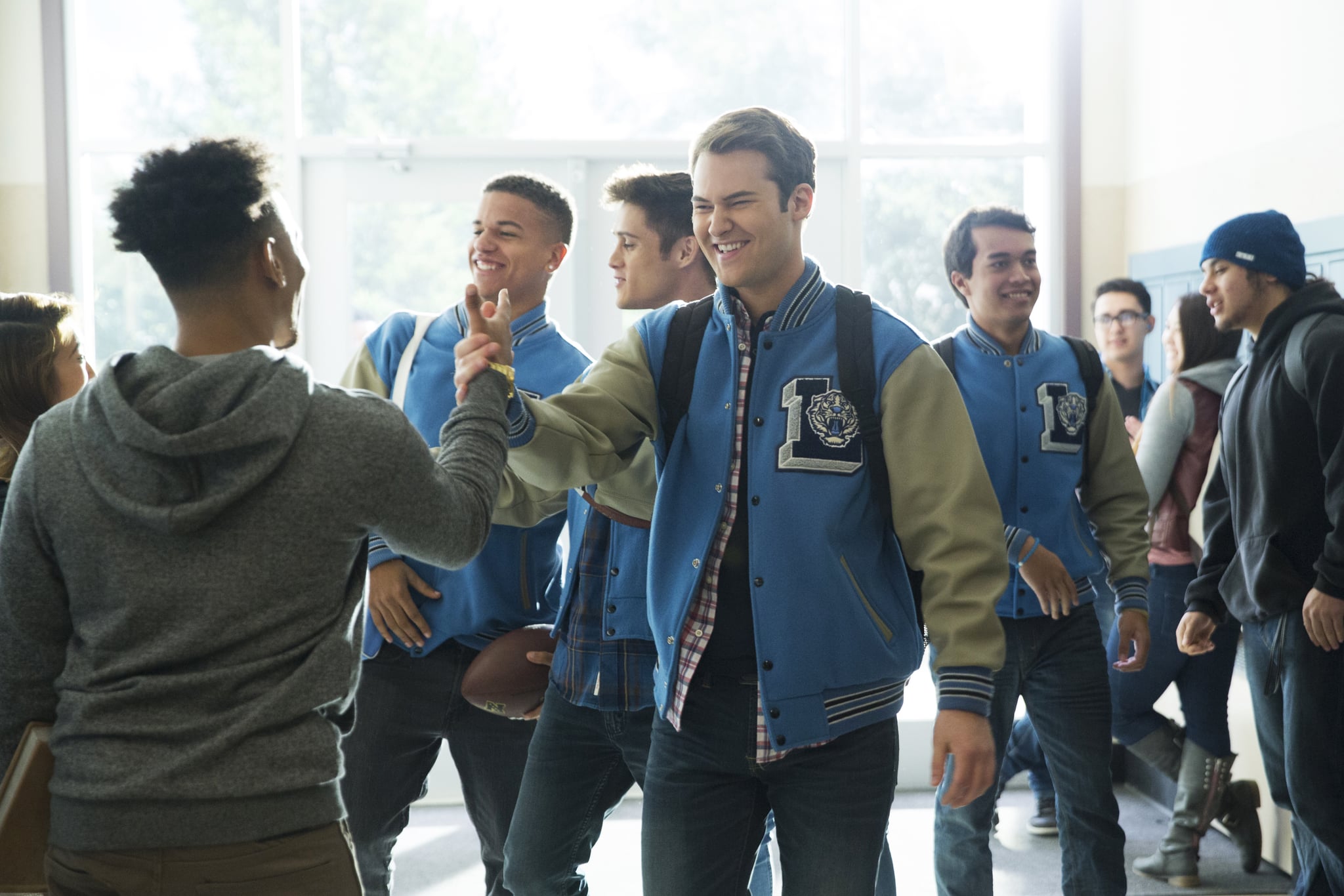 If you were one of the thousands of people who've binged Netflix's 13 Reasons Why over the last few days, there's a good chance you hate Justin Prentice. OK, OK, hopefully not Prentice himself, but Bryce Walker, the despicable jock who ends up being one of the main reasons why the drama's heroine, Hannah Baker, decides to kill herself. Prentice, obviously, is vastly different than his character, even though fans are having a little bit of trouble differentiating the two. "They're all fantastic, for the most part," he joked during my recent phone call with him. "There are a few comments that come in, which is to be expected with the character I'm playing, of course. It's really cool because most of my followers then come to my aid, and have my back. They're very passionate, I'll give them that."

The show has become wildly popular, sparking an insane amount of social-media traffic in the week after its release, mostly thanks to its primary audience: internet-savvy high school students. Though stepping into the basketball sneakers of a guy like Bryce can't have been easy, Prentice saw it as an opportunity to raise awareness for that audience in particular; by seeing someone like him onscreen, there's a chance that a few young lives out there might be changed for the better. Over the course of our call, Prentice filled me in on everything from dealing with bullies himself as a kid, to what might go down if Netflix decides to move ahead with season two.

POPSUGAR: Bryce is such a brutal character. What was your initial reaction to reading the script, and how did you go about preparing for the role?

Justin Prentice: Well when I first got the script, I didn't know the full extent of what he did. I know that the verbiage "Frat Boy Darth Vader" was in there, which also made it into the show. I think it said sexual assault, or something like that. I didn't know it was going to be full-on rape until the call-back. For the call-back, one of the audition scenes was kind of a mock write-up of the scene in episode 12 with Clay, when he comes to my house to confront me. I knew at that point exactly what my character did and what he was capable of. Initially I just did my normal work to prep the character, I guess, but then I added more research on top once I knew the extent of it.

PS: In that scene with Clay that you mention, it almost seems as though Bryce really doesn't think he's done anything wrong. Do you think he truly sees the situation that way, or is just putting up a front?

JP: I think with Bryce, a lot of it's his environmental circumstances. I think he's learned a lot from his father, in terms of treating women. Bryce sees women as sexual objects that he can use for his own pleasure. He devalues them, especially compared to himself, which allows him in his mind to justify the actions that he's doing.

PS: What do you hope people who watch the show will really take away from seeing a character like this?

JP: I love the way that they shot all of it, but especially the scene with Hannah Baker in the hot tub. We rehearsed a lot with the directors, producers, writers, and everything, and they worked through the camera blocking so we'd know what to do ahead of time. One of the things I thought was really cool was them focusing on her face, to really convey just how broken she's becoming in that moment. You're just watching her soul shatter. Hopefully people who are jocks themselves and whatnot, will see this and realize that their actions do have consequences. This is a human being that you're affecting permanently. I hope they start conversations with their friends and if they see something going on, hopefully they'll intervene. Alexis Jones is a big advocate on "locker room talk," and has the I Am That Girl campaign, which goes to locker rooms throughout the country in colleges and high schools. She raises awareness for sexual assault, and talks to all of these jocks and athletes. We hope it kind of piggybacks off of that, in terms of a 'Don't let your bros do this,' sort of thing. These are horrible acts, and they're decimating a human life.

PS: Going off of that, after the show premiered, a lot of people were tweeting about how it should be mandatory viewing for high school students. Do you agree?

JP: Yeah, 100 percent. We've even gotten requests from Christian schools, because some of the teachers are advocates for getting this out to the students, despite the occasional foul language or whatever. I absolutely think it should be shown, because it's very relevant. These issues are happening, and part of the reason they're happening is because there's a lack of education on the subject matter. People aren't talking about it, or feel like they even can talk about it, so oftentimes it gets swept under the rug, or people will put a smile on their face to just get through the day. We really hope that people start to open up, and reach out to someone who's struggling. 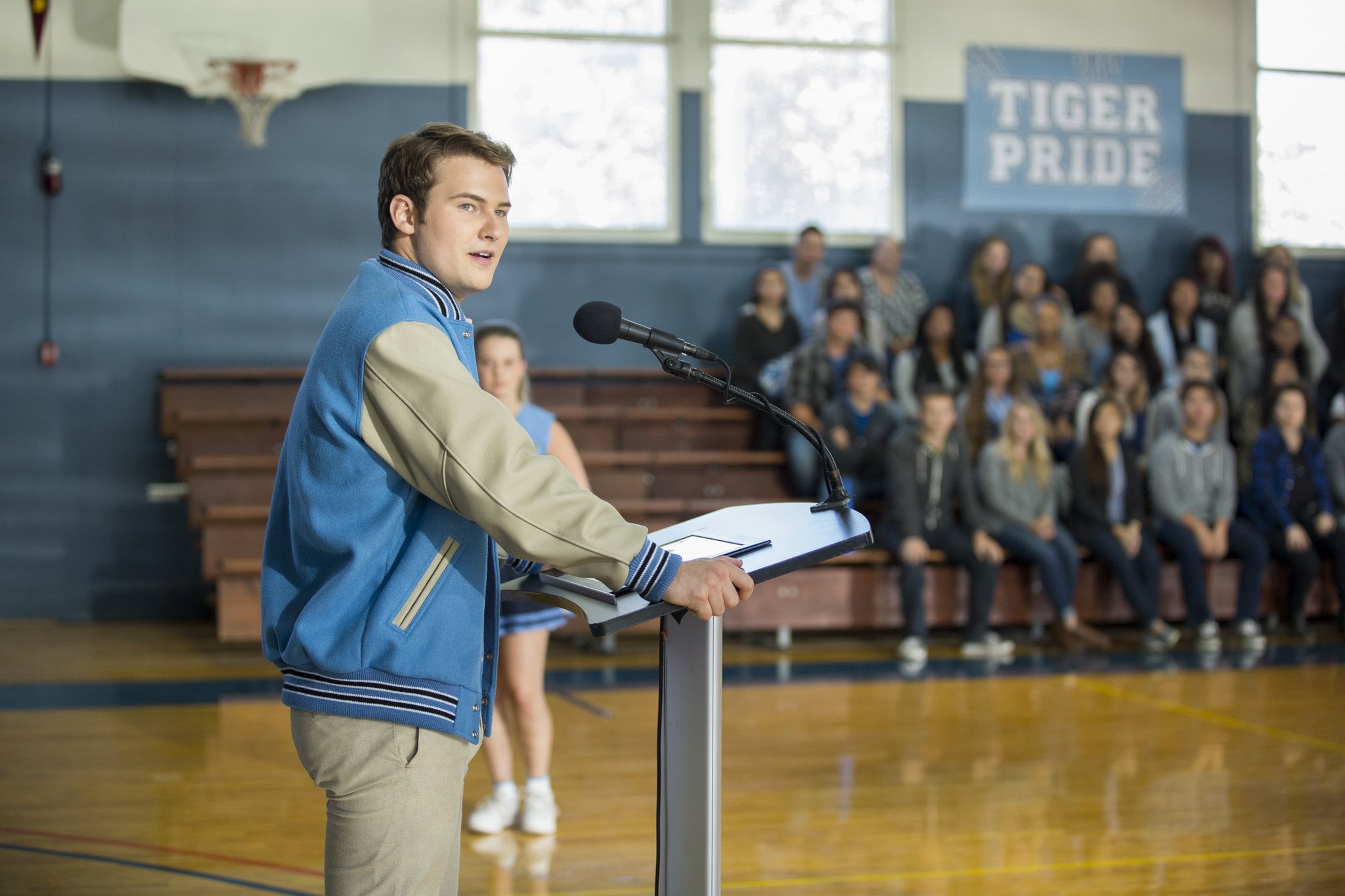 Related:
16 Things You Didn't Know About 13 Reasons Why

PS: Was any part of the high school in the show at all like your own experience growing up?

JP: Well, I was actually home-schooled because I was already acting. [laughs]

JP: I wanted to blow through it all and graduate early so I could focus on my career, so yeah it was really different from this. That experience comes with its own adversities though, I suppose, being in the industry at such a young age. Although through sports teams and stuff growing up, there was bullying. It was the South, I'm from Tennessee, and my parents were like, "Just tell them you're gonna knock their teeth in if they keep on doing it." So that's what I said, and they stopped doing it, and the problem was solved. That doesn't always happen, obviously, because bullying has changed a lot. That was before social media. Nowadays, with the cyberbullying, once something gets posted it's an immediate wildfire. It's instantly put out to the masses, so we hope there's some preventative measure in this as well. Once you click that button you can really do some damage to a person.

PS: You were on Glee, too, which also takes place in a high school, so is it fun for you to film scenes like school dances, or be walking around with a letterman jacket since you didn't get to have the traditional high school experience?

JP: Yeah! Over time I'm slowly living out all of my high school experiences on camera. It's really fun. The shooting locations were also fantastic. We were just north of San Francisco, and my character's house is gorgeous. All of that, along with the high school element, made for a pretty enjoyable shoot.

PS: There have been rumblings of a potential second season, so if it were to happen, hypothetically, where do you see Bryce's story going?

JP: I would love to meet his parents. I feel like it's probably one of those, "the apple doesn't fall far from the tree" scenarios. He's probably very similar to his father, which could be very interesting. They're also a power family, so I'm sure that they'd have powerful, hyper-intelligent attorneys on their side as well, which could lead into a battle down the road. Yeah, that would be really interesting.

PS: In one of the final scenes, we find out that Alex shot himself in the head. There's a crazy theory going around, though, that Tyler actually shot him in a revenge situation. Any thoughts?

JP: I think I heard about this theory! I have no idea. I can't confirm or deny one way or the other, because I don't know if there is a season two, or what the writers would even come up with, so . . . I guess anything is possible? [laughs] But it might be a little far-fetched.

Annie Murphy
No Longer a Little Bit Alexis: Annie Murphy's Kevin Can F*ck Himself Character Is Wild
by Grayson Gilcrease 2 hours ago