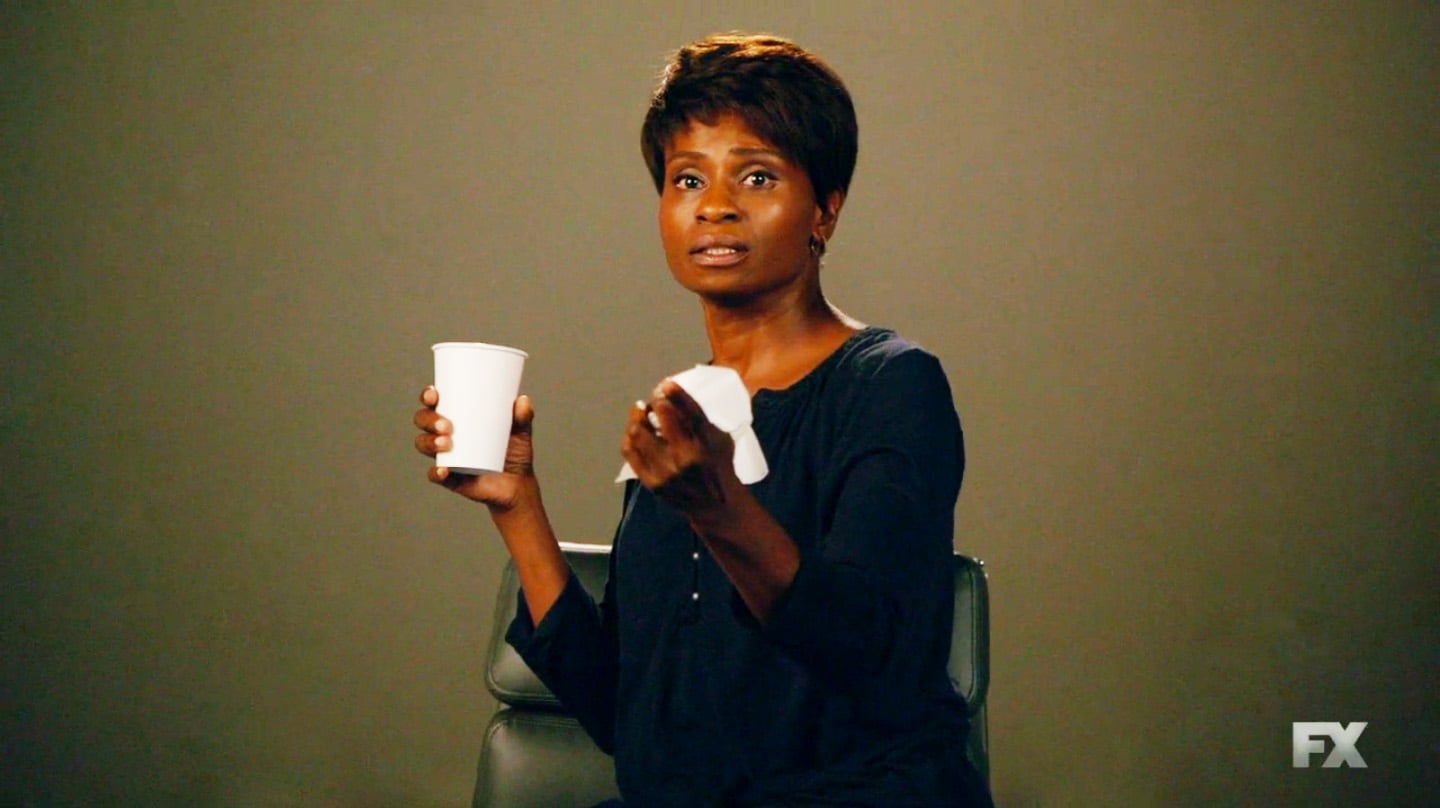 After using all of our brain muscles to figure out what American Horror Story was about while the show was airing, we're already obsessing about the upcoming seventh season. Roanoke's finale featured a couple of Easter eggs, and there may have even been a hint about the next season, but let's go back to "Chapter Three," the third episode, for a minute. It's the first time we see the production behind the show-within-the-show we now know as My Roanoke Nightmare. Sidney is asking Lee about an incident that had occurred at the house. Lee and Matt had asked Cricket to leave, and Cricket whispers something to Lee on his way out. Whatever it is, it upsets her. Here's the dialogue from Lee's interview with Sidney:

Sidney: "Your sister-in-law thought it was something Cricket Marlowe whispered to you, before he left?"

Sidney: "You sure? Because you went to see him the next day. Was that because Cricket Marlowe said something about your first daughter? About Emily?"

Lee looks spooked, and the show cuts to the reenactment. Fake Cricket leans in and whispers to fake Lee: "Emily says hello, she wonders why you quit looking for her all those years ago." Fake Lee is visibly shaken, and the show converts back to the interview with Sidney and Real Lee.

Lee: "How do you know about Emily?"

Sidney: "All participants on the show are subjected to extensive background checks. Death certificates are a matter of public record. Tell us about Emily."

Lee is upset and insists that they turn the cameras off. When they eventually come back on, she agrees to talk about her first daughter.

Lee: "I was young, 17 when I had Emily. She had just turned 4. It was around the Fourth of July. I was running errands, and I just had to run to the grocery stop and grab some sauce real fast. Five minutes. I don't know why I didn't take her in with me. When I came back to the car, she was gone. I never saw her again."

Of course, this is a tragic story, but why bring it up? At the time, we figured Emily may factor into the rest of the season somehow . . . then she didn't. The writers could have put it in to explain Lee's extreme desire to keep Flora safe, but doesn't every mother feel that fierce protection for their child? It seems unnecessary — unless there's another motivation.

Given that the various American Horror Story seasons are all connected (and are really just small parts of Ryan Murphy's extensive, twisted imagination), Emily could be a future character. Now that we know she's not a part of Roanoke, it would make sense that this is a breadcrumb leading us to season seven, or even eight. Then again, we're still looking for the Thatcher School to appear.