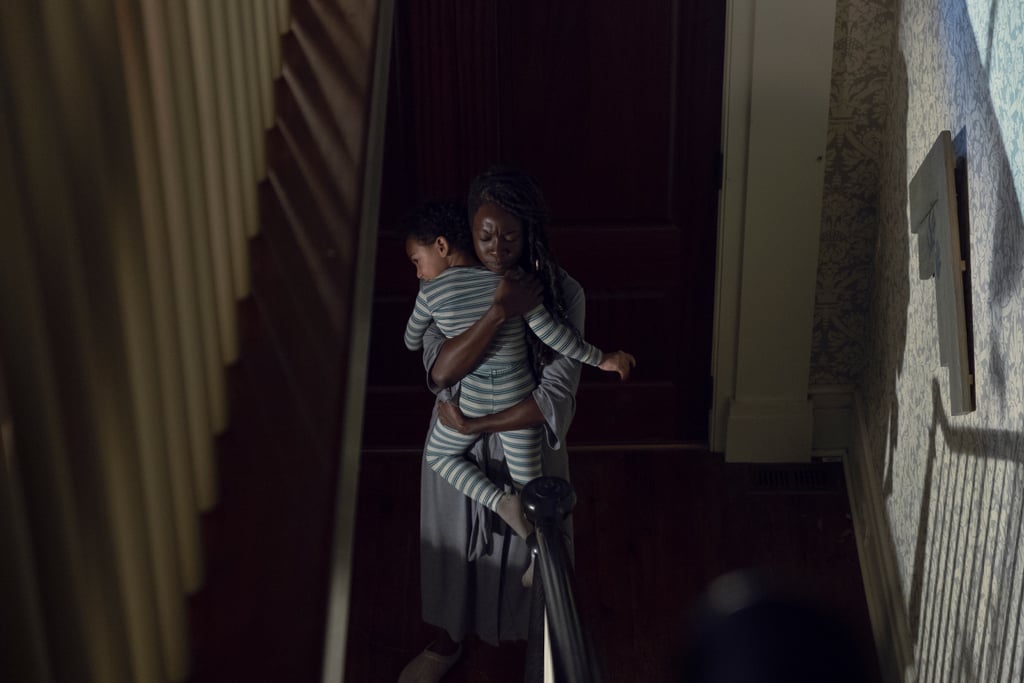 Warning! Spoilers for the latest episode of The Walking Dead ahead.

We finally see how The Walking Dead's universe moves on after the "death" of Rick Grimes, and it's a lot to take in. There are new faces along with the old and dangers still lurking around every corner. But perhaps the most heartwarming surprise is the reveal that Rick's wish to grow his little family with Michonne has come true — the two now share a 5-year-old son named Rick Jr. (also known as RJ).

RJ's existence is revealed near the end of the episode, after we get a look at the drastic changes the communities have gone through during the past six years. We witness Michonne in her new role as the leader of Alexandria's security and how she's understandably wary of the new survivors that Judith brings to the community. After discussing the newcomers with the rest of the council during the community-wide meeting, Michonne retreats to her home for the night, where her thoughts are interrupted by a little boy who runs to her, calling her "Mommy." Cue Richonne fans instantly combusting.

There is a lot to unpack surrounding Michonne and what she's been up to these last few years — especially after seeing that huge X-shaped scar on her back — but the discovery that she and Rick were actually able to make good on their desire to become parents is too sweet to ignore. According to showrunner Angela Kang, the idea that the two would have a child was "a sign of hopefulness."

"We wanted to show that Rick and Michonne were committed to each other, fully," Kang told The Hollywood Reporter. "It seemed like a sign of their commitment, and their optimism for the future. They believed they could bring a new child into this world and they could make the world better for that child."

The attitude is a noticeable difference from how Lori and Rick reacted when they discovered she was pregnant with Judith. But that makes complete sense since the survivors were nowhere near as established as they are now in Alexandria. "Michonne and Rick lived in a very different time, and we wanted to show that," Kang explained. "It was a fun process for us, imagining what a world with more children would look like, but also the tragedy that Rick never got to meet this child they were so excited about."

That juxtaposition is definitely obvious in "Who Are You Now?" The episode highlights how Michonne is still living with her grief while raising her children and keeping them safe. Much like Rick did after Lori's death, Michonne finds herself talking to his ghost even though she knows he won't respond. Judith seems used to hearing her mother talk to ghosts but is relatively well-adjusted considering the circumstances. When RJ interrupts his mother, she is very obviously happy to see him, but his father never leaves her thoughts — which is alluded to by the small toy sheriff she keeps that looks just like Rick.

Kang has teased that we'll be getting flashbacks of what transpired during the six-year jump, so hopefully that means we'll be able to see more of Michonne's journey as a mother of two. Until then, take a trip down memory lane and keep scrolling to see photos of the Grimes family when they began anew, way back in season three.

TV
Cruel Summer: How That Twist Ending With Jeanette Could Set Up Season 2
by Kelsie Gibson 9 hours ago

Netflix
If You Think Kreese Is Evil on Cobra Kai, Wait Until You Meet Terry Silver
by Sydni Ellis 14 hours ago

Sarah Jessica Parker
Grab Your Cosmos! Here's Everything We Know About the Sex and the City Revival
by Monica Sisavat 15 hours ago