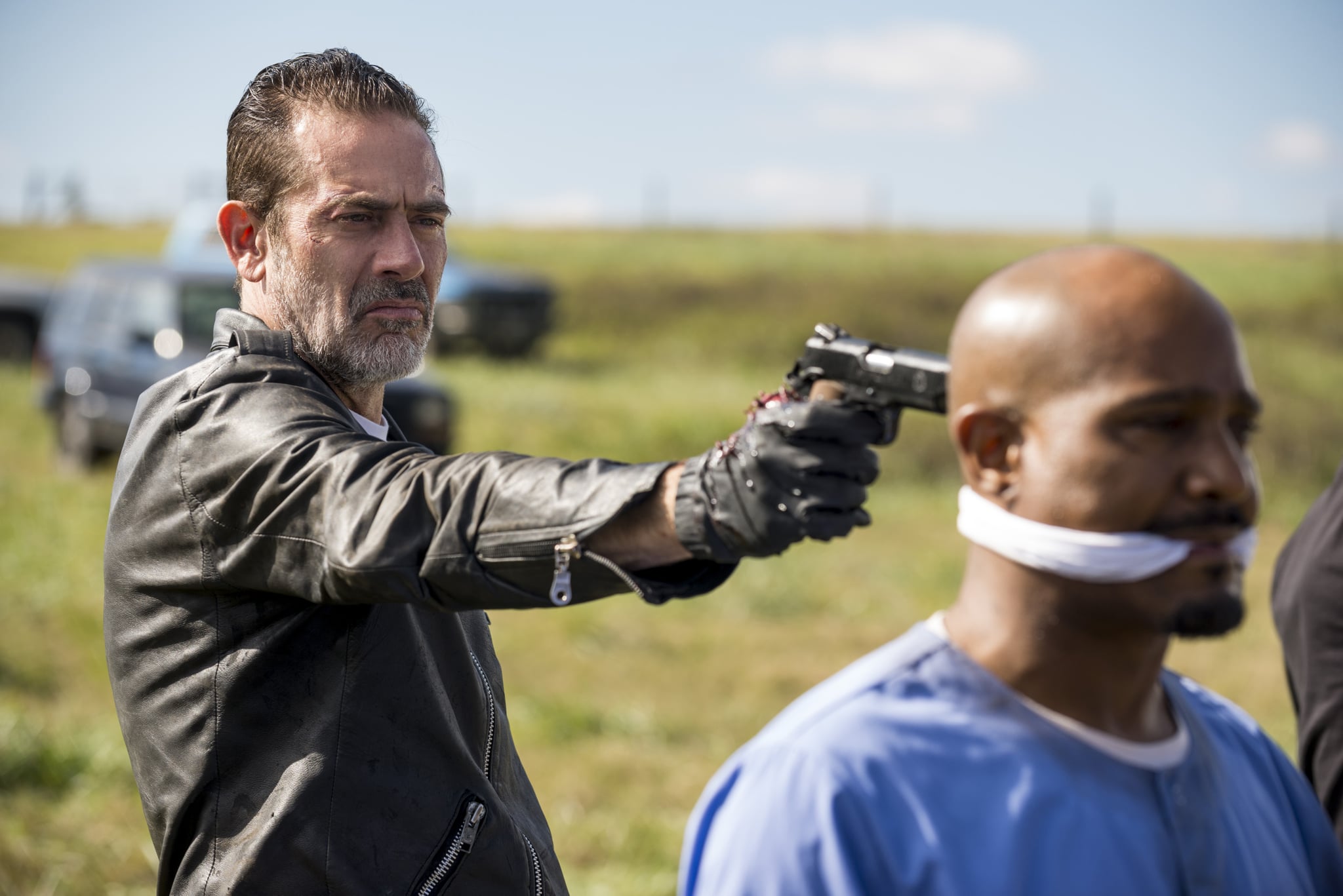 Spoilers for The Walking Dead below!

Is it just us, or did The Walking Dead's eighth season feel like it lasted an eternity? Sunday night finally marked the end of the AMC zombie drama's lengthy "All Out War" storyline, resulting in a tense and blood-soaked season finale. Although there's certainly some gore throughout "Wrath," the series decided to buck tradition and leave all the major characters alive as we head into season nine.

Toward the end of the finale, the leather-jacket- and monologue-loving villain played by Jeffrey Dean Morgan has his showdown with Rick (Andrew Lincoln), and some fans were a little shocked at how their interaction ends. Despite Rick's repeated vows to murder the Savior leader as revenge for what he did to Glenn and Abraham in the season seven premiere, Negan's life is spared (though he doesn't make it out of the situation unscathed).

All of this boils down to the contents of the sentimental letter Carl writes to Rick before he dies. Carl's pleas for his father to build "a real life" and "find peace with Negan" have a serious impact on Rick, and ultimately he decides that killing Negan will only perpetuate the cycle of violence that everyone in this world has become accustomed to.

Related:
Twitter Is Having a Meltdown About Rick's Shocking Decision in The Walking Dead Finale

The pair winds up face to face after Negan is forced to run for cover after his gun backfires and injures his hand (thanks to Eugene's faulty ammo), so he ends up ducking behind a tree that happens to have the same stained-glass panels hanging from its branches that we see Rick appearing to bleed out under in the midseason finale. Rick, also without a gun, ends up taking on Negan with good old-fashioned fisticuffs and soon finds himself at Negan's mercy. That is, until the villain starts spouting off one of his long-winded diatribes.

This gives Rick a chance to try to convince Negan that together they can change the world, something that Carl would've wanted. They lock eyes, and it seems that for a moment Negan is truly moved by Rick's words. And then, of course, Rick whips out a knife and slashes Negan across the throat. 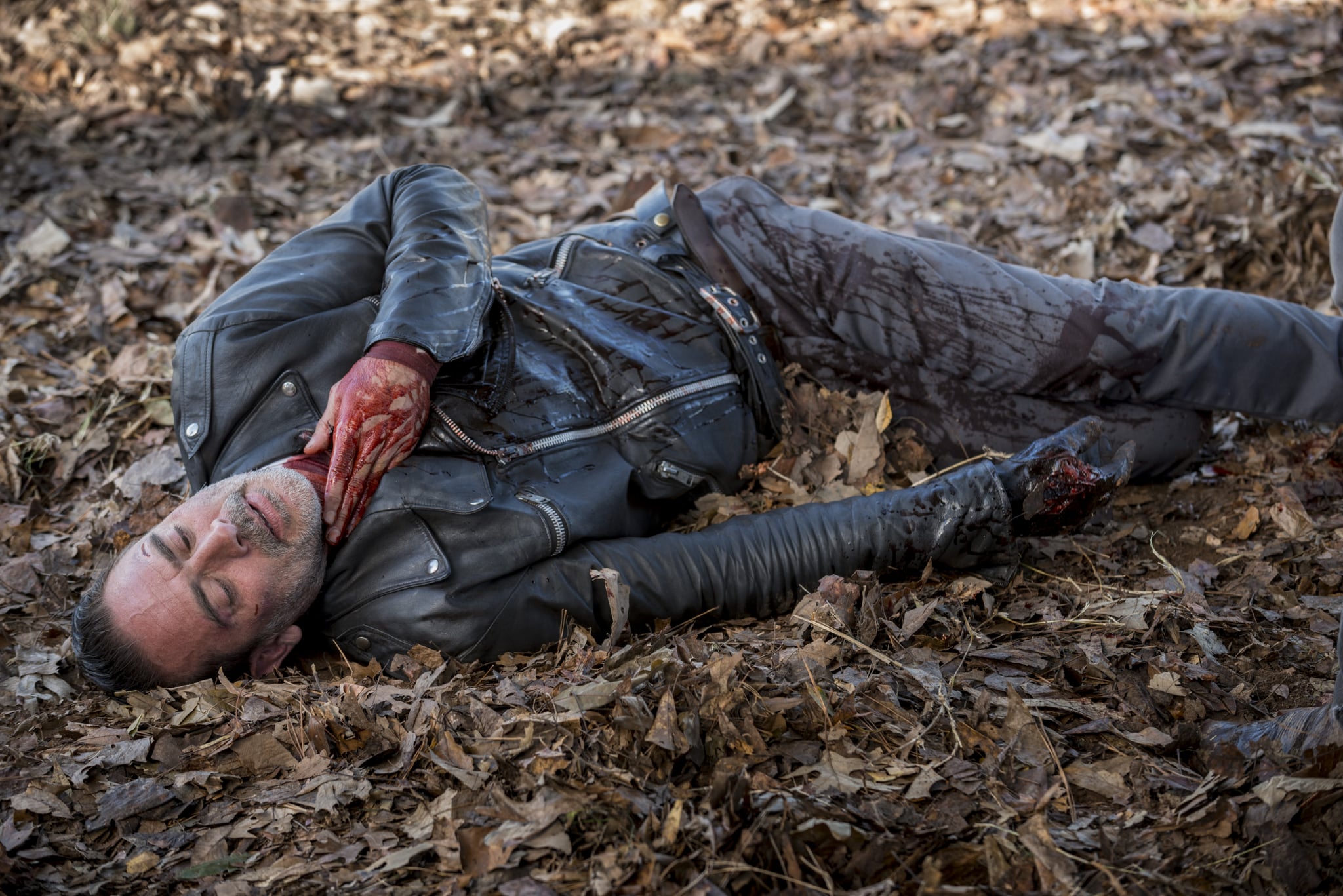 Does he die, though? Nah. Just barely clinging to life, Negan still finds time to criticize Rick. "Look at what you did," he chokes out. "Carl didn't know a damn thing." Unfortunately for Team Alexandria, Rick orders Siddiq to "save him," and we later see Negan stitched up at Hilltop. So, why does Rick choose to let Negan live in those final moments? Carl's letter, sure, and also it sets up a potentially devastating season nine storyline.

As anyone who's read the comics is aware, Negan survives in a similar way, and spends the rest of his life locked up in the basement in an unknown house. Rick's decision on the show, however, doesn't sit well with Maggie, who has a hysterical breakdown after Rick tells her it had to be done to ensure the future of a "new world." How could he let the murderer of her husband, Glenn, live?

This results in a splintering of the heroes we've spent most of The Walking Dead with: Rick and Michonne on one side, while Maggie recruits Daryl and Jesus to her own cause. As ominous music plays in the background, she meets with them and vows that they'll "bide their time," and show Rick just how big of a mistake he's made.

Now, we don't necessarily buy that Maggie is going to become a villain next season. But we do anticipate a civil war of sorts happening within the main group. It's also worth noting that there are rumors that Lauren Cohan, who plays Maggie, is leaving the series to star in her own pilot. Having had it with Rick's leadership, Maggie might decide to pull a Morgan and leave the group altogether. We can't imagine she'll want to live her life at Hilltop knowing that the man who beat her husband to a pulp is within spitting distance.

Netflix
Will There Be an "Extraordinary Attorney Woo" Season 2? Here's the Deal
by Pallavi Bhadu 12 hours ago

Tatiana Maslany
Tatiana Maslany on Portraying a Female Hulk: "Our Culture Is So Fixated on Women's Bodies"
by Eden Arielle Gordon 12 hours ago