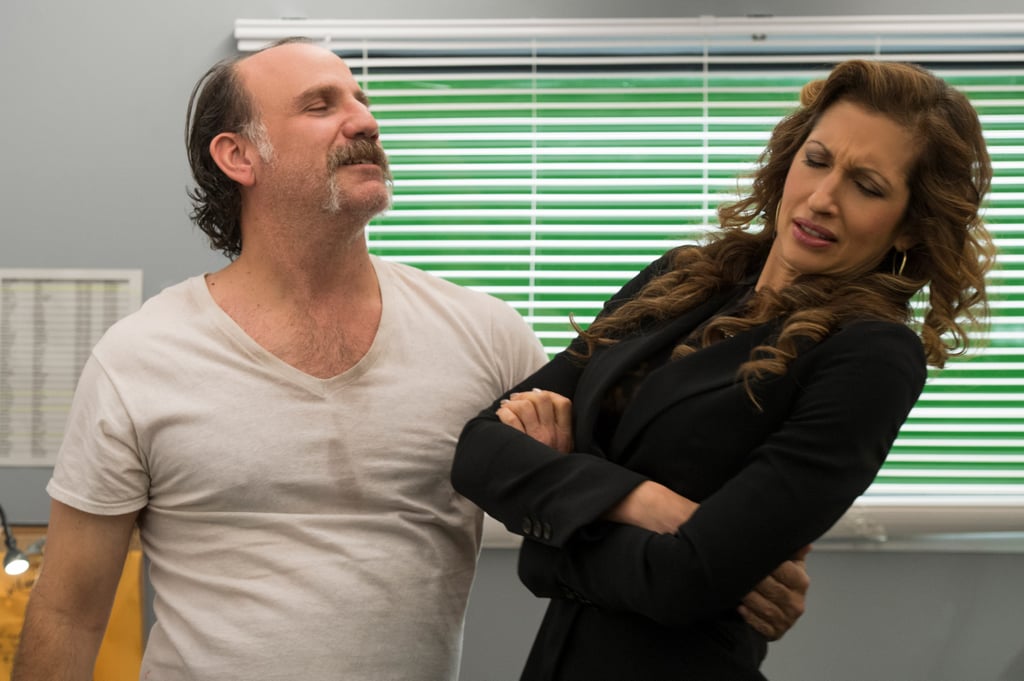 OITNB: Caputo and Fig Are This Season's Cutest Couple, and "Oh, Oh, Oh, They're on Fire"

Warning: This post contains spoilers for Orange Is the New Black season six, but it's been out for almost a week — what are you waiting for?!

Daddy and Daya? Sweet, minus the drugs. Blanca and Diablo? Super cute, but ultimately heartbreaking. Hopper and Aleida? Hard pass. In true typical Orange Is the New Black fashion, season six had no shortage of relationships, but we're putting it right out there and saying that Joe Caputo (Nick Sandow) and Natalie Figueroa (Alysia Reiner) are hands down the cutest couple of the 2018 release. While their relationship could pretty much be described as "hate f*cking" prior to this season, things take a compassionate turn and get quite romantic in postriot territory.

It should come as no surprise that Caputo is pissed at Fig for taking his job and stepping in as interim warden while he is on paid leave, but the moment he gets that fresh haircut and shaves his mustache, it's game over for Fig. Well, sort of. The two do manage to keep up their bickering, but the true turning point for our new favorite couple is when he looks at her and says, "You are so my girlfriend." Fig is able to put her job aside for the sake of her — gasp — boyfriend and what she believes is right, offering him advice on Taystee's case and how to get around the evil being that is Linda Ferguson.

Related:
OITNB's Daddy and McCullough Are Dating in Real Life, and Our Hearts Are So Full

Sadly, their love has a deadline, and as much as we'd like to think Caputo's then-move to Missouri isn't what has Fig making the most of his presence, we're realists. During what they both believe is their last weekend together, not only does he completely reverse her disdain for Bruce Springsteen, but it all comes full circle over karaoke. Did anyone else let out an audible "awww!" when she looks at him on stage and says, "I can't believe you're leaving"? Cool, glad we're not alone. Between the sweet "I'm on Fire" singing session and Fig helping a sloppy Caputo clean up his bloody nose after losing Taystee's case in the finale, we're hoping season seven digs even deeper into their bond and explores the justice they can achieve together for the sake of the inmates.

We have a lot of questions after watching season six, but one thing is absolutely clear: Fig and Caputo are Litchfield's cutest couple. Confused by your sudden attraction to Caputo and your newfound compassion for the duo? You are absolutely not alone. Read on to see how the internet is shipping Fig and Caputo.

Related:
Why Every Orange Is the New Black Inmate Is in Prison
Previous Next Start Slideshow
Orange Is The New BlackNetflixTVTwitter Reactions