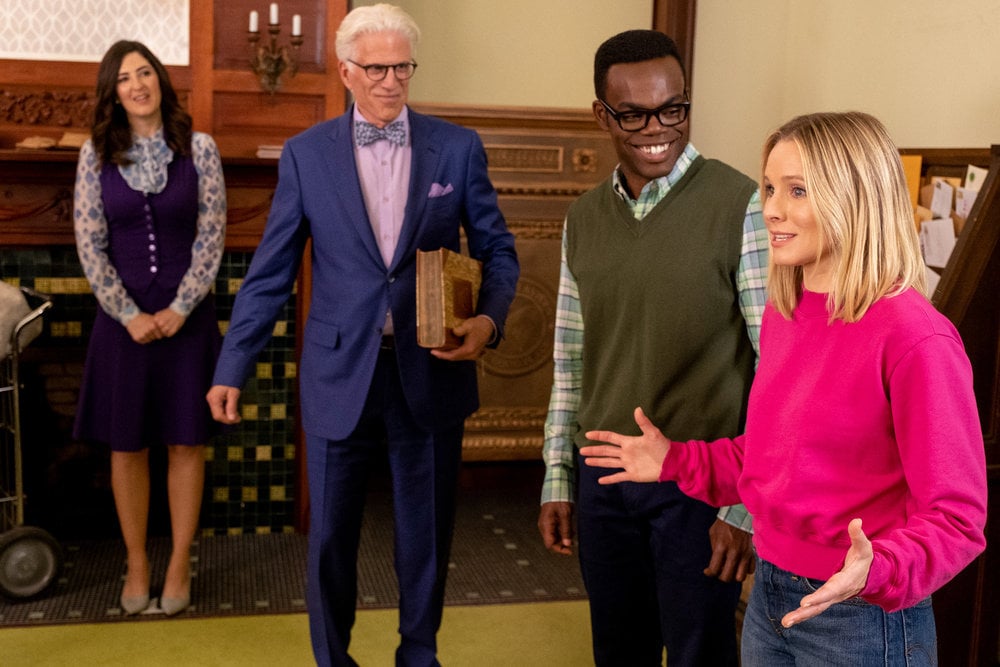 The Good Place might be ending after season four, but the cast's tributes to the series might save our souls from eternal sorrow. Some of the costars, who wrapped filming around early August, began sharing personal anecdotes about the show and how much it's meant to them since it premiered in 2016. On Friday, Jameela Jamil — who plays Tahani — first posted a throwback photo of the cast in 2016, writing, "I thank everyone involved in this beautiful experience. It was a proper team effort and I will never forget any of this, or any of you. Signing off as Tahani officially, as I series wrap. Lots of love. Jam."

The following day, she shared a photo with boyfriend James Blake and described how emotional she felt saying goodbye to her character. "I BAWLED MY F*CKING EYES OUT as they called out 'that's a series wrap on Tahani,'" she wrote. "I love this show, and I can't believe how much it changed my life, and helped my activism and allowed me to do and see things I could never have imagined. Gah. What a mess I will be for a while." She then gave her beau a special shout-out, adding, "Big ups to my boyfriend for staying at work with me til 2am to be there for that moment." Jamil also took to Twitter, calling her work on the show "the most extraordinary experience of my life."

But the homages didn't stop there, as Manny Jacinto, aka the show's loveable airhead Jason, also bid farewell to The Good Place. "Four years goes by quick," he captioned a collage with photos of the cast hanging out on set and at an Entertainment Weekly photo shoot during this year's San Diego Comic-Con. Marc Evan Jackson — who portrays the hilariously evil and sarcastic immortal Shawn — shared the same EW portrait of the cast, writing, "‪I haven't the words for what this show means to me. ‬‪Thank you, everyone. ‬Thank you, Mike Schur. ‬‪Thank you for The Good Place. Mmmmm...you know." Kristen Bell — the straight-to-the-point, Chidi-loving Eleanor Shellstrop — replied to Jackson on Twitter, saying, "You are our favorite little devil."

The series' third season left us on a major cliffhanger, which means the final chapter is sure to be a wild one. We have so many questions that need answering, but one thing we know for sure is we'll be stuffing our faces with shrimp à la Eleanor to cure our sadness when the last episode airs. Look ahead to read some of the tributes so far!

Related:
2019 TV Scorecard: Which Shows Have Been Renewed or Canceled Already?
Previous Next Start Slideshow
The Good PlaceTVJameela JamilManny Jacinto