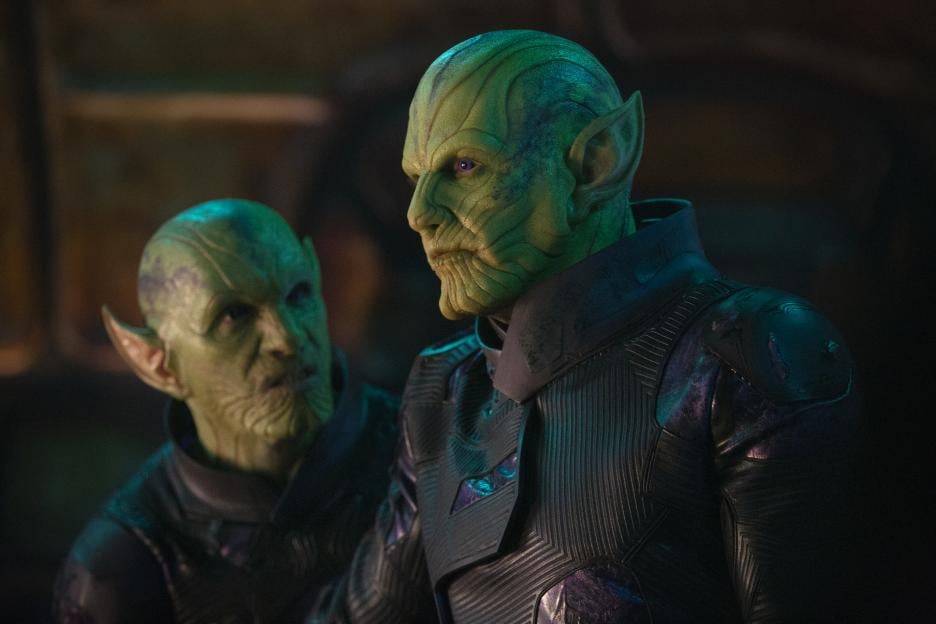 Because it's set in the '90s, Captain Marvel is a prequel to most of the Marvel Cinematic Universe. But there's one film in particular that it most directly preludes: The Guardians of the Galaxy. Watching the new movie, you'll encounter Ronan the Accuser and Korath, two familiar faces from the 2014 Marvel installation. While we learn about Carol Danvers's past, we're also getting the backstory about the Kree-Skrull War. Need help connecting the dots between these two movies? Here's how the Kree baddies fit into both Star-Lord and Captain Marvel's narratives.

Going by a chronological timeline, let's take a look at Ronan as we see him in Captain Marvel. What you need to know is that in the '90s, the Kree (an alien race) have been fighting the Xandarians and Skrulls (other alien races) for a long time. Because the Kree haven't agreed to a peace treaty yet, Ronan hasn't become a radical as of Captain Marvel. But he's not exactly on the good side either. It turns out that the Skrulls are actually refugees trying to find a place to live as the Kree brutally propel the war onward. In the movie, Ronan's in cahoots with Mar-Vell's nemesis Yon-Rogg, who calls upon him to destroy Earth with missiles. Luckily, Danvers taps into her full powers and defeats Ronan, causing him to retreat after she destroys his bombers. Captain Marvel promises to return to space, vowing to end the Kree-Skrull War and help the Skrulls establish a new home.

By the time we get to Guardians of the Galaxy, it's 20-something years later, after the Kree have put in place a peace treaty. With Korath as his loyal subordinate, Ronan teams up with Thanos, promising the Dark Lord to find the Power Stone. In exchange, Thanos would help with fighting the Nova Corps from the former Kree enemy planet Xandar. Things don't go as planned for Ronan and Korath, who end up as intergalactic toast thanks to the Guardians.

Guardians introduces the Kree after their intergalactic war, and Captain Marvel shows them while they were still fighting. Now the only thing that's missing is what happened between these two periods. Was it actually Danvers who stopped the war? How did Ronan become radicalized? These sound like questions that Captain Marvel 2 can properly answer. Or, if we're lucky, we might find out sooner, since Captain Marvel is definitely going to be in Endgame.