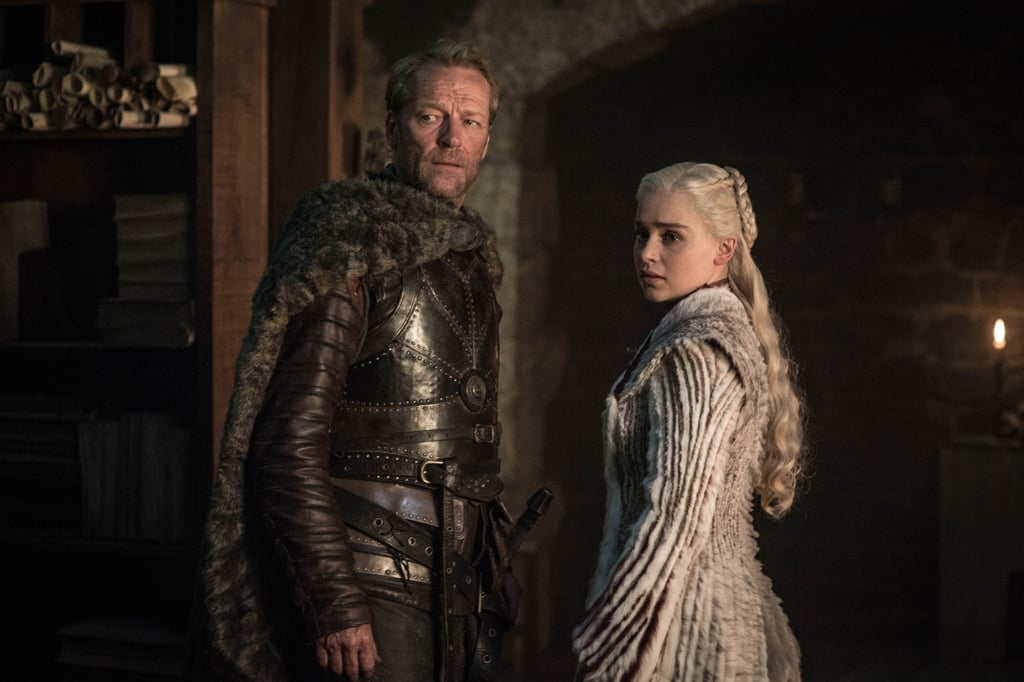 Game of Thrones: The Final Moment Between Jorah and Daenerys Was a LOT to Handle

Warning: The following post contains spoilers about the Battle of Winterfell on Game of Thrones. Proceed with caution!

After 82 minutes of heart-racing bloodshed in the battle between the living and the Night King's Army of the Dead, Game of Thrones fans have a lot to process. While Westeros's most dangerous assassin Arya Stark takes down the Night King, many beloved characters fall to his deadly army. Little Lyanna Mormont dies by bravely taking out a dead giant. Theon Greyjoy is impaled by the Night King after protecting Bran throughout the battle. And Ser Jorah Mormont dies while protecting his queen, Daenerys.

Toward the end of the episode, Jorah and Dany find themselves alone on the battlefield, forced to fight off a horde of the undead. He uses the sword Samwell gave him in last week's episode to protect his love (reminder: he believes he was put on this Earth to defend Dany), but in doing so, he endures multiple stab wounds.

As the Army of the Dead collapses thanks to Arya's act of bravery, Jorah dies in Dany's arms. Needless to say, she is incredibly emotional. With Rhaegal by her side, comforting her and also reeling from the damage done to Winterfell, fans can see Daenerys processing the loss of her loyal protector.

"There had never been a moment where she more needed someone to fight to protect her than this moment," series creator D.B. Weiss said in an Inside the Episode clip. "If he could have chosen a way to die, this is how he would've chosen to die." After everything Jorah and Daenerys have been through together since season one, it's a heartbreaking death to witness, but we can't imagine he would go out any other way than protecting his queen. Ahead, see how fans are reacting to Jorah's death.

Related:
The Preview For Next Week's Game of Thrones Episode Shows Even MORE Trouble in Westeros
Previous Next Start Slideshow
Game Of ThronesTVTwitter Reactions
Around The Web

Nostalgia
From Usher to Ray J, These Are All the Stars Who Appeared on Moesha Over the Years
by Camila Barbeito 3 hours ago