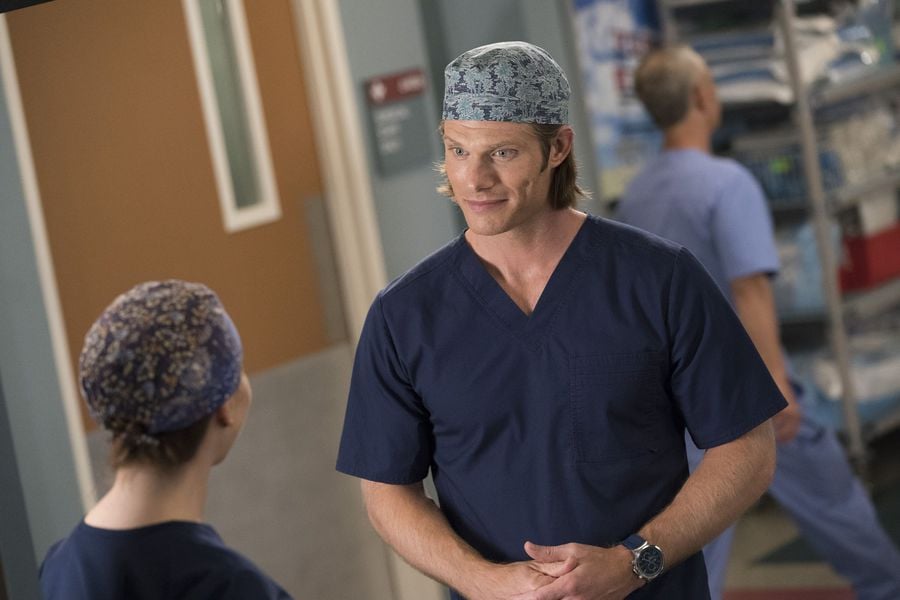 When it comes to Grey's Anatomy romances, we've learned to expect pretty much any and all combinations over the course of 15 seasons. The new season, which premiered Thursday night, wasn't short on love stories old and new — fitting, considering this season is being promoted as the "Season of Love." The big question, of course, is whether or not Meredith will be part of that, and if so, with whom. Meredith's been on her own since Derek died several seasons ago, aside from a brief flirtation here and there. Thursday night's episode introduced us to a new contender for Meredith's heart: Dr. Atticus Lincoln, the new "Ortho God."

There's no denying that there's definitely some kind of chemistry between Meredith and "Link." He flirts, she's awkward — it's all the classic signs of an incoming mildly inappropriate workplace romance . . . like all our cherished Grey's couples. But should the two of them hook up? If you ask me, Link could be just what the doctor ordered for Meredith, in addition to being the boost Grey's itself needs too.

In earlier seasons, Grey's was full of fun hookups among its hot young doctors. As the years have gone on, the characters have matured and grown into more stable relationships, which is realistic but definitely a different kind of energy. A fresh new romance, especially for long-single widowed Meredith, could breathe fresh life into these familiar characters and storylines without resorting to constant cycles of break-up-and-make-up among the existing characters.

Plus, with his sly charm and apparent lack of enormous baggage (for now, at least), Link could be the perfect match for Meredith right now. As she finally admitted to her matchmaker patient, Cece, she's been married to her job for too long and could use a fun, romantic storyline, whether it's long-term or not. And it's definitely easier to root for a new character when they're part of an established favorite's storyline, so this would be the perfect way to get to know Link. We've already lost some of our favorite couples on Grey's — we desperately need a new one to get invested in, and this looks like it just might be it! The only question left is: what is their shipping name?!

OAN: Anyone come up with a ship name for Meredith and Link? Is it Merlink😂😂😂? #GreysAnatomy