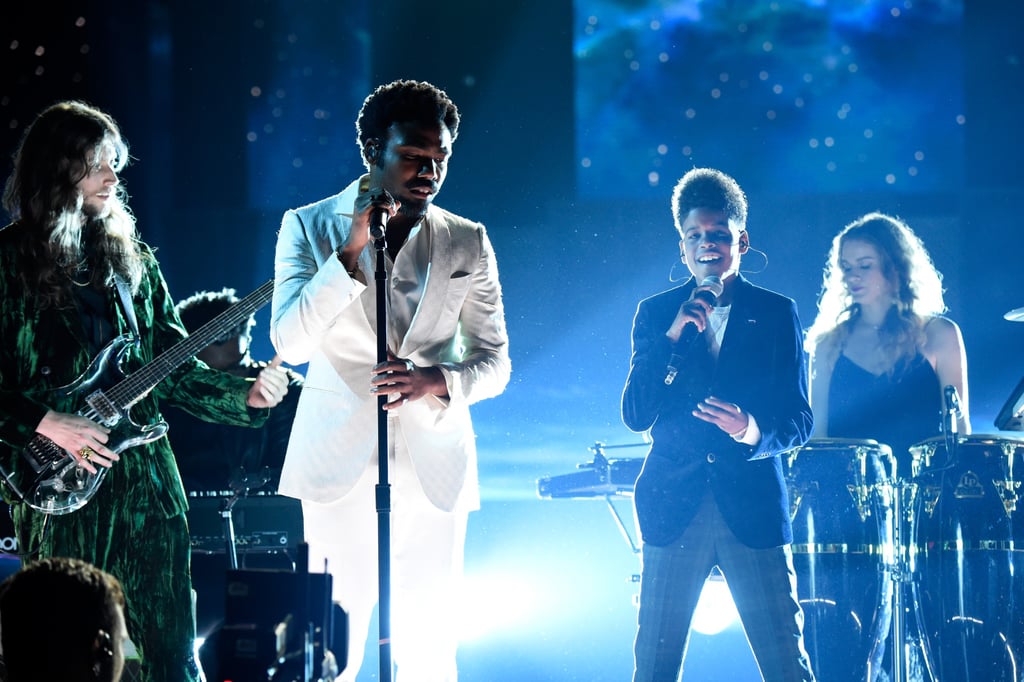 We've known that Donald Glover is a renaissance man ever since he released two separate hip-hop albums while also playing fan-favorite Troy Barnes on Community, but his wide array of talents have never been more obvious than they are now. Glover, who creates his music under the pseudonym Childish Gambino, is halfway to joining the prestigious ranks of Hollywood's EGOT winners now that he's won a Grammy for "Redbone" and two Emmys for the show he produces, stars in, and created, Atlanta. (Did we mention that he also wrote for 30 Rock and does stand-up comedy?) The NYU grad celebrated his Grammy win by performing at the 2018 award show, and it drew a passionate reaction from viewers.

Rocking an all-white suit and still sporting a mustache worthy of Star Wars's Lando Calrissian (who he plays in the upcoming Han Solo origin film), Glover performed the sexy anthem "Terrified" from his Childish Gambino album Awaken, My Love! As the performer crooned his smooth sounds and shared the stage with his young Lion King counterpart, the internet erupted into a hot mess of envy, attraction, and awe over Donald Glover's seemingly endless talent. Certainly not for the first time, people weren't sure whether they want to be Glover or marry him — but the undeniable consensus following his performance is that he's a major inspiration.

Check out some of the best reactions to his Grammys appearance, then watch his performance in full!