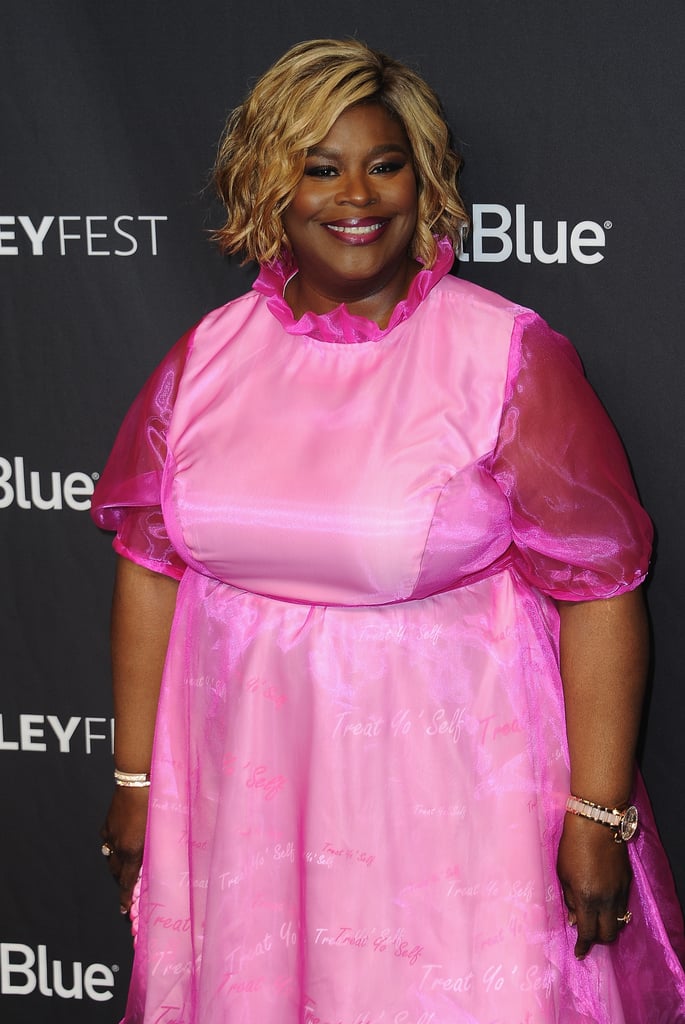 Fans of Parks and Recreation have a lot to be grateful for. The NBC series gave us many gifts over its seven-season run, including amazing TV friendships, the empowering Galentine's Day traditions, and, of course, the best day of the year: Treat Yo' Self. And while actress Retta may be tired of people yelling the catchphrase to her on the street, she still has lots of love for it, which she aptly illustrated during the PaleyFest Parks and Rec panel on March 21.

The Good Girls actress walked the blue PaleyFest carpet in a gauzy pink knee-length dress that had "Treat Yo' Self" embroidered all over the skirt. The outfit was not only sweet and fun (and made by Retta's frequent collaborater, designer Jaime Elyse), but it paid the perfect homage to the iconic holiday that Retta's Donna Meagle and Aziz Ansari's Tom Haverford popularized way back in 2011. As the Parks and Rec Twitter account put it, "It's all in the details!"

If you're wondering what that is or have forgotten its significance in the four years since Parks and Rec ended in 2015 — shame on you. Just joking, but not really! Treat Yo' Self is the holiday created by Donna and Tom, in which they spend one day every year spending lavishly and treating themselves. What do they treat themselves to? "Clothes. Fragrances. Massages. Mimosas. Fine leather goods. It's the best day of the year!" Suffice it to say, the day caught on, and every year on Oct. 13, Parks and Rec fans spend the day living like the only two Pawnee residents with taste! (Sorry, Leslie.)

Retta's dress is a wonderful call-out to one of her character's best moments — of which there are plenty — and just an awesome treat for Parks and Rec fans in general. Check out photos of the dress ahead, as well as clips from the show's celebrations of the "best day of the year!"

Related:
The Parks and Rec Cast Reunited, and Oh, How We've Missed These Beautiful Tropical Fish
Previous Next Start Slideshow
Parks And RecreationTVRettaPaleyfest