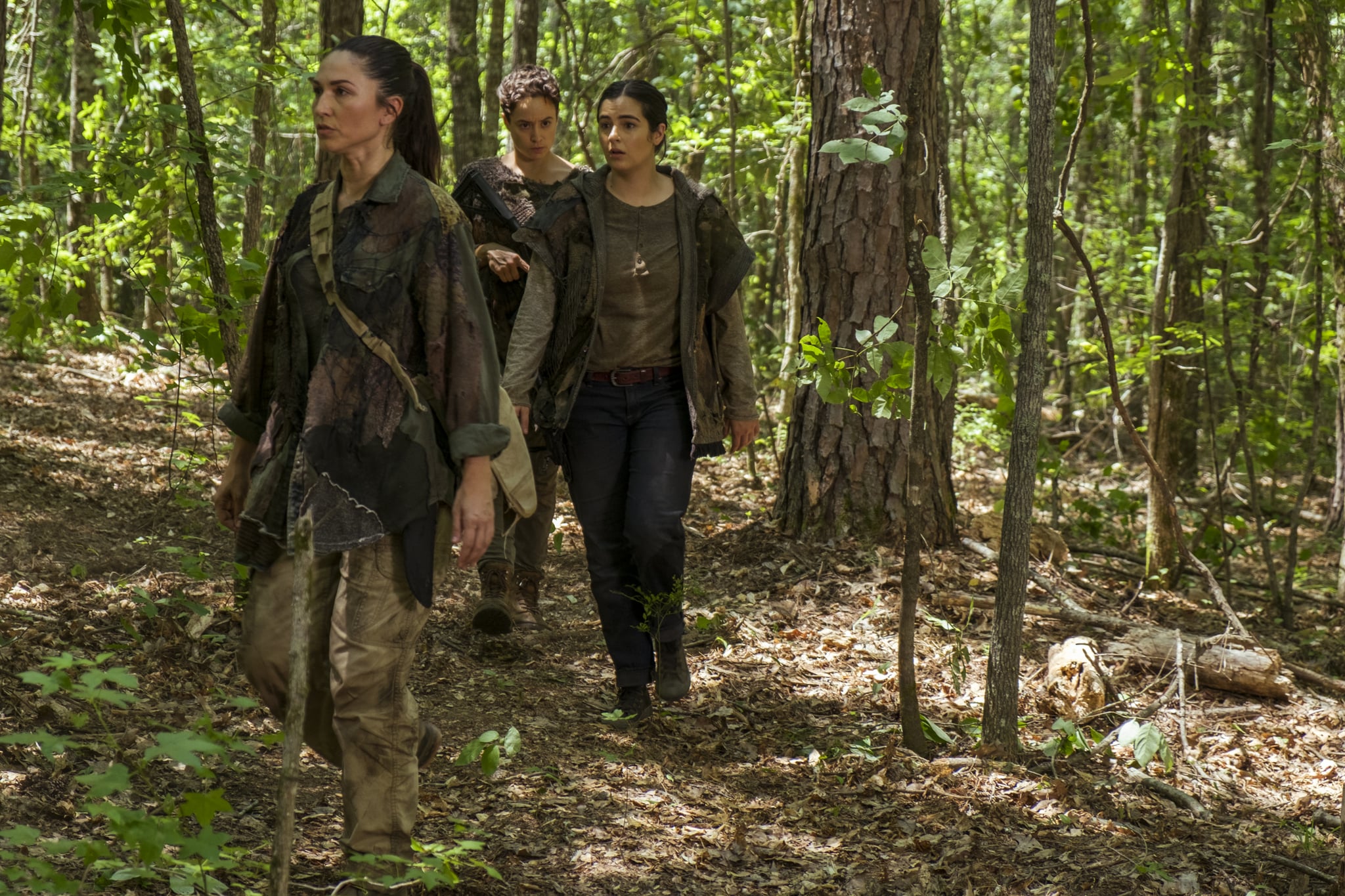 I don't think I'm alone in saying that the most recent episode of The Walking Dead, "Swear," is more than a bit frustrating. Like previous episodes this season, it centers around one story and one story only, resulting in the plot inching forward slower than the legless zombie from season one. After that devastating premiere, we can understand what they're going for, but it's still incredibly annoying to check in with only one or two main characters at a time. The only redeeming factor in "Swear," which features an update on supporting characters Tara and Heath, is that it introduces a new community, one that might be the deciding factor of who wins the war between Rick and Negan.

After Tara and Heath get separated when she falls off a bridge in the middle of a surprise walker attack, she washes up on the shore of a beach patrolled by the gunslinging women of the Oceanside Cabin Motor Court community, and later stumbles into their camp after being spared by one of its members. The camp is made up entirely of women (prompting Tara to hilariously ask at one point, "I never thought I'd be asking this, but where are all the men?"), most of whom want to shoot Tara on the spot. Thankfully the community's leader, Nanette, intervenes, and offers her a chance to tell them the truth about her origins and the opportunity to become a part of Oceanside. Tara rejects the offer, saying that she wants to get back to Alexandria to see her girlfriend, whom she doesn't yet know is dead (RIP, Dr. Denise). Nanette says that's fine, and sends Tara on her way with two escorts to ensure her safety. Of course (of course) they try to kill Tara, but not before she learns an important piece of information: there aren't any men in Oceanside because the Saviors brutally murdered any male older than 10.

Is any of this surprising information? No. Negan and his merry band of murderers aren't exactly stand-up dudes. The important thing to remember is that this is yet another group that has the potential and the motivation to be mobilized in the battle against Negan. As much as I've been questioning The Walking Dead's storytelling abilities as of late, I find it hard to believe that they'd dedicate nearly an entire episode to introducing a new community (one that barely appears in the comics, no less), only to never revisit them in the future. It's starting to look more and more like Maggie will become the official leader of Hilltop, which she'll then unite with Alexandria and Ezekiel's Kingdom to try and destroy the Saviors. Just when you think that all hope is gone and that Negan is primed for victory, Tara will ride in at the last minute with the help of Oceanside, like some kind of zombie apocalypse version of Rohan saving Gondor.

Or Negan will just kill everyone. Who knows?