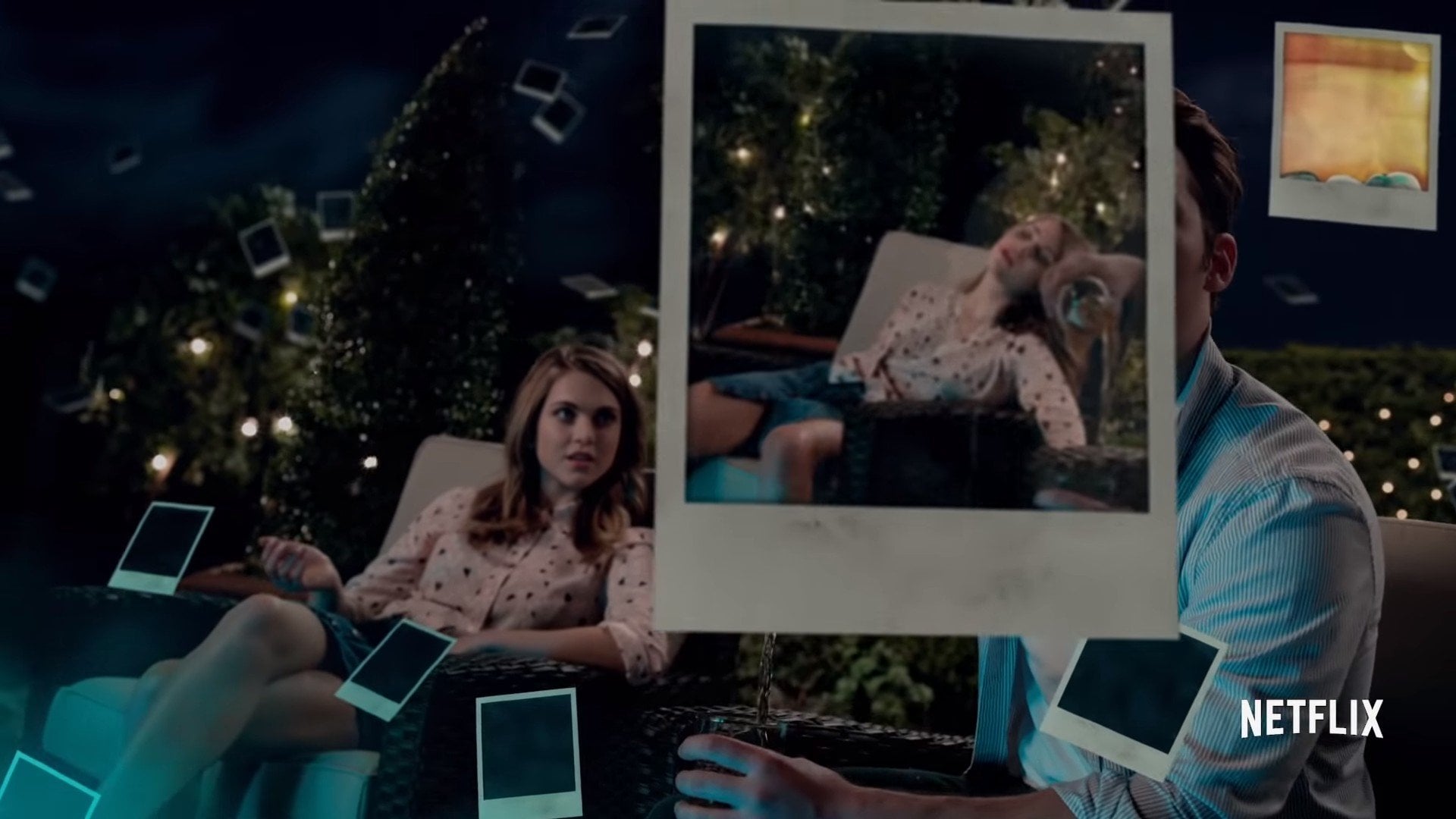 The 13 Reasons Why season two trailer has arrived, and the Polaroid-filled teaser is full of clues about what's ahead for the returning characters. However, there's one new character included in the trailer as well, and she could play a major role in the drama at Liberty High.

Bryce is shown sitting by a young woman during his portion of the trailer. She appears to be happy — she looks relaxed, and he's pouring a drink — but then a Polaroid picture passes over her image and we see her slumped over asleep while Bryce grins. It's an eerie shot and a powerful way to introduce the character of Chloe to the world of 13 Reasons Why.

Chloe is one of several new characters being added to the main cast in season two, and she's played by Anne Winters. The trailer certainly makes it seem like she's going to play a major role in the story moving forward. The image of her either asleep or possibly drugged beside Bryce recalls the horrors that Hannah and Jessica go through in season one. While it's currently unclear if she's going to be Bryce's next victim, series creator Brian Yorkey told The Hollywood Reporter that the new season will focus on sexual assault — both the scary reality of repeat offenders and the process of recovery as Jessica begins to move forward with the knowledge that Bryce raped her.

It seems Chloe will bring a new dimension to the series. Right now, not much is known about her, but she is confirmed to be the head cheerleader. She's also described as both the "It girl" and the "mean girl," but there's way more to her than first meets the eye, according to her portrayer.

Related:
A Brief 13 Reasons Why Recap, Because It's Been a While Since You Listened to the Tapes

In an interview with POPSUGAR, Winters explained, "I definitely bring something new to this season. I think I represent the blurred lines — in season one it's very black-and-white of what's right and wrong — and I think my character explores a very medium line. I'm really happy that I got to portray this character. I think a lot of girls will relate to it. I definitely did."

Winters also confirmed that Chloe will be in every episode of season two and that her interactions with Bryce, Monty, Zach, and Jessica will be particularly important. That definitely makes it sound like she's firmly entrenched in the popular crowd, and even though she didn't play a role in Hannah's story last season, that doesn't necessarily mean she's new to this group. Given that season two will also feature the Bakers taking their case against the school board to trial, it's entirely possible that Chloe is connected to Hannah in some way — even if it's tangential.

Right now, the only thing that is certain about Chloe is that her role is going to be a major one. Not only is she the only new character in the trailer, but she's also seen with Bryce, a person whose horrifying actions seem destined to finally catch up with him. Given that Winters says her character is a person who defies easy labels, could she be the one behind the Polaroids? Only time will tell, but when the new season lands on Netflix on May 18, it might be a good idea to keep your eyes on Chloe.