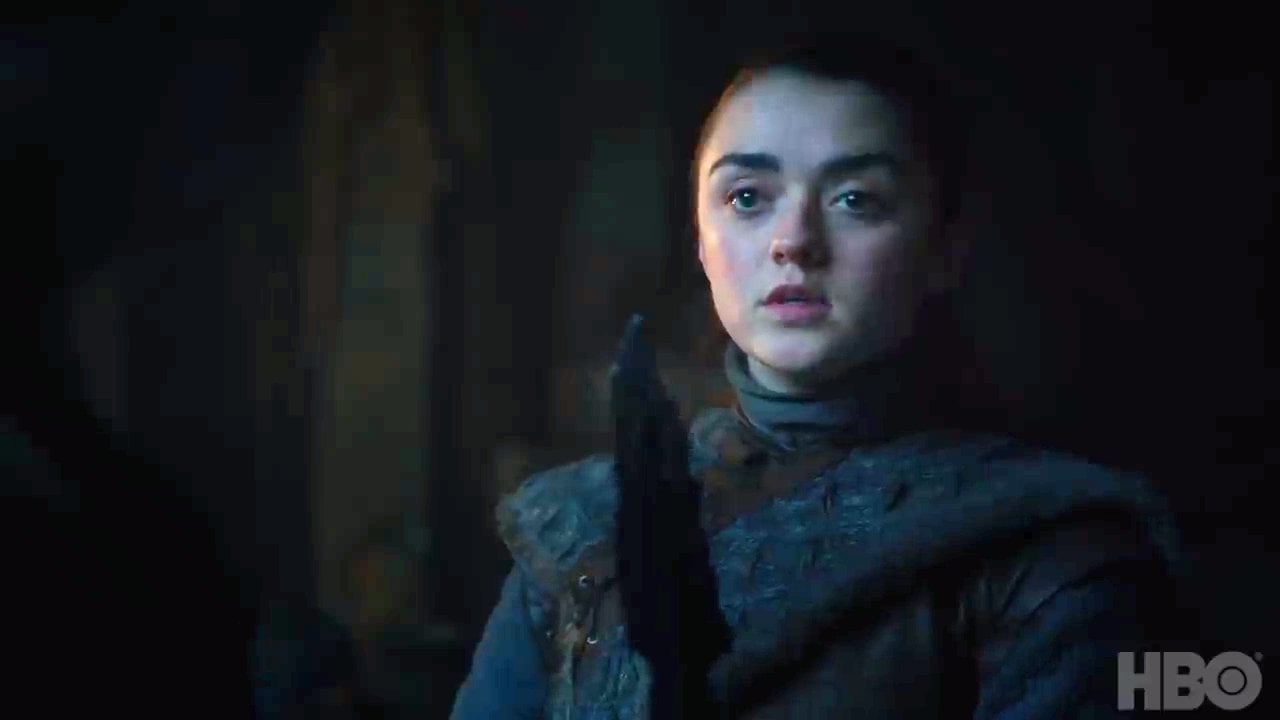 After a long wait, the full trailer for season eight of Game of Thrones is finally here. It's an intense ride from its opening moments, which feature a terrified Arya Stark (Maisie Williams), with blood or dirt on her face, running away from . . . something. What's got her so terrified, and what does the brief scene suggest about the show's grand finale?

The one thing that seems pretty certain from the environment around Arya: the setting. Judging by the appearance of the stone walls and corridors around her as she flees, it looks like whoever — or whatever — is pursuing her has gotten within the walls of Winterfell itself. That in and of itself is unsettling, seeing as Winterfell has once again become the stronghold of House Stark and the first (or last) stronghold against the White Walkers. But what's even more unsettling is the look on Arya's face. She's dirty, tired — and frightened. That's not an emotion we're used to seeing from the tough, stoic young fighter. What could possibly have frightened her into a terrified retreat?

Arya running through the halls of Winterfell evokes an image from the previous teaser trailer, which saw Sansa, Arya, and Jon walking through the crypts of Winterfell while dialogue from past seasons played over the footage. Unfortunately, that trailer was, in all likelihood, a special shot for promotional purposes, not an actual scene from an upcoming episode, so there's little to be gleaned there. The only thing that the two trailers together seem to imply is that Arya's journey will come to an end, for better or for worse, as a Stark and as a fighter.

"I know Death. He has many faces. I look forward to seeing this one," Arya says in a bit of dialogue over the footage of her fleeing, before it melts into a shot of her apparently preparing for battle. This bit of dialogue could potentially be a clue to who her pursuer is. In previous seasons, Arya joined the Faceless Men and learned their tricks of disguise. Even after she elected not to continue down that path and re-embraced her identity as Arya Stark of Winterfell, she continued using some of the techniques she learned under their tutelage. It's possible that the brotherhood — or Jaqen H'ghar himself — is seeking retribution for her using the powers they gave her outside of their jurisdiction.

Another potential suspect? A returned character, someone back from the dead as a wight. We already know that at least one reanimated wight will play a role in the final season (Viserion), so it would make sense if other dead characters came back similarly. The most popular candidate would probably be Arya's mother, Catelyn Stark, who was killed five seasons ago on the show but, in the novels, had a return arc as "Lady Stoneheart." Since Game of Thrones never did that arc, it's possible they were saving it for this — and her evil, reanimated mother would definitely send Arya frantically running down the halls!

The other question, of course, is why Arya encounters her pursuer at all. In the middle of the shots of her running away, there's a brief shot of Varys and several others, apparently hiding in the crypts of Winterfell (a statue, possibly of Robb Stark, can be seen in the background). If the two scenes are actually happening at the same time, like they are in the trailer, Arya might be distracting or fighting an enemy to keep the non-fighters safe. We don't have the answers now, but we won't have too long to wait: the final season of Game of Thrones begins on April 14.