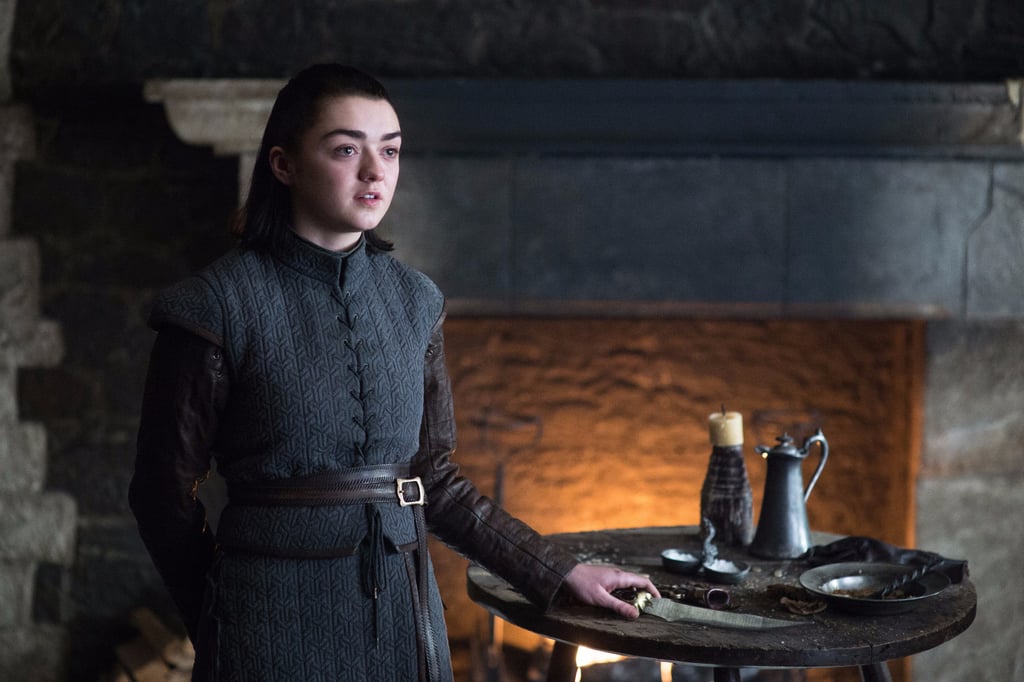 As I write this, I'm mentally prepared for an angry mob outside my front door. After all, there's no fandom more passionate than the one surrounding Game of Thrones, and unpopular opinions don't often go over well. But here it goes: I think that Arya Stark is the most overrated character in the series. *dodges rotten tomatoes*

I don't actively hate Arya. I just don't necessarily like her.

Hear me out! I don't actively hate Arya. I just don't necessarily like her. And for most people, that's enough to label me crazy. I'm not trying to convert anybody else away from the Arya fandom . . . I think loving her character is perfectly valid, and there's no denying that she's fun to watch! I just personally don't believe that she's worthy of all the hype that she receives from the show's fans.

Perhaps it's because, from the start of the show, she's been used as a means to tear down her older sister, Sansa, one of the best characters in the series. Many Game of Thrones fans — both book-readers and show-watchers, mind you — hold tomboyish Arya up as an example of somebody who's better than Sansa because she can fight with a sword and doesn't trifle with "girly" things. I won't delve into the inherent sexism of this reasoning, but I'll say that it's put a sour taste into my mouth about Arya from the start.

Don't get me wrong: Arya Stark is one badass motherf*cker. But is that enough to deserve the hype?

Don't get me wrong: Arya Stark is one badass motherf*cker. There is no arguing that she is an incredible fighter and that her faceless skills make her a valuable asset when it comes to exacting revenge. But is being badass enough to deserve all of this hype?

Arya has done very little by way of character development. Hell, her entire House of Black and White plotline proves that she is incapable of truly changing as a person. From season one, Arya has proven that violence is her go-to answer for nearly everything . . . and mid-season-seven, when she lashes out at Sansa for not beheading bannermen who disagree with her family, she proves that she hasn't changed a bit. (Except, of course, to become more like Joffrey Baratheon, who executes their father for the exact same reason and also enjoys cruelly taunting people he has power over. Just saying.)

Let's explore this lack of development a bit further; Arya, who has all sorts of training in lie detection and the art of deception, falls right into Littlefinger's manipulation game thanks to her own personal grudge against her sister. In her chat with Sansa about the note that she discovers through Littlefinger's scheming in season seven's sixth episode, Arya not only jeopardizes the entire Stark family's newfound peace and wellbeing by vaguely masking death threats against Sansa, but also displays her own incapability to see situations clearly when it comes to her own biases. Sansa reminds Arya that she is playing directly into the hands of those who wish them harm — Cersei, and others like Littlefinger — but speaking reason does no good.

Plus, let's not ignore the holier-than-thou attitude that isn't a good look for anyone. Arya tells Sansa that she remembers her sister "standing up there" with Cersei and Joffrey as Ned was executed, but she seems to forget that Sansa had to be held back as she screamed and collapsed during Ned's execution. She also makes a derogatory comment about Sansa knitting when they were kids, as if having different hobbies is a crime deserving of scorn. Sitting on a high horse is never appealing, but it's especially annoying coming from Arya when she's unnecessarily threatening family members.

Of course, I am extremely lonely in this belief, and the response from GOT fans who disagree with me consistently proves it. Check out a day in my life as a lone wolf in the Arya-ambivalence camp. Spoiler alert: it ain't pretty.

Nostalgia
These 15 Disney+ Shows Each Have Over 5 Seasons to Binge — What Are You Waiting For?
by Sabienna Bowman 28 minutes ago

by Danielle Jackson 2 minutes ago