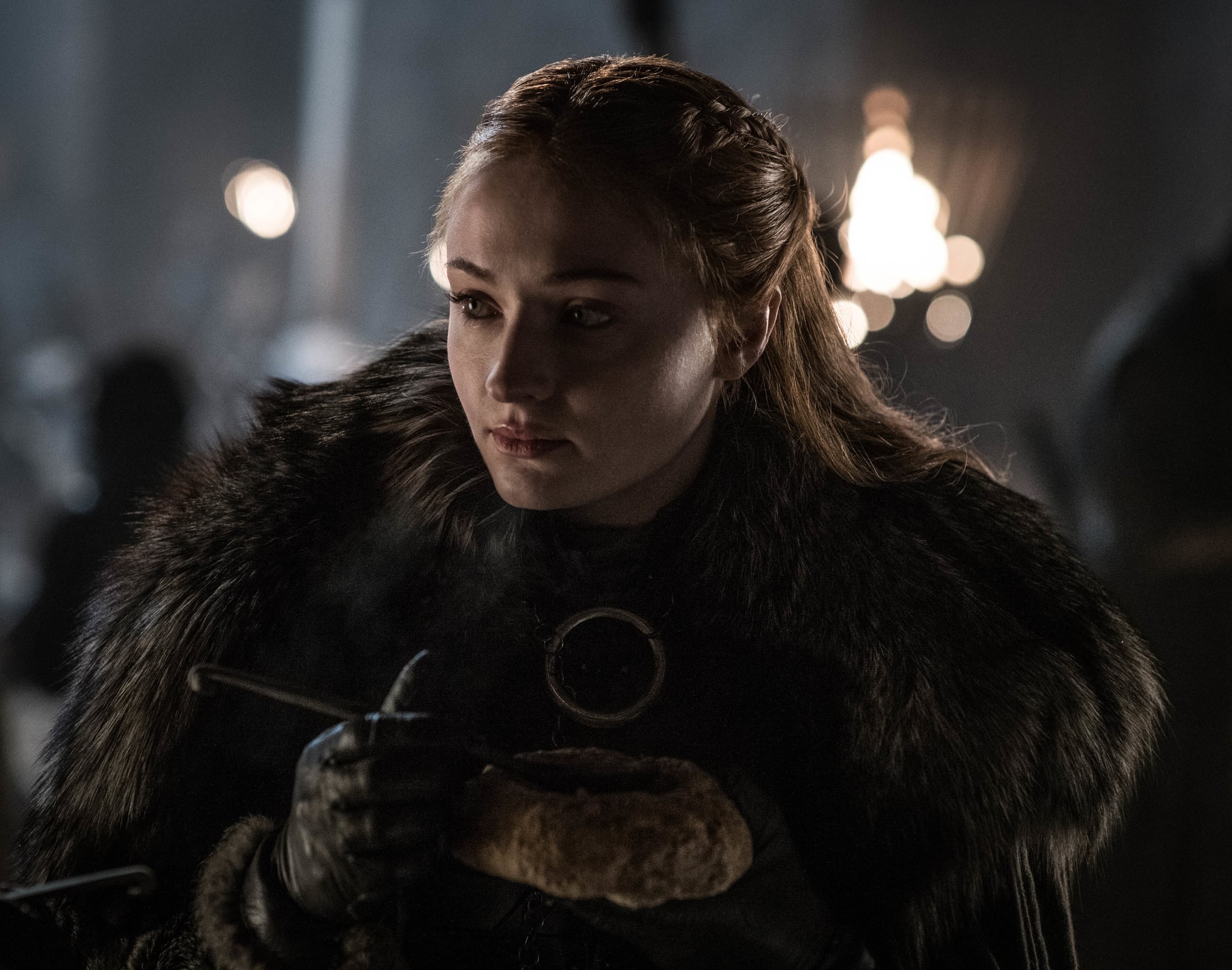 One thing I personally love about Game of Thrones is the number of badass women it has — women who have been through hell on earth and come out swinging. I'm talking about Cersei Lannister, Daenerys Targaryen, Olenna Tyrell, Brienne of Tarth and Sansa Stark. That's right, Sansa of House Stark, eldest daughter of Ned and Catelyn and Lady of Winterfell. Who, even after the craziness of season seven's finale where she took a serious level up in baddass, people still hate on. Look, I get it. Every character has haters for various reasons, and they feel completely justified for it. That's totally fine, but if you hate Sansa Stark because of her past characterization, you're wrong and I'm here to tell you exactly why.

Let's Clear One Thing Up For You Sansa Haters

We first meet Sansa when she's a preteen girl — not just any preteen girl, but one that has been raised as the eldest daughter of a great House and had her head filled with pretty songs and romantic stories. She's naive, lost in dreams of perfect princes, and undeniably spoiled. Basically, she's every little girl who had the fortune to live a sheltered, idealistic life with no real concerns aside from being a proper lady. She's just as bratty as one would expect, much like her younger sister, fan favorite Arya, although yes, in a different way. So why all the hate? A lot of it stems from Sansa seen as the "soft" female character, one of the most classically feminine characters on the show. She likes "girlie" things, she faints, and she cries a lot. But these reasons are incredibly superficial and sexist; as if Sansa's femininity is a weakness instead of it being another reason she's fierce in the same way that Cersei or Dany, who are also very feminine characters, are. Instead, people take Sansa's initial passiveness as a sign of her overall character and never see her beyond that. This brings me to my first reason that Sansa Stark is a badass queen.

She's Been Through Hell and Back, but She's Survived

After her father's beheading, Sansa's life spins all the way out of control. She's entirely alone, with her family being killed off one after the other, and she's being put through her own hell at the hands of the ruling family. Everywhere she turns is another person just waiting to use her as a pawn in their little game. Through all of this, Sansa does not back down. She plays the part of a demure lady and uses her grace and courtesy as her armor to stay alive in court. She doesn't have a true protector while at King's Landing, so she toes the line to keep herself in the good graces of Joffrey and Cersei, or rather, keeps herself under the radar just enough to suffer their disdain. Even when she's physically beaten in front of the court, she maintains her facade and doesn't slip when Tyrion helps her out. Sansa is smart enough to know when to go along with things and keep her mouth shut. There's a reason Tyrion says, "Lady Stark, you may survive us yet." He knows that her abilities to adapt and keep her cards close to her chest are skills vital to surviving in King's Landing, and he respects her for learning how the game is played. Though Sansa does tend to trust the wrong people (looking at you, Petyr the Creeper), she survives everything they throw at her, whether it be her insane Aunt Lysa, Ramsay, or Petyr himself. She comes out stronger, smarter, and more determined than before. She is not the same little girl whom Cersei called "little dove."

Her Strength Isn't Magical, It's Realistic

Of all the Starks remaining, Sansa is the only one who hasn't had any supernatural or otherworldly help to get to where she is. She isn't the three-eyed raven, hasn't been taught by any Faceless Men and assassinated multiple people with said teachings, nor does she have R'hllor ready to bring her back to life, while possibly being the Prince That Was Promised. Sansa is a normal person in a chaotic world, using her brains and the help of the other ordinary people around her to survive. That's one of the main reasons she is able to connect with people on a level that Jon, Arya, and Bran cannot; she is realistic, grounded, and powerful in her own right. That's why her growth over the seasons has been so great to see, because she doesn't have magical powers or dragons to save her. She has to be smart enough to find what and who will work for her. Even when her sister is freaking her out with talks of taking faces and deadly threats, Sansa does her homework and works with both Bran and Arya to take down Littlefinger after his attempts to divide the siblings.

People Continue to Be Terrible, but She Stays Gracious

Despite everything that's happened to her, Sansa has managed to keep her compassionate nature. Sansa is sweet to Tommen during her time in King's Landing, even though he's part of the family that tortures her, probably because she recognizes a kindred spirit in the little boy. She risks the ire of Joffrey and Cersei to save Sir Dontas's life, and during the Battle of the Blackwater, she is the one who calms the people of King's Landing despite being terrified herself. At the Eyrie in the Vale of Arryn, she shows affection to Little Robin even though he's every babysitter's worst nightmare. Some may say she's lost that kindness by the premiere of season seven, after she argues with Jon about what to do with the land of Houses Umber and Karstark. However, an important distinction to make is that Sansa isn't advocating for the execution of anyone. She is wisely saying that it might not be smart to allow highly vital pieces of land to be controlled by people they don't know they can really trust who may hold grudges against them. Also, one of them is literally a child. Not everyone is Lyanna Mormont!

After Jon is crowned King in the North in season six, we all knew there would be some tension between him and Sansa, especially because he has a habit of not listening to her advice. In the premiere of season seven, we see this trend continue and that Sansa is definitely not about that life. She does not gave a damn if Jon is king — if she has questions, she's going to ask them. After all, of all the Starks who remain, Sansa understands the nuance of the political realm the most having spent so much time in King's Landing and having Littlefinger as a "mentor." Though it makes things way more awkward having the two of them argue in front of all Northern houses, it shows Sansa's refusal to stay silent on matters when she might have before. No longer will this lady sit by, passively playing the games of King's Landing; she is in the North and will express her opinion when she sees fit. This is why it makes perfect sense that Jon leaves Winterfell in her hands when he goes off to Dragonstone: he understands that Sansa is highly capable and the best person to rule in his stead. Which she proves by aptly handling their resources and the heads of houses when they start to question Jon as a ruler.

Related:
How Sansa Has Been Becoming Her Mother, Catelyn, on Game of Thrones

Home Is Where Her Heart Is, and She'll Fight Anyone For It

As she gets older and has more agency, Sansa's fight for survival changes. She's not fighting for the Iron Throne like Dany or Cersei; instead, she's fighting to save her home and keep it. Everything she's done has been to get back to Winterfell, the last place she truly felt safe. When she reunites with Jon, she is the one to push him to fight for Winterfell when he would rather stay away from another war. She repeatedly urges him to gather whatever people he can to join the fight. She even teams up with Petyr, getting wiser to his games each time, and wins the Battle of the Bastards by securing reinforcements from the Vale. When Jon leaves Winterfell for Dragonstone, she works to keep her people well-fed and the various lords content. In the last three seasons, Sansa has become a warrior of her own, with her wits and words rather than weapons. Which some wouldn't think amounts to much against dragons, Red Witches, and White Walkers, but it's been proven that brute strength is nothing without a intelligent mind to direct the hit.

As many people love to point out, Sansa's greatest mentors are the very people she despises: Cersei Lannister and Petyr Baelish. Which is true; those two have the heaviest hands in Sansa's growth after the death of her parents. What that doesn't mean is that she's a mini version of either of them. It doesn't mean she admires them or wants to be like them at all. It means that, considering the circumstances, they helped open her eyes to the truth of what being a woman in Westeros is like and led the charge that ripped away Sansa's naïveté. Sansa learned the rules of the game from both Cersei and Peytr, and it will stay with her for the rest of her life. But so will the lessons she learned from her mother and father. It's the fundamental reason that Sansa remains a figure of good in the world of Game of Thrones; she may have been through some of the ugliest trials, but she also knows the good in the world. She knows how important honor, loyalty, and trust are in a world so full of darkness. Combine that with her lessons at the hands of Cersei and Littlefinger, and she's grown into a formidable lady of a great house.

She May Look Like a Tully, but She's All Stark

Sansa Stark is here to slay. Though raised by her mother to be every inch the proper lady, Sansa has the ability to be ice cold when she wants to be. Whether she's slapping little Robin across the face for getting out of control, taunting Ramsay about his bastard status, or letting Petyr know he can slide right the hell out of her DMs because she has no time for it, Sansa proves that being a lady doesn't mean she's afraid to put anyone in their place. I know you remember one of the few times Sansa let her wolf slip out, when Joffrey has her dragged out to look at the severed head of her father, boasting about how he would gift her with Robb's head as well, and Sansa replies, giving him the coldest side-eye ever, "Or maybe he'll give me yours." Don't play with this she-wolf!