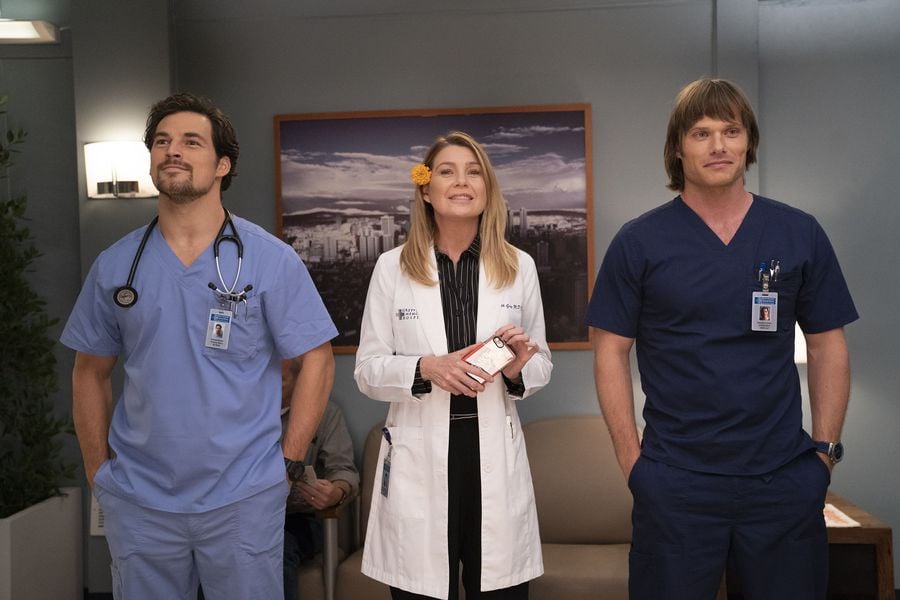 Suffice to say, Grey's Anatomy dropped jaws with its intense midseason finale cliffhanger in season 15, aka the "season of love." On top of all the heartbreaking and juicy reveals, there's DeLuca, who lets Meredith know his true feelings for her — that he thinks she's amazing and that there's something between them. Of course, the two get stuck in a dark elevator together right after this when a storm kills the power at the hospital. While our intrepid heroine has been seeing a love doctor, the triangle between her, DeLuca, and Link has been setting in place like gel on hair. But despite MerLuca becoming an increasingly popular item, I have to admit that I'm not entirely sold on them . . . yet.

Maybe I have a pipe dream that Dr. Marsh will come back. Maybe I secretly have an attachment to Dr. Lincoln's actor Chris Carmack, who I'll forever lovingly associate with The O.C. (Plus we've seen a really sweet side to Link!) Mostly, I'm not boarding the MerLuca ship because DeLuca hasn't quite proven himself as a contender. Sure, his impromptu confession to Meredith is very "pick me, choose me, love me," and Giacomo Gianniotti isn't bad on the eyes, either. Plus, Meredith has even had super steamy dreams about the dude. But, even if they do get together, I'm not sure if they can last on chemistry alone.

Here's how it all starts: Meredith and DeLuca share their first sort-of romantic encounter when he drunkenly plants a smooch on her at Alex's wedding after she gives him a pep talk about heartbreak. If you recall, not too long before their kiss, Andrew festers at Meredith's house after eating one too many edibles and hallucinating about his ex-girlfriend Sam. He plays the guitar and refuses to shower until Meredith intervenes and brings in Carina. Emotionally, they just don't feel equally yoked at this point, maybe since we've just seen Mer go through so much trauma in her life. She obviously cares for him, but almost in a big sister or mentor type of way.

Then, there's the fact that DeLuca doesn't handle dating attendings well. At the beginning of season 12, he and Maggie were a hot item that eventually fizzled out when he felt uncomfortable with people seeing him date his boss. Of course, the showrunners are playing with Meredith and DeLuca's dynamic as attending and resident, throwing back to Mer's earlier relationship with Derek. It's worth mentioning that DeLuca steps into the scene right after Derek dies in season eleven, and it's like we're coming full circle. In a way, their relationship is almost a perfect inverse of Meredith's great love with McDreamy. Andrew is very similar to Derek — confident and hot as hell. It's his situation that's different.

Right now, Meredith and DeLuca's relationship feels lust-based because we haven't gotten to see a deeper side to DeLuca yet. But maybe that's just what this elevator situation will allow us to see — a deeper, more vulnerable side to him that'll speak to our drama-loving hearts. Maybe they'll talk about something meaningful and revealing. Maybe it'll just be awkward as they rush to find ways to get help. Maybe they'll do everything but hook up. After all, people can get very hot and bothered in Grey Sloan's elevators! We'll just have to wait and see when Grey's returns next year.