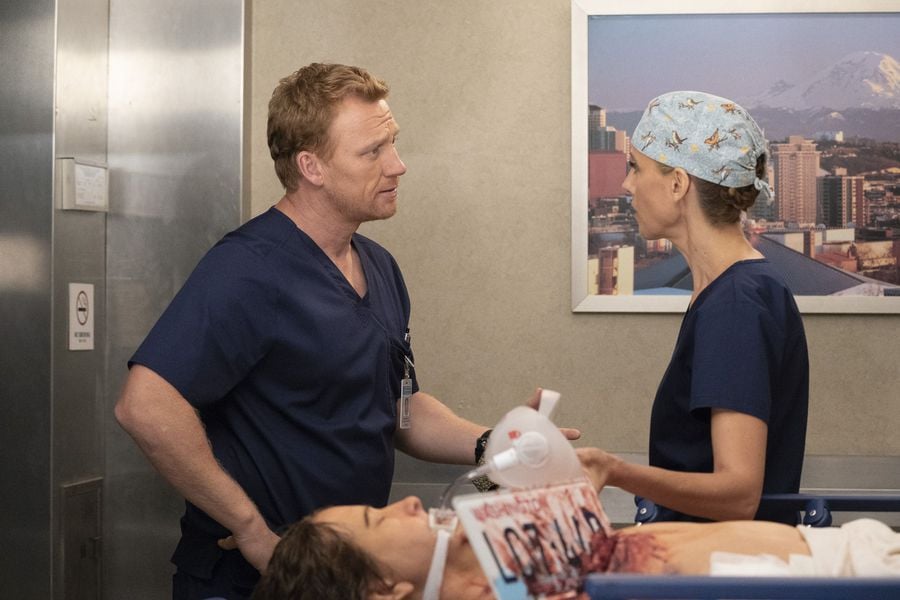 I am in a long-term, committed relationship with Grey's Anatomy. While this show isn't known for allowing its characters to stay together for the long haul, I feel like we've got it in us to buck the trend. Sure, some of our years together have been better than others — season 12 was rocky for us — but we always tend to come through the hard times stronger than ever. However, right now, Grey's Anatomy is stubbornly digging its heels in on something that it very well knows isn't good for either of us, and it's time we had a talk.

Owen bursts onto the Seattle Grace scene way back at the beginning of season five, as an ex-army doctor who quickly becomes romantically involved with Cristina Yang. Teddy follows not long after, showing up in season six as Owen's best friend from the army who's always carried a not-so-secret torch for her comrade in arms. For years we've watched Teddy pine quietly on the sidelines as Owen falls in and out of love with other women. He has held her in a perpetual orbit, exerting just enough of his own gravity that she can't break free, but never so much of a pull that she can actually land.

Now, after half a dozen seasons away, Teddy is back and pregnant with Owen's baby after an ill-considered over-nighter to Germany. However, despite their one-time hookup, the relationship between the two remains mostly platonic. After realizing in Germany that she is still not his top priority, even when he is supposedly choosing her, Teddy moves on from Owen and begins dating Tom Koracick. Meanwhile, Owen is trying to make it work with ex-wife Amelia until the midway point of season 15.

Related:
There May Be Sad News Ahead For This Grey's Anatomy Couple

While Owen and Amelia's latest split comes as no surprise to anyone who's been paying attention to Owen's romantic endeavors over the past 10 seasons, Teddy seems to finally be in a good place with Tom. Not only does he bring her french fries at the end of a hard day, take her for mani-pedis on Valentine's Day, and look at her like she should be on display in the Louvre, but he also just gets her.

Back in season eight, Teddy abruptly loses her husband, Henry. They hadn't been married for long, but it is still a devastating loss, and we never really get to see Teddy process her grief long-term, since Owen fires her at the end of the season so she'll move to Germany. (He swears it is "for her own good," but . . . is it? Is it really?)

Meanwhile, Tom reveals to April Kepner in season 14 that at some point in the past, he lost his 10-year-old son and his marriage fell apart shortly thereafter. It's not that these losses are equivocal, or that individuals who have suffered a great loss can only ever find love with someone else who's been through a similar experience. It's more that for these two characters specifically, it seems to benefit them to be with someone who understands. Tom is kinder, gentler, and more attentive with Teddy than he is with any other character on the show, and Teddy has been glowing in a way that has nothing to do with pregnancy. 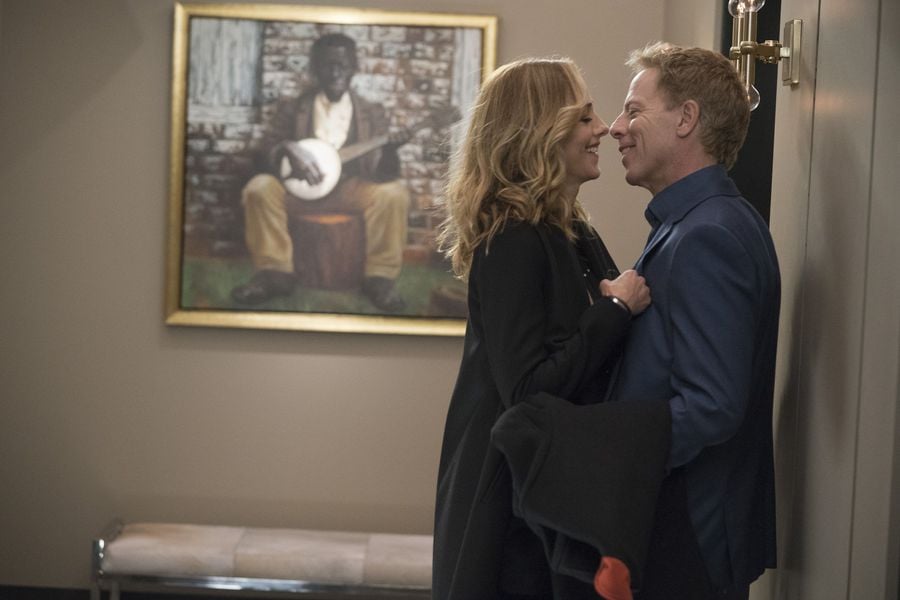 In episode 18, Tom tells Owen that Teddy "deserves to be with someone for whom she is the first and only choice," and he's right. We've seen Teddy be someone's first pick precisely two times on this show, and both of those times are the happiest and healthiest we've ever seen her. One would think Owen would be happy for her. She's his "best friend" and the mother of his child. He's shown her time and time again that he doesn't want to pursue a romantic relationship with her, but he still cares about her. He should want her to be happy, and in a healthy relationship with someone she loves, and who loves her. Right? Wrong.

It doesn't seem to matter to him that this is the guy Teddy has chosen, that he makes her happy, that he's supportive of her pregnancy, or that Teddy has requested that Owen treat him nicely.

Instead of being supportive of his "Person," Owen reacts horribly to her relationship with Tom, picking fights, purposely finding ways to exclude Tom from baby-related activities, and just generally being a jerk whenever Tom is around. It doesn't seem to matter to him that this is the guy Teddy has chosen, that he makes her happy, that he's supportive of her pregnancy, or that Teddy has requested that Owen treat him nicely. Just like when he fires her back at the end of season eight, Owen has decided that he knows what's best for Teddy and won't hear any arguments to the contrary.

It would be one thing if Tom were actually bad for Teddy. If he were harming her in some way, either physically or emotionally, it would be reasonable for Owen, as her best friend, to attempt to intervene and break them up. But on Grey's Anatomy, it has always been Owen, not Tom, who is toxic to the people around him. He's the one who constantly guilts Cristina for her decision not to have children — a decision he knew about before they got married, only to reveal once they'd tied the knot that he'd just assumed she'd change her mind — and cheats on her because of it. He's the one who keeps referring to Amelia's drug addiction as a "choice" and offers her practically no support when she is dealing with her brain tumor. He's the one whose anger, jealousy, and tendency to hold a grudge lead to the dissolution of both his marriages. He's the one who's been critical of every relationship Teddy has had and decision she has made for a decade, providing a constant barrage of criticism disguised as love that has consistently hammered away at her self-esteem. 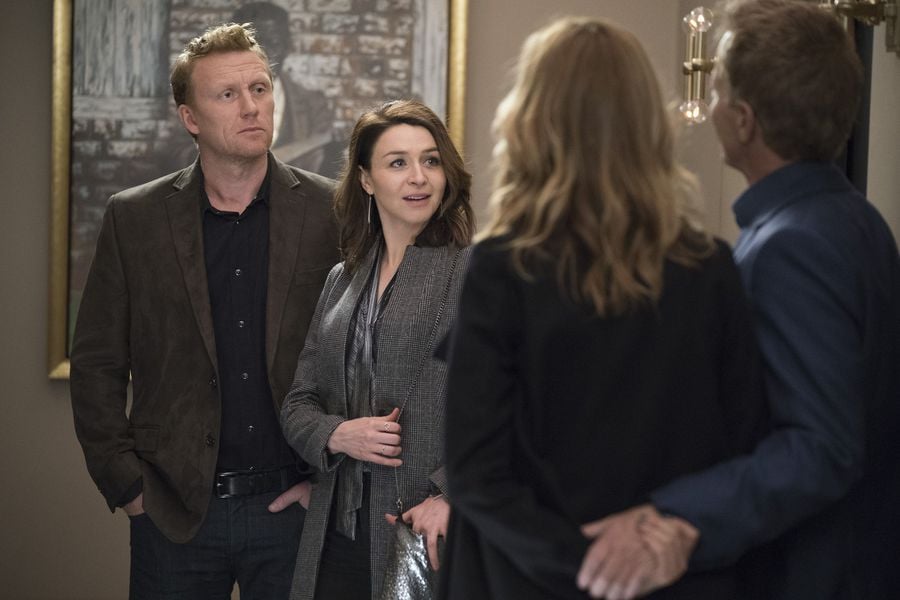 And yet, Grey's Anatomy has spent multiple episodes of season 15 trying to convince us that Owen and Teddy belong together. Amelia and Owen's sister Megan — the two characters who ostensibly should know him better than anyone in the world — have each given multiple speeches arguing that Teddy and Owen are endgame and that Tom should just give up, because what he's offering her pales in comparison to the love she could experience with Owen.

On a show that has historically done an excellent job of empowering women, it's appalling that Grey's Anatomy keeps making the argument that Owen is somehow the best that Teddy can do. That Teddy can't be trusted to make her own choices, and that the man who loves her for who she is and treats her well is somehow inferior to the man who has always second-guessed her and taken her for granted. That what she truly deserves is someone who has been borderline abusive in every previous relationship he's had and — aside from a single, reluctant therapy session — shows no signs of changing now.

Owen needs to do some significant work on himself before he has any business being in a romantic relationship again. He needs to learn how to curb his jealousy and communicate openly, to take responsibility for his actions, own his shortcomings, and view his partner as she is, and not as he wishes she would be.

This sort of work takes time, and by the time he's finally in a good place — if he ever is — Teddy may not be available, and that's a good thing. She's already waited for him for far too long, to her own detriment. It's time for her to move on and embrace a life that does not revolve around Owen, free of judgment from Owen, Amelia, Megan, and everyone else at Grey Sloan. And whether that life is with Tom, someone else, or no one should be entirely up to her.

As the father of her child, Owen will always be in her life, and hopefully, he will eventually learn to be the kind of friend Teddy deserves. After all, he is, and has always been, her Person. Let that be enough.