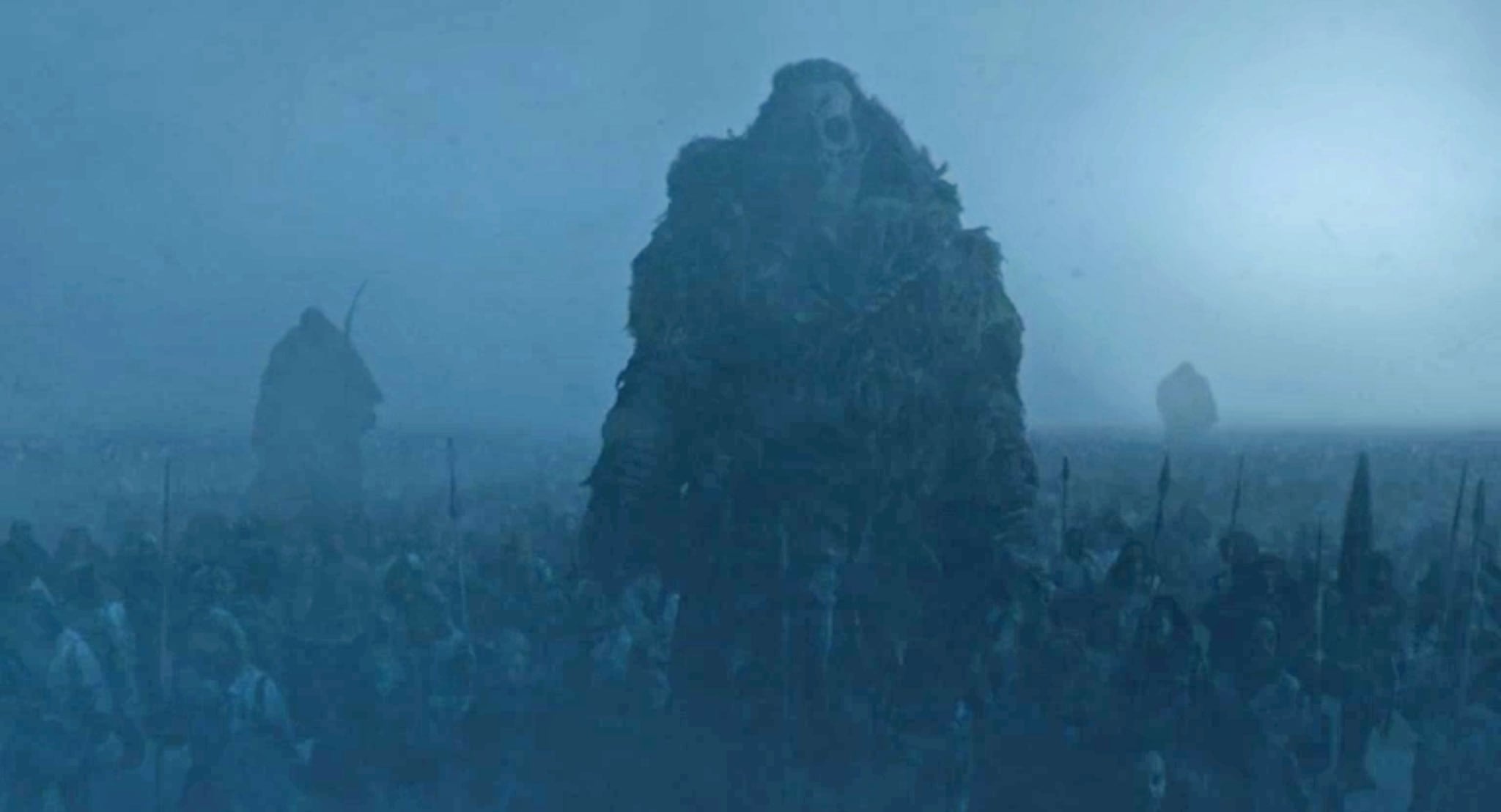 The season seven premiere of Game of Thrones opens with a one-two punch of shocks: first, Arya murders basically everyone in House Frey, and secondly, we get an ominous shot of the Night's King's army. Sure, we've seen the latter before, but this time it seems the White Walkers have recruited three extraspecial (and extratall) soldiers: giants.

Although you can see three giants total, the camera's deliberate focus on one giant in particular has fans of the show wondering if it could be Wun Wun (neé Wun Weg Wun Dar Wun), the Free Folk giant who dies in the penultimate episode of season six.

In said episode, "Battle of the Bastards," Wun Wun fights valiantly alongside Jon Snow against Ramsay Bolton's forces. He's with the brooding hero all the way until the end, when he helps break down the door of Winterfell and storms the castle. Sadly, he sacrifices himself so that Jon can get inside, getting hit with multiple arrows on all sides. Ramsay is the one who ends Wun Wun's life, shooting a fatal arrow through the giant's right eye, which happens to be the same glowing blue eye that the show zooms in on during the White Walker scene in season seven. The scene then directly cuts to a close-up of Bran, loosely implying he might be warging into the giant.

Related:
Game of Thrones: The Key Differences Between White Walkers and Wights 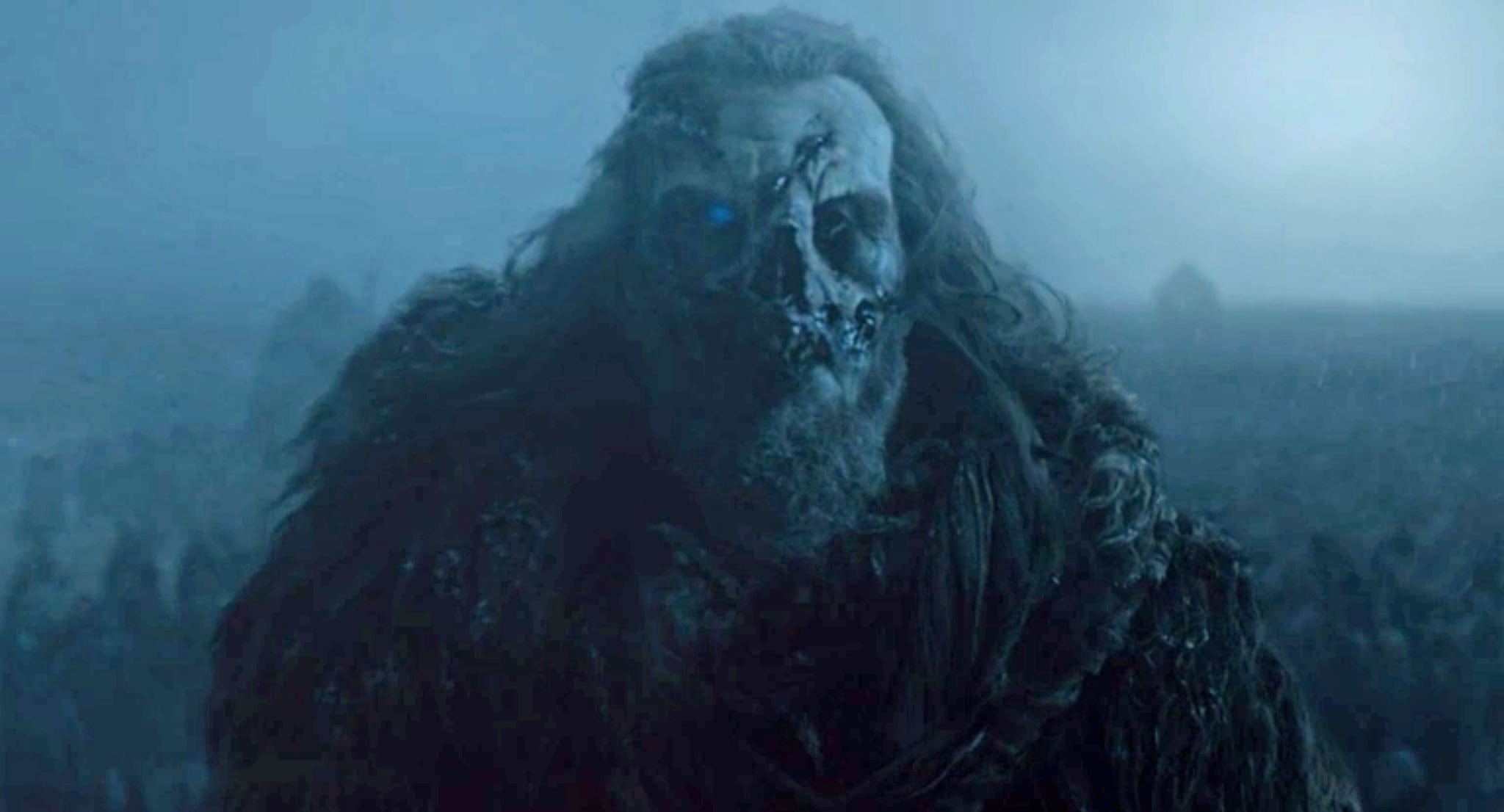 Since most of the giant wight's face has disintegrated past recognition, it's tough to make a definitive claim one way or the other. The emphasis on his eye is certainly telling, as is his long dark hair, but there are a few things to consider. One, how did the Night's King get his hands on Wun Wun's body? He dies at Winterfell, so unless a bunch of his Wildling pals carried his body back across the Wall and into White Walker territory, it's highly unlikely he's been transformed into an XXL wight.

Additionally, it would be incredibly stupid on Jon and the rest of the Wildlings' part to leave their dead just lying around after the Battle of the Bastards. They, more than anyone else in Westeros, have seen what can happen to a body that isn't burned, and it's hard to believe they'd take that chance. Between Littlefinger's schemes and Cersei's new spot on the Iron Throne, the last thing Jon needs is a giant zombie chowing down on him, you know?

Of course, this is Game of Thrones; crazier things have happened. If the giant wight does end up being Wun Wun, it would be especially tragic given how we're first introduced to the character. Back in season five, Jon Snow and the Night's Watch travel to Hardhome, a tiny Free Folk fishing outpost, to try and convince the Wildlings to help their cause and accompany them back to Castle Black. Wun Wun is one of the villagers there, and when the White Walker army arrives and the epic Battle of Hardhome breaks out, his help in literally ripping apart the frozen enemies is key to Jon and the rest of the Wildlings' escape.

Wun Wun or no Wun Wun, the important thing to take away from knowing the White Walkers have giants is the fact they'll be able to put up that much more of a fight in the battle against Daenerys Targaryen's dragons, should that ever come to pass.