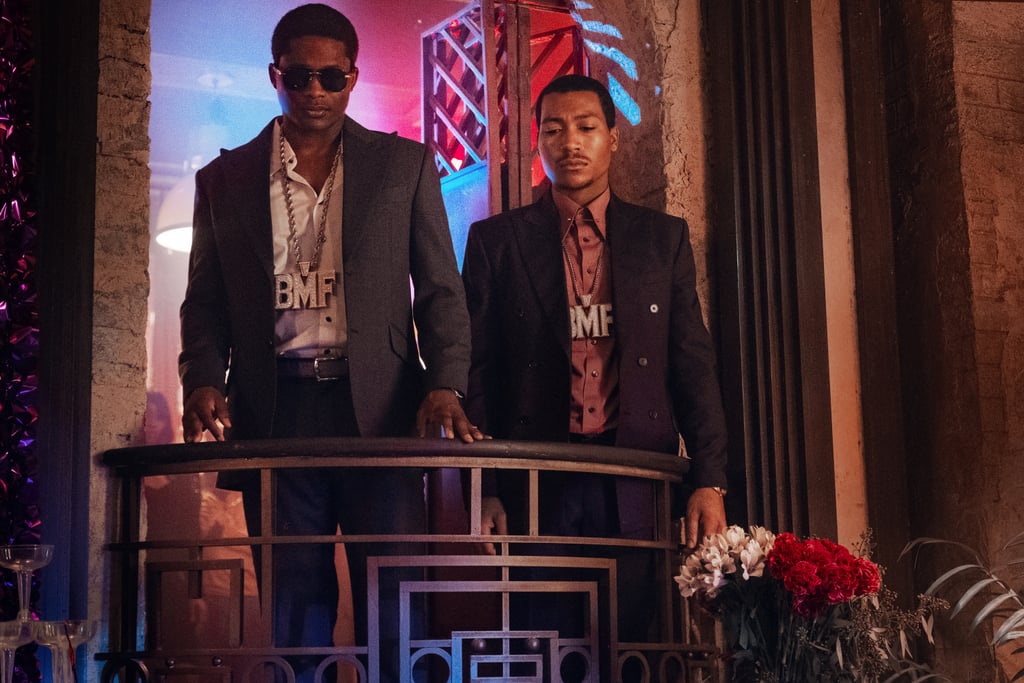 "BMF" returns for another explosive season next year, and the stakes are much higher this time as the Flenory brothers and their operation move down to Atlanta. We last saw Meech (Demetrius "Lil Meech" Flenory Jr.) and Terry (Da'Vinchi) slowly drifting apart as heat from law enforcement closes in on their drug business in the season one finale. And things don't seem to get any easier as the two encounter a whole new set of problems in season two.

"Expanding beyond Detroit to Lansing, Ohio, and even the South, the brothers face nearly insurmountable obstacles, are confronted with a shocking discovery about a member of their own crew, and battle for every inch of territory," season two's logline reads. In a previous interview with POPSUGAR, Flenory Jr. said season two is "really just going to blow the audience away." "I can tell you that [Big Meech] has to elevate his mind," he added. "Everything about him is elevating, so he's becoming bigger, wealthier, [and] wiser."

Per "BMF"'s season two trailer, which arrived on Nov. 25, Big Meech is planning a nationwide takeover as he officially establishes his reformed crew as the infamous Black Mafia Family. But his mindset and business aren't the only things we'll see change in season two. Following the Flenory family drama that unraveled in season one, this season will surely dig into their fallout as Meech and Terry follow their own pursuits — as well as a new love interest for the latter, aka LaLa's Markisha Taylor.

In an October interview with Entertainment Tonight, Russell Hornsby — who portrays the Flenory family's patriarch, Charles — said of season two: "We'll see how the Flenory brothers' actions affect the relationship between [wife] Lucille and Charles . . . drama at its best!"

Ahead of "BMF" season two, Starz released a documentary titled "The BMF Documentary: Blowing Money Fast," an eight-part event that began Oct. 23, detailing the true story that inspired the hit crime drama, as told by former members, insiders, associates, and celebrities close to the family. Come January, viewers will get to see how the real-life events match up to "BMF"'s dramatized retelling as the story continues.

Read ahead for everything we know about "BMF" season two, including its premiere date, trailer, and new and returning cast.

Gossip Girl
The "Gossip Girl" Cast on Monet's Mean Girl Takeover in Season 2: "[She] Really Has Her Time to Shine"
by Njera Perkins 8 hours ago