High School Musical: The Musical: The Series is closing the curtain on season one, and it's a wild ride. The finale, which aired on Jan. 10, is jam-packed with nostalgia as the students at East High put on their very own production of High School Musical, but it also includes plenty of drama (on and off the stage). Ricky and Nini profess their love for each other, Gina might be returning to East High after all, and Big Red and Ashlyn finally solidify their romance.

With all the twists and cliffhangers, we already have tons of questions about what's to come. Thankfully, the Disney+ series has already been renewed for season two, so we won't have to wait too long for answers. In the meantime, we went straight to the source to chat with showrunner Tim Federle on everything from the Nini/Ricky/Gina love triangle to how the second season will operate now that it won't be centered on a High School Musical production. 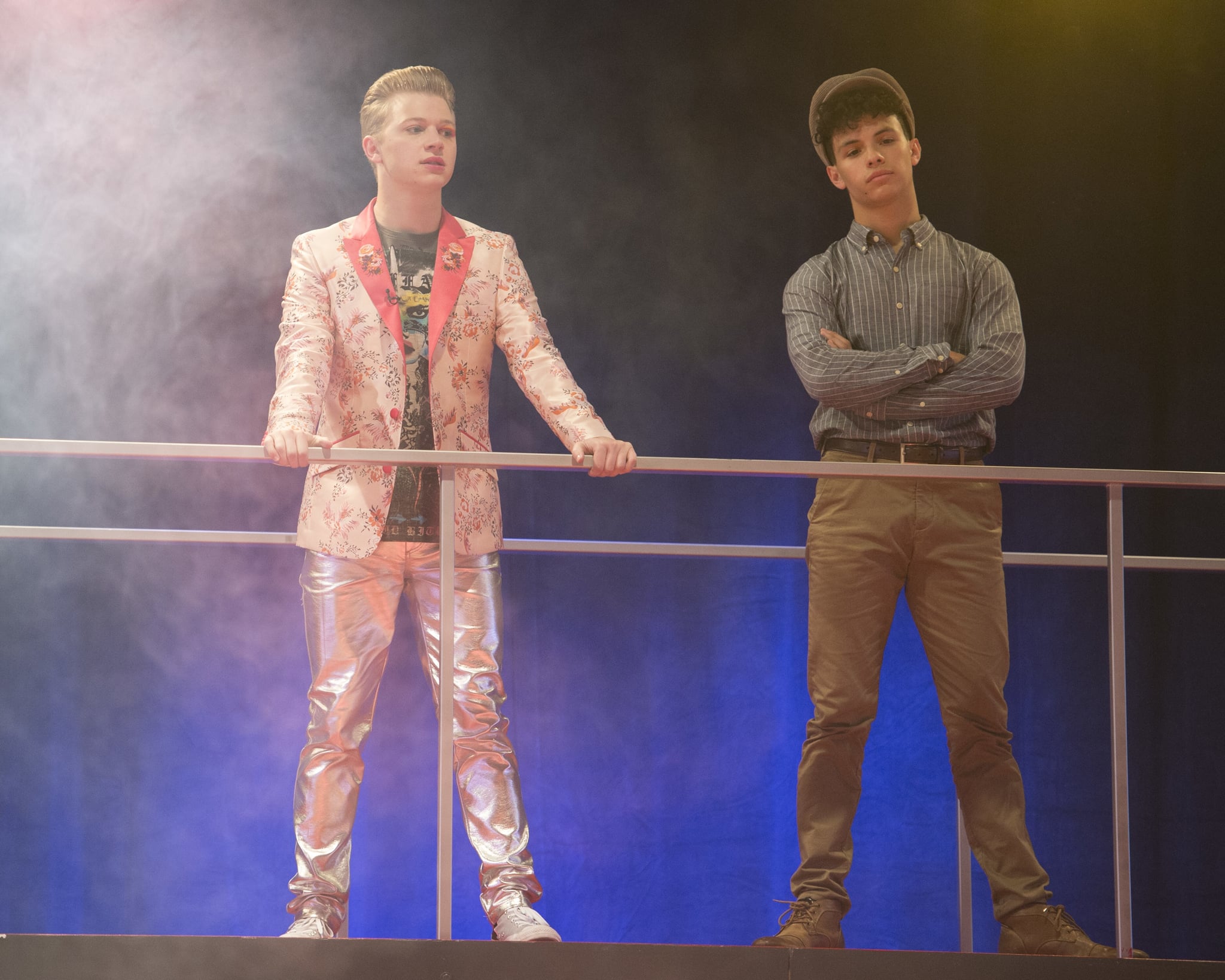 POPSUGAR: These past two episodes were so fun to watch, especially for me as an OG HSM fan. What for you was your favorite number from the original movie to recreate for the series?

Tim Federle: I don't love choosing my favorite child, but I will say like what I love about "Status Quo" is that it's my favorite song from the original. In fact, in episode three, when Miss Jenn walks in on the kids rehearsing it, the reason we did that new arrangement that goes a cappella is because I think there's something "holy" [laughs] to me about that entire line, "Oh no, no, no." It's like a glorious musical theater hook. Also, in "Status Quo," frankly, just the extraordinary honor of pitching this audacious idea to Disney, which is a boy playing Sharpay. Disney not only didn't blink, they said we love it. To watch somebody like Joe Serafini, who a year ago was an unknown, under-the-radar college kid, who is now already stepping into a role where I can see him become an instant role model is extraordinarily moving to me. Because if you can't recreate Ashley Tisdale, then what you have to do is pay tribute to her and say, we're going to grab the baton, it's the next generation's turn. I'm deeply proud of him for that.

PS: How did you go about making sure that the show paid tribute to the original, but also had your own unique spin?

TF: Number one was we burned down the theater in episode seven going into eight so that I could throw the whole thing into the gym. Because the gym at East High, it's like the Eiffel Tower in Paris. It's the place where they shot the original "Get'cha Head in the Game" and "We're All in This Together," so I really wanted to get us into that space.

Number two, I'm a theater person and rule number one anytime you do a revival of something is: why? Why are you doing it? Why are you doing a brand new Gypsy? And the answer is because Bernadette Peters now wants to play Mama Rose. So, when it came to how we approached the show, I wanted to put it through the lens of a high school theater teacher who had big ideas and yet at the same time ground it in some of that "not great high school acting." That is what makes it so charming because the message I say to the kids in the show all the time and to young people I've mentored over the years is you might not all become Broadway stars, but you can learn how to act like a star and be a gracious costar and be a good person if you just follow the rules of theater. That's what I wanted to show on opening night, which is like the hyper awkward scene of EJ and Ricky walking in place in front of the locker. The other way to do it is just to blow everything out of the water and something about it needed to be grounded in a high school space. 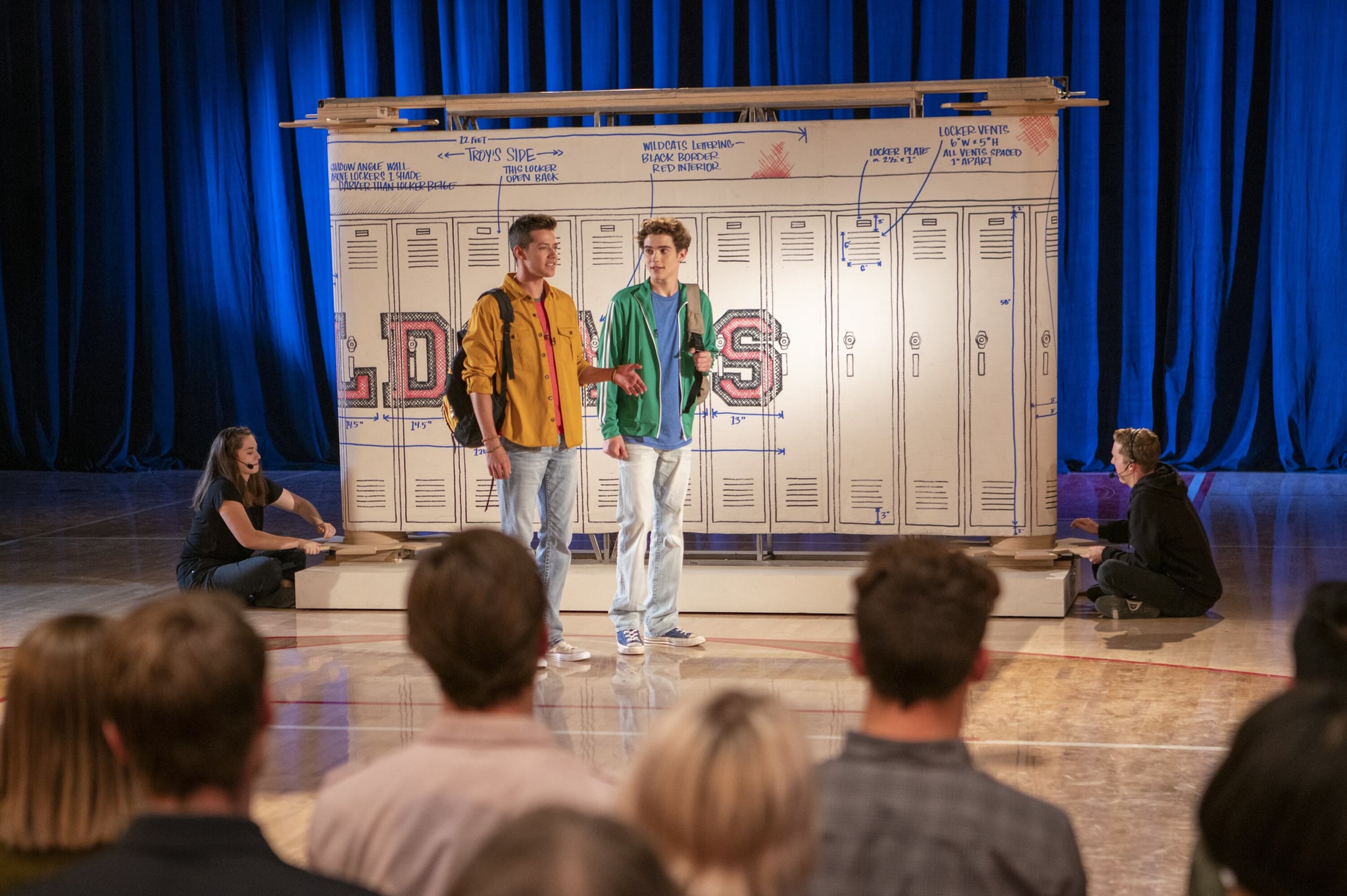 PS: There are quite a few big twists in the finale. Did you already know that you had season two when you were filming this?

TF: No, I didn't, and some of that was audacious. In fact, I'll tell you, Larry Saperstein does this tap dance over the credits, and that was one of the first things I knew we would do all season once he was cast. It would be the last moment in the entire season. I remember writing into the final script in the stage directions, "Where did that come from? It turns out all of these kids have so much talent, I could barely fit it into season one . . ." And I was basically on the page saying to my executives at Disney, please give me some more episodes because there are so many more stories and songs and journeys to take these people. And to my delight, they did.

PS: Things are left pretty open-ended with Sofia Wylie and Olivia Rodrigo's characters, specifically. What can you kind of tease about those storylines? Can you confirm that they're coming back for season?

TF: Yeah, I mean I don't know if Disney is ever going to do the giant rollout of announcing the season two cast. I could say it's impossible for me at this point to imagine doing the show without Olivia and Sofia. But just like Sofia as Gina disappeared in episode eight from season one, I think there's lots of ways to surprise the audience with the ways people come and go in this show. Frankly in life, when I was in high school, I lost friends all the time, either because they changed peer groups or they left town. I think that that isn't actually a spoiler at all about these characters in particular. It's just the high school experience of the way people come and go and grow and change. PS: Speaking of Gina and Nini, there's been a lot of talk on social media about the Gina/Ricky/Nini love triangle with various fans shipping various couples. We know in the finale that Ricky and Nini get back together, but is the love triangle officially over? Would you say that it's too soon for fans to declare one couple endgame over the other?

TF: To me, it's too soon to sort of declare anything about the show. I mean, I grew up with Dawson's Creek, so I guess my non-spoiler way of answering that is I look to TV history and storytelling tradition to say not only how do I get the most seasons, but how do I surprise audience members with who they're going to ship? To what you said, I remember when Gina kissed Ricky's cheek at the end of the homecoming episode. The initial reaction was like, he better not fall for Gina. And literally one episode later, half the internet erupted with like, Gina and Ricky for life. So, I think what I would mostly ask the audience to do is A: patience grasshopper. These things will unfold and probably surprise you. And B: always remember the actors themselves do not write the roles and don't confuse the actors with the characters.

TF: I knew as soon as the show was announced that there would be an immediate reaction, which is: "I can't believe they're doing High School Musical again. Why remake my childhood?" A perfectly natural reaction. To expand my show and not keep it stuck sort of flexing its own muscles and being so self-referential to the originals, one of the things I look forward to doing is expanding the world of the musical. I think some of the confidence I've gotten from that is watching something like an Olivia Rodrigo original song, written by an actual 16-year-old girl, be the number two viral trending song on Spotify. When I look at that, I go, you know what? I love those original High School Musical songs, I love our covers, but audiences know the real thing when they hear it. And Olivia and this cast is the real thing. And that's why my responsibility as a storyteller today is not to pat myself on the back and look to the past, but rather to look at my cast and say, you are the future. Let's sing these songs together. PS: How do you foresee the show continuing down the long haul, even past season two? Would the general concept of the show be like a new musical production each season that they're putting on?

"We will always be a group of Wildcats at East High."

TF: I mean, when you said it, it sounded smart. I don't know yet. I know that it's called High School Musical and I think that when I've seen fan speculation that says, "How on earth are they going to keep this going?" I just smile. Because I'm like, "Oh, don't worry, there's a plan for everything." I mean, I like a crazy person sat down at the Disney Channel offices a year and a half ago and said, "Go with me on this. I think the show has seven seasons." Then everybody laughed and then they hired me. I don't know if I'm going to get seven seasons. It's audacious and crazy. I sort of said it because I didn't think I'd even get the job. It's my first TV show. But one of the exciting things about actors like this, who I think are so lovable and easy to love in the show, is that they are truly flexible actors. Somebody like Sofia Wylie, who just turned 16, has the depth and the range that's just natural to her. She can play villain, she can play heartthrob, and she can play a vulnerable girl. When you have all of those tools in your toolbox, and literally every one of my series regulars does, then my job is less, "Oh my gosh, how am I going to come up with stories?" and more, "Oh my gosh, how am I going to get enough sleep to keep telling these stories?"

Will there still be nods to the High School Musical franchise when the show's not centered around high school musical production anymore?

TF: I think we will always be a group of Wildcats at East High. I do not think the spirit of the way I want to keep telling these stories is one where there's a Zac Efron joke every three pages. First of all, because I think you can only go to that well so many times before it dries up. And second of all, because to my great delight, while I think we have a bunch of closet fans from the original franchise who said they wouldn't watch it, probably tuned in and realize like, "Oh, I love this. It's actually brand new and it celebrates my childhood instead of ruining it." The truth is I don't think what the show is ultimately built on is the strength of those wonderful three movies. I think it's built on this new generation of actors.