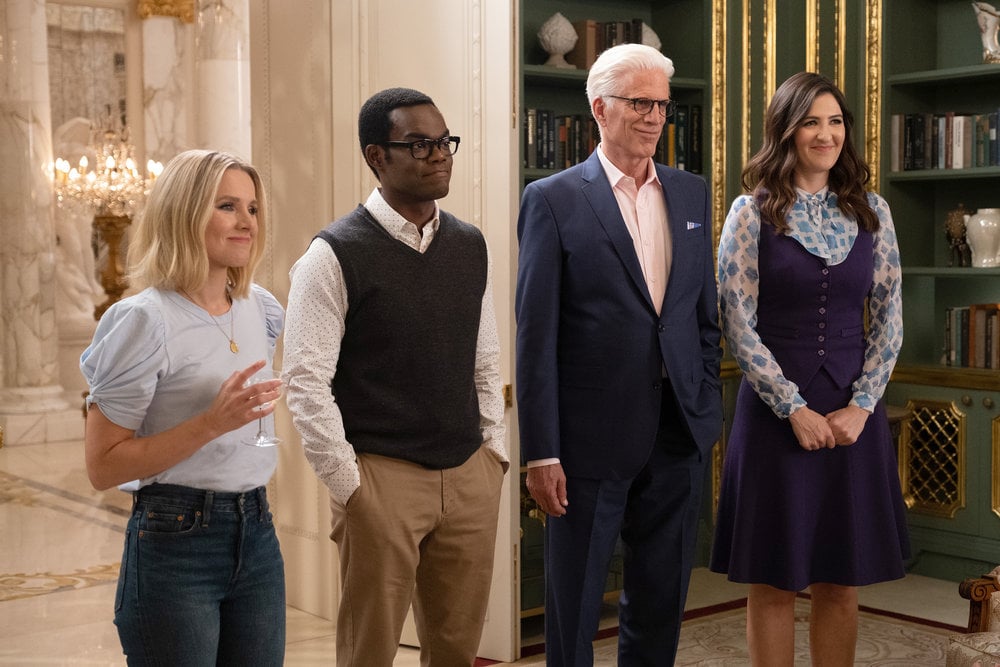 After four seasons of debating life, death, and the in-between, The Good Place came to an emotional end on Jan. 30. The core team — Eleanor, Chidi, Tahani, Jason, Michael, and Janet — had already fixed the afterlife system, gotten into the real Good Place, and fixed that system, too, so what could possibly come to happen on the series finale? Lots of tears, as it turns out. Here's how things wrapped up for our favorite humans, demons, and not-a-girl.

Related:
20+ Times The Good Place Cast Hung Out IRL, Proving We're Not in the Bad Place

Eleanor, Chidi, Jason, and Tahani Move on From The Good Place

As the penultimate episode seemed to suggest, the final episode of The Good Place is about each of the characters living out their time in the Good Place and then, ultimately, moving on to a final, permanent peace. It's somehow surprising and not surprising at all that the first character to reach peace is Jason. After he achieves his great accomplishment (playing a perfect game of Madden in the Jacksonville Jaguars' stadium with his favorite QB as his avatar), he realizes that he's ready to pass through the doorway to the end of existence altogether. He throws a farewell party and makes a "J+J" necklace for Janet so she won't forget him. Although he loses the necklace before he can give it to her, she promises him that she experiences time differently, so technically, she'll never be without him. Of course, this is Jason we're talking about, so although it appears he goes through the archway, he actually doesn't: he finds the necklace in his pocket after Janet has already left him, then spends several thousand Bearimys waiting for her to come back, during which time he meditates and basically becomes a Buddhist monk after all. After meeting her one more time, he heads through the doorway to whatever lies beyond.

Tahani reunites with her parents (and sister) in the afterlife, but after she achieves everything on her extremely long to-do list, she feels she's ready to move on. In the end, though, she makes an unconventional decision: she wants to continue to have a purpose, so instead of walking through the archway, she convinces Michael and the other architects to let her train and become an afterlife architect. Michael even gifts her a peacock bowtie as a good-luck present!

When Chidi realizes it's time to move on, though, things are a little bit trickier, because Eleanor is definitely not ready to go yet. She tries to get him to stay, first by enlisting Janet's help to take Chidi on an ongoing series of "perfect" trips, and then by openly pleading with him not to leave her. Although he agrees, she realizes quickly that he's not happy, and she proves her mastery of the ethics he taught her by telling him it's okay for him to go. They share a last sunset together, and Chidi explains one theory of how this whole cessation-of-existence thing works: "Picture a wave in the ocean: you can see it, measure it, its height, the way the sunlight refracts . . . and then it crashes on the shore and then it's gone. But the water is still there. The wave was just a different way for the water to be for a little while. That's one conception of death for a Buddhist. The wave returns to the ocean, where it came from, and where it's supposed to be." Eleanor asks him to say goodbye now and leave before she wakes up, and he obliges, leaving behind a goofy "beefcake" calendar of himself for her.

Related:
The Good Place Cast Has Some Forking Terrific Roles Lined Up After the Show Ends

Michael Gets His Wish

Without Chidi, Eleanor eventually decides she wants to try to go through the door, but she can't make herself do it. Eleanor realizes that maybe she still has something left to do, and that's why she's not ready to move on yet. She decides to visit Mindy, who is still stubbornly living in her personal Medium Place, and tries to convince her that it's worth the effort to learn to care about people and to try to make it into the Good Place. Eventually, Eleanor is successful, and Tahani eases Mindy's nerves about her "test" by promising to design Mindy's test scenario personally. But Eleanor still feels like there's something else to do before she passes though the archway.

Michael, meanwhile, has the opposite problem as he is ready to leave the Good Place: he can go through, but it has no effect on him because he's not human. After thousands of Bearimys of being an architect, Michael is tired and devastated that he'll never get a chance at eternal peace. That's where Eleanor swoops in. She goes to the Judge and convinces her to grant Michael's greatest wish to be human. Eleanor and Janet give him the news. He can go to Earth and live out the rest of his "life" as a human, gathering points, then dying and going through the system of tests, the Good Place, and the final doorway just like everyone else. Michael accepts, and after a tearful goodbye with Janet, he steps through the door to Earth and settles down in Arizona (of course), where he makes friends, learns to play guitar, and gets a Great Dane who he names Jason (and gives a bowtie collar).

We Get to See What's Beyond the Good Place

After helping Mindy and Michael, Eleanor sits on a bench with Janet and reflects on her journey. Finally, she bids Janet goodbye and heads through the doorway. This time, we get to see what happens when someone goes through, and it finally reveals The Good Place's ultimate theory of life and death.

Eleanor dissolves into tiny, glowing, golden bits of light, which scatter throughout the universe seemingly turning into good deeds. One of those bits of light lands on a random guy on Earth who's about to throw out a piece of mail he got by accident. When Eleanor's light bumps into him, though, he decides instead to deliver it to his neighbor, who turns out to be Michael. So in the end, Chidi was right: the "energy" of everyone who moves on becomes part of the universe at large, inspiring a tiny bit more kindness at every turn.