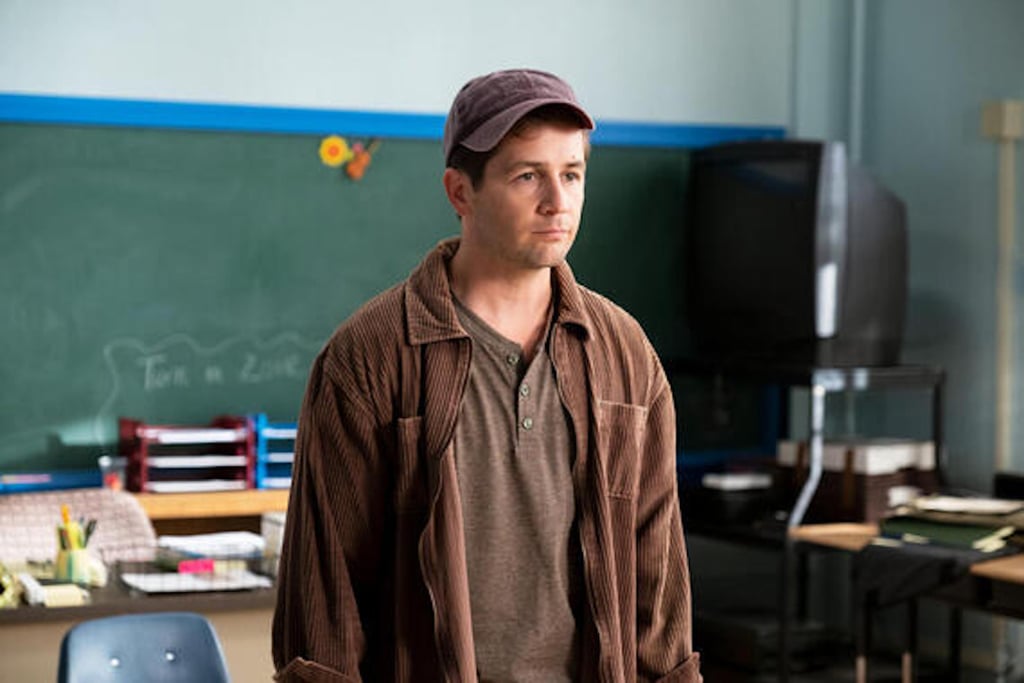 ICYMI, the PEN15 cast is crazy close in real life. No, seriously — cocreators and main stars Maya Erskine and Anna Konkle share a tight bond that rivals that of Maya Ishii-Peters and Anna Kone (perhaps minus the cheesy friendship necklaces though). Erskine's onscreen mom, Yuki, is portrayed by her actual mother, Mutsuko Erskine. And, as I discovered while binge-watching season two, the middle school drama teacher is played by none other than Michael Angarano, aka Erskine's boyfriend. How cute is that?

During the sixth episode of season two, we meet Angarano as Greg Rosso, the dad-sneakers-sporting director of the school play and a lover of the words "real" and "honest." Maya is cast in a lead role of said play, meaning Erskine shares a handful of hilarious scenes with her offscreen partner. Honestly, I just want to know how Angarano managed to keep a straight face and stay in character while watching his girlfriend wear a mushroom-like wig and pretend to flirt with an actor half her age. It's a true testament to his acting skills, which he's been honing since he was a young kid. Angarano has starred in a slew of shows and movies through the years, including Sky High (yep, he's Will Stronghold!), I'm Dying Up Here, Will & Grace, Cover Me, The English Teacher, and, most recently, This Is Us, on which he portrayed Jack's younger brother, Nicky. Talk about range!

While celebrating the release of season two's first seven episodes, Angarano shared a sweet message on Instagram. "i watched season 1 as a fan and fell in love with the show, then fell in love with @mayaerskine as a person in real life, and then was lucky enough to watch and be apart of season 2, he wrote, adding, "i can't wait to watch and fall in love all over again." It's unclear exactly when he and Erskine first started dating, but they made things Instagram official in September 2019, a few months after PEN15 nabbed its season-two renewal. Since then, they've shared a boatload of sweet moments together, which you can admire ahead after seeing Angarano in action as Greg on PEN15.

Gossip Girl
The "Gossip Girl" Cast on Monet's Mean Girl Takeover in Season 2: "[She] Really Has Her Time to Shine"
by Njera Perkins 17 minutes ago