Tim Ford Jr. thought he was in for a sweet (literally) moment with his 5-month-old son, Tim Ford III, aka T3, when he opened up a strawberry ice pop and could see that his boy wanted in on the action. Because T3's a baby and ice pops are sugary, Tim allowed his son to have just a small lick of the frozen treat to taste it, but oh man, a lick was all this baby needed to realize that food is one of life's greatest joys.

"Man he was too serious! 😂 what a blessing," Tim captioned the video, which he shared on Instagram back in November 2019. In an interview with Today, Tim said: "The funniest thing about the entire video was that he really tried to forcefully snatch the ice pop away from me. I didn't realize he was that strong." 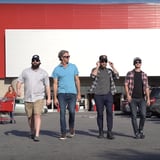 Watch the video above to see T3's hilarious reaction.