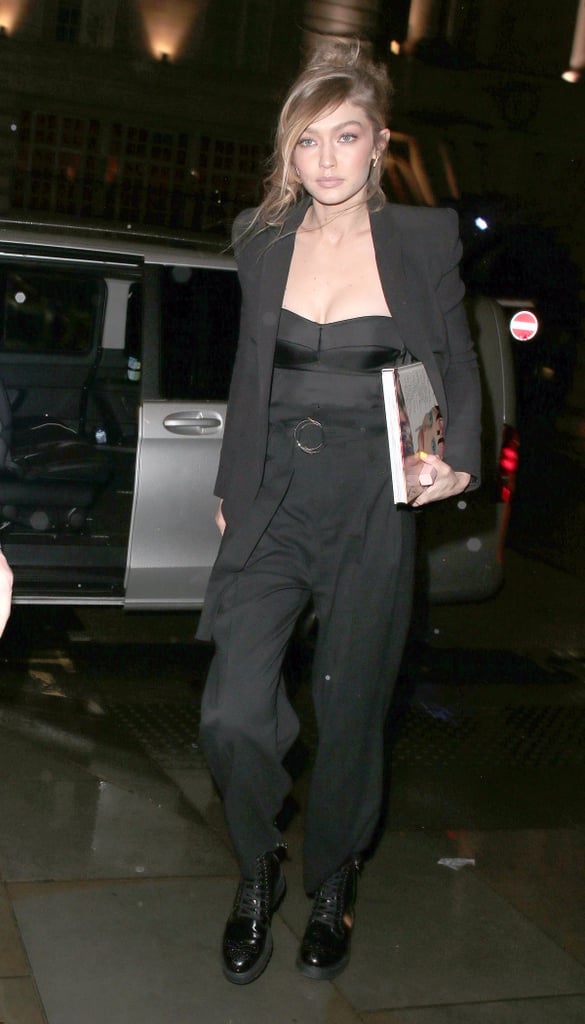 Gigi Hadid Stood All Day in Heels, Then Brought Out Her Comfy Nighttime Shoes

When stars like Gigi Hadid have a jam-packed press day, you can always count on them to do an outfit change or two. The model touched down in London wearing this radiant yellow Ralph Lauren ensemble for her Maybelline launch. She spent the day in heels before switching into something much comfier at night: a pair of combat boots. The edgy shoe was part of her head-to-toe black look consisting of a corset top, pants, and a duster coat.

She wore the outfit to a British Vogue party in honor of its December issue and was even spotted carrying a copy of the magazine. The dark outfit was a complete 180 from her previous sunny ensemble, though we're not completely surprised she chose to end the day in combat boots. It seems like every model packs a pair for traveling, all based on comfort. Read on for another look, then scoop up some of your own.

Related:
Gigi Hadid's Outfits Then Are Simply Not the Same as Her Outfits Now
Previous Next Start Slideshow
Gigi HadidTrendsBootsFall FashionCelebrity StyleModelsShoppingCelebrity Street StyleGet The LookShoes

Tina Fey
Everything We Know About Tina Fey's Golden Globes Hosting Outfit(s), Straight From Her Stylist
by Sarah Wasilak 21 hours ago