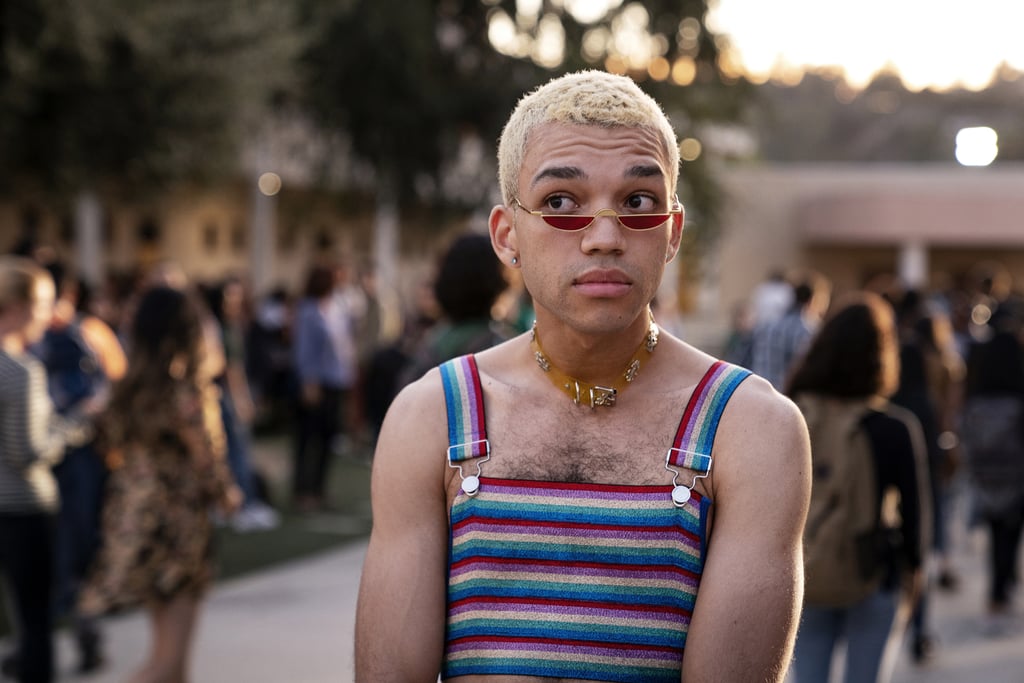 You're watching HBO Max's Generation, right? Of course you are. The Daniel and Zelda Barnz directed show follows high school students exploring their sexuality and expressing themselves largely through what they wear. Chester is played by Justice Smith, who you might recognize from Paper Towns and 2020's All the Bright Places, in which he starred alongside Elle Fanning.

The 25-year old actor brings his character to life with the help of costume designer Shirley Kurata, who's behind projects like Selena Gomez's recent "De Una Vez" video. Kurata is an expert at curating wardrobes, which becomes clear as soon as you see how much stuff Chester wears, and he's just one of the seven core kids the series follows. But Kurata accurately describes Chester as the rainbow unicorn of the show. He's inspired by 19-year-old Zelda Barnz's real life classmate, so his mood board started there, but also takes influence from Jaden Smith, Ezra Miller, Harry Styles, and the queens of RuPaul's Drag Race — specifically Yvie Oddly.

"His character doesn't come from a lot of money, but he is smart and resourceful and can make his outfits look great without spending a lot."

Even though shopping was tough during the pandemic (episodes are being filmed from September 2020 to present day), Kurata went online to thrift, mostly from the women's section, at local vintage shops, Depop, Etsy, Dolls Kill, and ASOS, stores Kurata felt like Chester would probably have his eyes on, along with eBay and Crossroads. "His character doesn't come from a lot of money, but he is smart and resourceful and can make his outfits look great without spending a lot," she told POPSUGAR, confirming that she was also sure to mix in LGBTQ+ sources such as L.A.G. vintage, anti-waste, gender-free label Official Rebrand, and musician/artist Seth Bogart's brand Wacky Wacko.

Kurata and Justice collaborated on the character completely. "Justice definitely played a part in how Chester would look. We would discuss what look would be appropriate for each scene — whether it would be a bit more masc-presenting or more gender-bending. We would collectively decide on what jewelry he would wear and how much he would wear," Kurata said. Ahead, the talented stylist shares behind-the-scenes fitting photos of Justice as Chester, which provide a sneak peek at the outfits we'll see him in soon, along with everything you'd ever want to know about how Chester's traumas and experiences impact who he is and what he wears. And yes, the iconic rainbow crop top from episode one is involved, because we know you can't get enough of it.