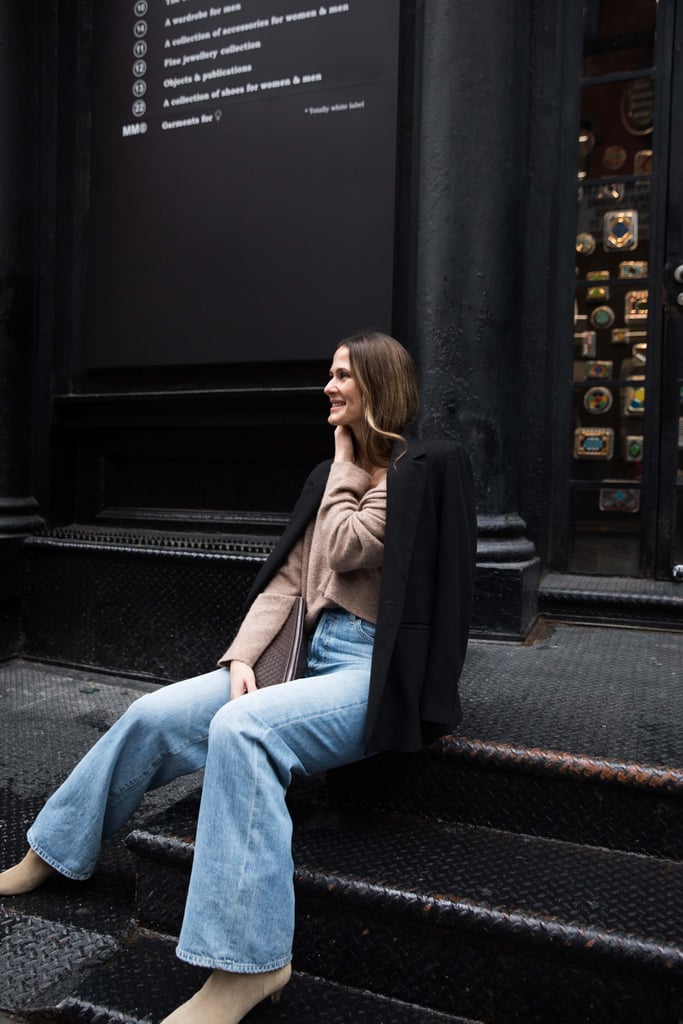 I Stopped Caring About My Fashion Week Outfits, and That's Precisely When They Got Good

For the last 10 years of my life, I've covered Fashion Week every season and attended New York runway events countless times. If you're wondering if it gets any less exciting, it doesn't. For me, it is still a true joy to be in a room filled with other fashion-obsessed writers, editors, and buyers and glance across the room to see Anna Wintour staring back in her sunglasses. I remember sitting in an empty room at Lincoln Center a good 20 minutes ahead of the Rebecca Minkoff show in 2011 — if you've ever been to a runway show, you know I may as well have brought a sleeping bag and a stack of unread New Yorkers to plow through, because no show actually ever starts on time. In fact, most usually proceed a good 40 minutes later than planned. Still, I couldn't stay away. It felt like I had won the lottery when my editor gave me a ticket to that first show, and I only wanted to be in that room, soaking up every part of the process.

I've spent so much of my life cataloguing how an outfit will be received by others that I've lost the joy in dressing for myself.

I love it. Yet something inevitably creeps into my psyche as each Fashion Week looms, edging out every bit of confidence and inspiring self-doubt (and even fear). This is the part I hate. Packing for the week is initially exciting, the way choosing an outfit for the first day of sixth grade was. But the panic is not. My childhood self would have jumped at the chance to design an outfit for the occasion, but I've spent too many seasons standing over my suitcase half-dressed, in a sweat, clothes thrown around my hotel room to see only the unbridled joy in it. There's also the peer pressure; wondering who will wear what and how you'll be judged by what you're wearing (or in turn, not wearing). On so many occasions, I've left my hotel for one show feeling good about a look, only to catch a glimpse of another outfit in the front row and begin to spiral. I've spent cab rides back to my room metaphorically peeling off the layers of a "failed" outfit, cursing the choice under my breath like I was being graded for it. Disaster.

The thing is, no one actually cared — that is, no one but me. And therein lies the problem. I've spent so much of my life cataloguing how an outfit will be received by others that I've lost the joy in dressing for myself. This past season, I promised myself I wouldn't get caught up in it and decided to take the KonMari approach to dressing for Fashion Week. To paraphrase the brilliant Marie Kondo: if it doesn't spark joy, don't wear it. Instead of pressure, I relished in possibility.

I live in San Francisco, where the fashion is more utilitarian — people dressed to go to work, to workout, to hike. As a woman in San Francisco who loves fashion, I often succumb to sweatpants and leggings, adopting the "easy" uniform of the city lest I stick out like Crocs at Couture Week (or in this case, couture at a Crocs convention). I won't blame it entirely on my surroundings; I'll own up to the fact that there are days when I'm lazy and uninspired, and leggings and a sweater or jeans and flats seems like just enough of an effort to get me out the door feeling OK, but no, not great, about my outfit.

But this Fashion Week in New York City presented the possibility to do it differently, because yes, Fashion Week inherently pushes us to dress up and to take risks, but also because while dressing up in San Francisco will get you noticed, even going next to naked at New York Fashion Week isn't likely to cause much of a reaction. Take perennial fashion icon Carrie Bradshaw: while her style was influenced by trends and boyfriends, the biggest influence on her style may have just been NYC itself. She knew it better than any of us — anything goes in New York (anything, running the gamut from plumage attached to the bottom of a miniskirt like a bunny tail to a belt fastened around a bare torso). That's doubly true of Fashion Week. So, why get bogged down by what other people think? The only person I was dressing for this time around was myself, and maybe also New York.

I found joy in comfortable clothes, in neutral color combinations, in building an outfit around a pair of really good boots. There was no outfit formula, save for one essential constant: I really had to like it.

Emboldened by the anonymity of being in the Big Apple with style as wildly diverse as its residents — and plenty of SATC reruns — I packed my luggage thinking only of which outfits would make me happy to wear them. Would I pack my comfiest jeans (even if they weren't decidedly on trend)? Sure. On the flip side, would I finally have it in me to wear the bralette and cardigan sweater set, à la Katie Holmes, that had been collecting dust (tags still on!) in my closet? Abso-f*ckin-lutely.

And I did. I wore them all, and more so, I wore them happily. There were moments when a glimpse at the #newBottega dotting the streets made me weak, but I didn't hate what I was wearing. I appreciated the style around me without taking it as a personal assault on my own. Where I had once found failure and doubt, I embraced creativity. I layered and belted and repurposed clothing I loved and wanted to find new ways to wear, or fell in love with clothes I got to try on for the very first time. I found joy in comfortable clothes, in neutral color combinations, in building an outfit around a pair of really good boots. There was no outfit formula, save for one essential constant: I really had to like it.

Back home in San Francisco, I dug into the depths of my closet to unearth a pair of long lost heels I was once afraid would attract too much attention "if everyone else was just wearing yoga pants." I wouldn't be the person "just wearing" something; I'd be the person who was wearing something that felt special. And I liked that person. It was liberating. I freed myself from the expectation of others, and in turn, my outfits got better . . . or, maybe I just thought they did. Does it make a difference? I'll leave you with this: if we decide we're only dressing for ourselves, our opinion is the only one that matters.

Street Style
The Top 8 Street Style Trends of the Season, as Seen on Fashion Editors
by Mekita Rivas 1 day ago