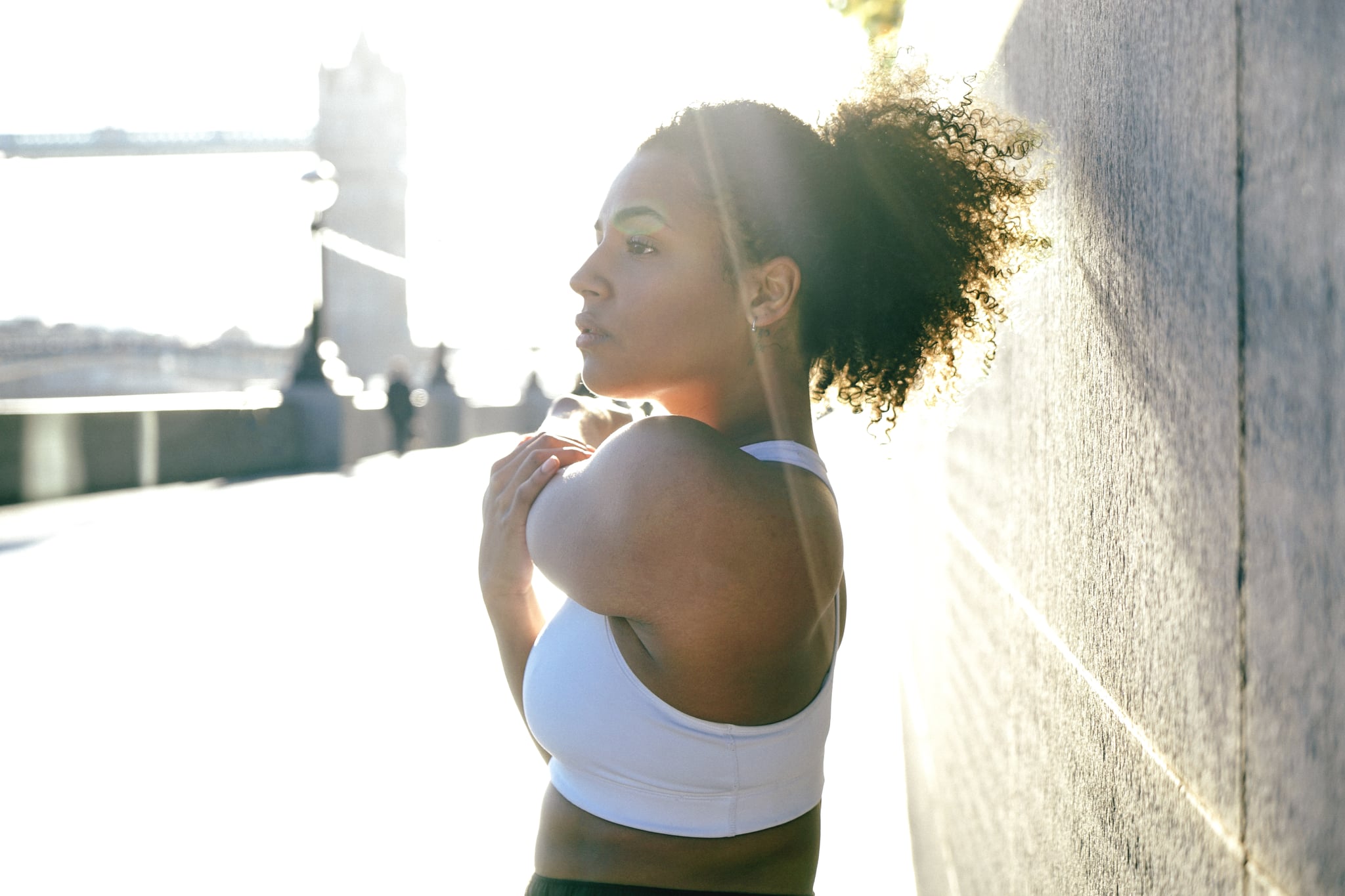 I got a concussion from a refrigerator a few weeks ago. Now, I won't get into the gritty details — it's just your typical story of what happens when you put your lunch away on the bottom shelf, only to stand up too fast and slam the top of your head — but I'm happy to report that I'm back to normal.

The one thing that I wasn't quite sure about postconcussion was when it was safe to start running, squatting, and doing ab circuits that set my core on fire again. I did a bunch of walking the first week or two, relied on bodyweight exercises and low-impact lifting, and waited three weeks before I did a full run on the treadmill. But, was I being too cautious? After speaking to Dennis Cardone, DO, sports medicine specialist and codirector of the NYU Langone Concussion Center, it turns out that yes, yes I was.

First, What Is a Concussion?

About two-thirds of the center's patients sustain a concussion from non-sports-related injuries, according to the website, which made me feel better about my own injury. If you think of the brain like jello, when a concussion occurs, it moves rapidly back and forth in this finite space after a direct hit to the head, or hit to any part of the body, Dr. Cardone explained. As a result, the brain makes contact with the skull and causes bruising, which normally isn't severe enough to see on an MRI or CT scan, he said. Changes to the brain also occur at a cellular level during a concussion. Fortunately, it's an "acute reversible injury to the brain," meaning that you're typically expected to make a complete recovery.

What Are the Signs of a Concussion?

The main takeaway about concussions is that they're all unique, Dr. Cardone said, so one person's symptoms may be very different from another person's. However, typical symptoms at the time of injury that could persist include headache, difficulty concentrating, feeling in a fog, and sensitivity to light and noise. Other common symptoms, at the time of injury, are dizziness, nausea and vomiting, trouble balancing, and acting more emotional, but he said those don't normally persist.

Related:
Emilia Clarke Opens Up About Experiencing 2 Brain Aneurysms in Her 20s

According to Dr. Cardone, there isn't a sure correlation between the signs and symptoms and the severity of a concussion (meaning, the amount of time it takes for you to recover). For instance, loss of consciousness doesn't necessarily indicate that a concussion is severe. In fact, most people — about 90 percent, he said — will not black out. He noted, though, that some professionals will say that loss of consciousness greater than 30 seconds or a minute might indicate that it's a severe case, adding that we still don't understand concussions well enough to make this judgment. "Some people may not even realize that they have a concussion until maybe hours later, the next day, or a couple of days later when they're still kind of feeling these symptoms," Dr. Cardone said.

How Are Concussions Treated?

It's a misconception that people need to be holed up in a dark room to recover. "What's very new over the past two to three years is that we no longer cocoon anyone with a concussion and say that they need to be at complete rest," Dr. Cardone said. In terms of being on a computer (which can aggravate your symptoms) or going back to work, it's all a gradual return depending on your symptoms. But, he advised against completely avoiding these things; you can use how you're feeling as a guide.

How Soon Can You Work Out After a Concussion?

To my surprise, there's good news. Dr. Cardone said that usually after 48 hours — which gives symptoms a chance to subside a bit — it's recommended that people start doing light aerobic activity. This means, "some activity at a low aerobic rate and at a level that won't irritate their symptoms," he clarified. You can go for a walk or get on a stationary bike at a low pace with low resistance, he suggested. This can actually help improve symptoms and aid recovery because of increased blood flow to the brain. It specifically helps other processes such as healing of the autonomic nervous system, which regulates involuntary functions like heart rate and digestion, that are affected during a concussion, he explained.

Related:
A 4-Week Beginner's Program to Get Back in Shape and Build Muscle

Dr. Cardone said that the NYU Langone Concussion Center will have someone exercise until they get symptomatic, and this becomes their threshold. Then, the center establishes a certain heart rate or effort the person can exert and, each week, they work their way up. If you go too hard, this can aggravate your symptoms, he noted. Of course, it depends on how you're feeling, but gradually going back to exercise is ultimately good for recovery. Here are some guidelines that Dr. Cardone gave for working out 48 hours post concussion:

In terms of progression, everyone is different, Dr. Cardone said. One person might be able to progress very quickly, but, generally, most people will do a week of light aerobic activity and up the intensity from there. Recovery typically lasts within 10 to 14 days, he explained. When it comes down to it, symptoms really are the best guide.

A Note on Kids and Concussions

Dr. Cardone said that evidence shows kids are slower to recover from concussions, so the younger the child, the longer it may take to get back to normal and the more conservative doctors may be. As someone ages, their healing process is a bit more predictable and quick, and he stressed that medical professionals should really be cautious with anyone who is in middle school and younger because they need to go slow with their recovery. You can read more about kids and concussions here and on the CDC website.

Health
Is LASIK Safe? Here's What You Need to Know
by Lacey Muinos 5 days ago