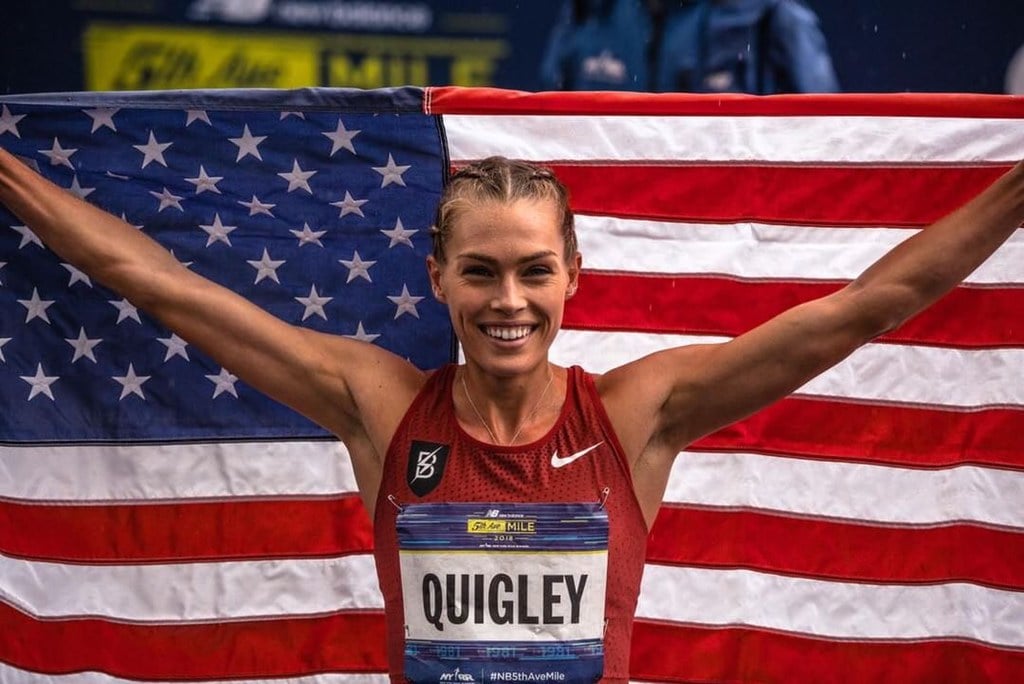 When I spoke with Colleen Quigley on the phone, she reminded me what it sounds like to be in love with a sport, not because she raves about her running career, but because of the dedication in her voice when she talks about working through rough parts of training. Colleen is a 2016 Olympian, having finished eighth in the 3,000-meter steeplechase in Rio. Just this past February, she won her first US title as the USATF Indoor Mile Champion with a time of 4:29.47. She's a 2020 Olympic hopeful, currently training in Portland at the Bowerman Track Club, and, out of our entire conversation, I was most excited to ask her about how she gets through those tough spots in workouts where you just want to quit. (Been there, do not enjoy that.)

Colleen has endured a few injuries in the past — plantar fasciitis and a hamstring injury, to name a few — and writes in detail about them on her website (just this week, she disclosed via Instagram that her Achilles is giving her problems, but "I'm still working hard," she told us . . . athletes get injured; it happens). Being injured, Colleen said, can be lonely, but she always encourages people to remember that someone, somewhere out there is going through the same thing. And even when you're healthy again, the reality is that you'll have bad days in training.

Related:
I Tried Olympian Colleen Quigley's 5-Minute Ab Routine, and I Have 2 Words: Help Me

The main thing Colleen wants you to know is that, when you're struggling, you need to acknowledge that struggle or else you're just going to ruminate in it. A lot. Once you recognize how hard a workout is, it will become easier to overcome. Meditation, which she started a couple of years ago, has taught her the concept of simply being in the moment. "But being in whatever moment you're in isn't always a good place," Colleen admitted, "so it's not necessarily trying to act like you're happy when you're not; it's recognizing when you're angry, or just being with that feeling." Once you can identify the hard parts and sit with them, "it's amazing how it can kind of disappear," she said.

Colleen gives an example of this practice at work. "If I'm in a hard workout, say a five-mile tempo, and maybe I'm in the third mile where it feels like I'm so far from the finish but I'm starting to get really fatigued, I might get to that point where I just don't want to do this anymore," she said. "I can start feeling my anxiety levels rise and start to think, 'Am I going to make it to the finish?' Those negative thoughts start coming in, and one thing I've focused on lately is just recognizing it and saying, 'Yeah, this is uncomfortable. That's OK, it's supposed to be uncomfortable, it doesn't have to be easy all the time.'" Sure, some days it's easy, Colleen admitted, but some days you just have to accept the uncomfortable parts of a workout, and once you recognize that, "it doesn't feel so bad anymore."

Related:
We Asked 24 Fierce Females Why They Love Working Out, and the Answers Are SO Relatable

So the next time you're pushing through a particularly hard set or beginning to lose your breath during a treadmill run, Colleen wants you to tell yourself that it's not going to last forever. "This," she said, "helps me bring down my anxiety and focus on the lap that I'm doing or the mile that I'm currently on." Yes, by all means take a break if you need it, but know that sticking with your struggle can be done. And you don't need to be an Olympian to do it.

Workouts
What Happens If an Athlete Gets COVID at the Olympics? We Have the Answers
by Jenny Sugar 20 hours ago

Workouts
Are Crunches Straining Your Neck? Try One of These Ab Workouts Instead
by Emily Weaver 21 hours ago

Workouts
I, a 300-lb Woman, Tried Aerial Yoga — This Is What Went Down (Spoiler: Not Me!)
by Angelica Wilson 1 day ago

Workouts
Here Is Exactly How Long Your Jump Rope Should Be, According to a Trainer
by Brittany Natale 2 days ago