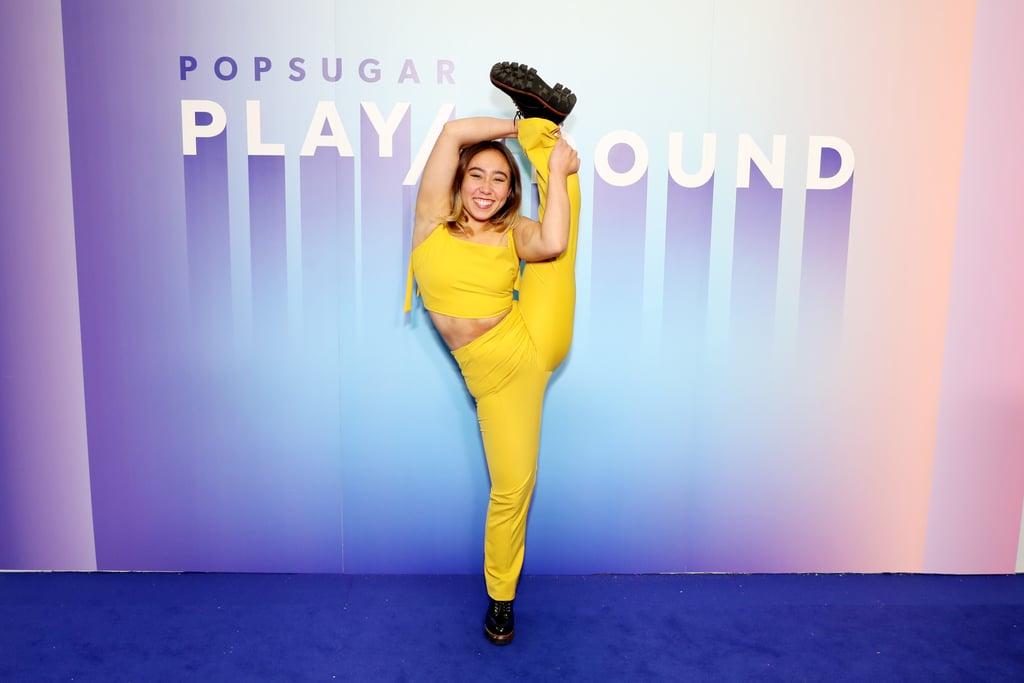 If anyone has had a whirlwind of a year it's Katelyn Ohashi. The former Olympic-bound gymnast who rose to internet fame with her viral floor routines at UCLA just graduated this Spring, and I sat down with Katelyn ahead of her POPSUGAR Play/Ground panel alongside Aija Mayrock to talk about life post college. There's a lot in store for her.

Despite the fact that she's known for her all-smiles performances on floor — she received six perfect 10s on floor this season alone — Katelyn is more than a highly skilled, highly inspiring gymnast. College taught her that. She came out of her shell and found herself during those four years on the UCLA gymnastics team, she told POPSUGAR — but, as we've written about in the past, this didn't happen right away. In fact, after stepping down from the elite level due to a back injury and emotional fatigue (she was body shamed at a young age), Katelyn wanted to be completely done with gymnastics.

She recalled that it took about one year, but she returned to the sport purely on her own terms once she realized that she missed it. "I switched teams and that coach was like, 'Katelyn, why don't you just try to at least go to college and get a scholarship for everything you worked for?'" And that's what she did. Even still, coach Valorie Kondos Field, known as "Miss Val," noticed that Katelyn didn't seem happy on the UCLA team.

"I thought I was happy coming to college, and then I realized how hard it was and how many invisible bags of baggage I was carrying and was holding me back," Katelyn said. "And I realized how much trauma I correlated with the sport. With college, I got to rebuild on my understanding of gymnastics." She admitted that discovering herself outside of the sport is what really helped her reconnect with the joy she had for it when she was little, because, "I had so much going for me outside of it that I didn't have to be that perfect gymnast, so when I stepped on the floor it was purely because I loved it and I wanted to."

Katelyn said she blossomed into herself starting around sophomore year. She learned that she's a "pretty natural leader" and found her voice. Writing has become her saving grace when she's going through rough patches (and if you read her blog, you'll see she's really good at it, too). She's into photography as well, and one of her goals is to publish a poetry book full of "pictures that depict the deeper meaning behind the words" in the near future. She's also interested in activism work to support people subject to domestic violence.

"Life is a series of choices, and the choices we make dictate the life we live."

On graduation day, Katelyn was extremely proud of her accomplishments and ready for the new chapter ahead. She has Miss Val to thank for a key piece of advice the now-retired coach gave the team: "Life is a series of choices, and the choices we make dictate the life we live." Katelyn said that she views this as, "negative and positive comments in our head can't coexist so we have to feed the positive voice." How does she feed that positive voice? Writing. Photography. Being this creative person outside of the flips, pointed toes, and stuck landings.

Though her gymnastics career has come to a close, you can watch Katelyn perform at the all-women's, multisport Aurora Games this August in Albany, NY. Katelyn said she's slated to compete on beam and floor during the Games and noted that it'll probably be the last time she's doing gymnastics. "I'm like, 'Surprise! I'm back!'"