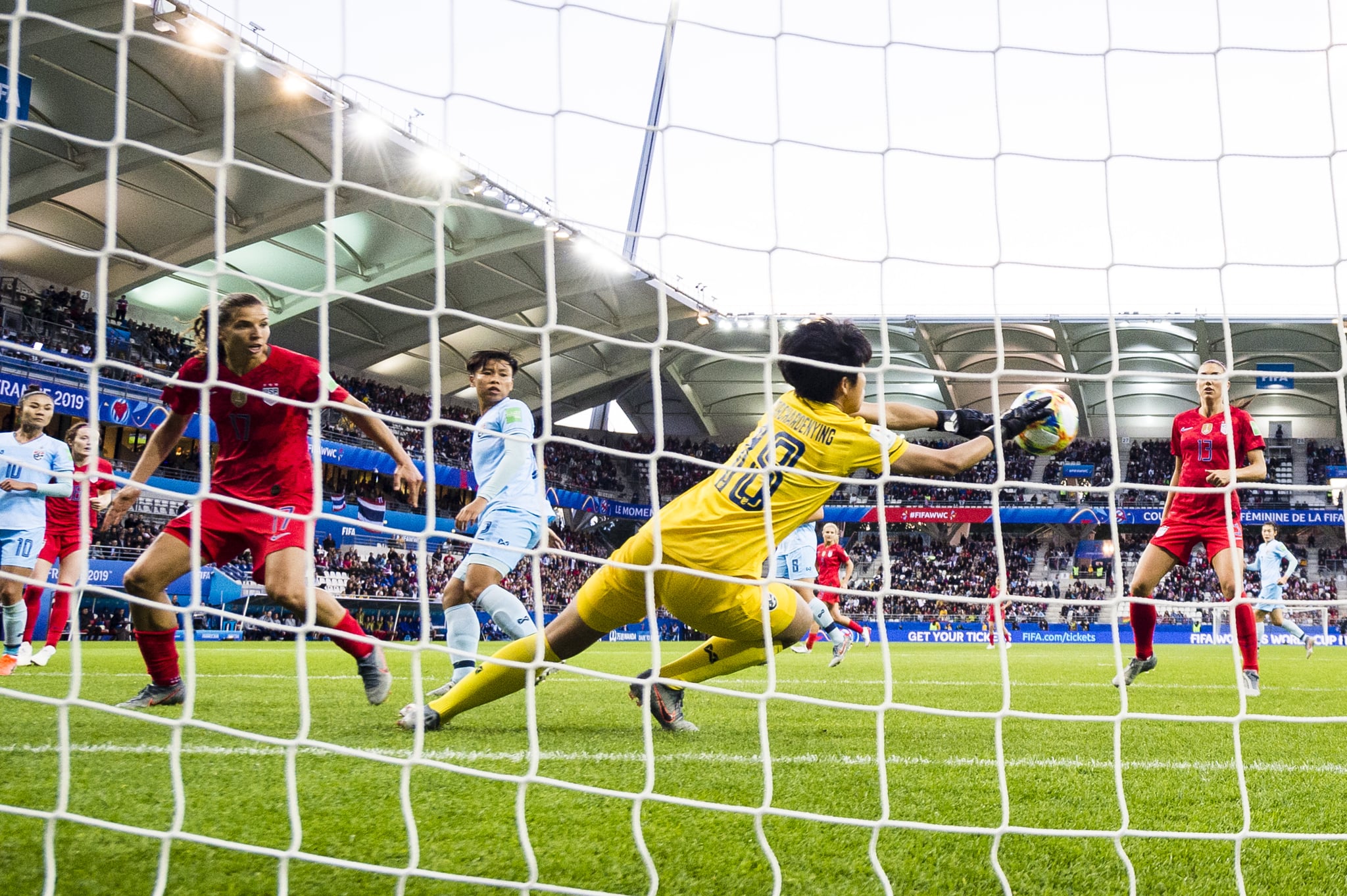 Thirteen goals. In case it wasn't already apparent, that's not normal. Not for soccer, in general; not for an international game, certainly; and never for a World Cup. When the US Women's National Soccer Team routed Thailand by that unprecedented margin, in a 13-0 shutout in their first game of the 2019 FIFA Women's World Cup, it stunned the sports world. The consensus was that everyone expected the top-ranked USWNT to beat Thailand, who are currently ranked 34th in the world, but no one expected a show like that.

The Thailand game has been the most dramatic blowout of the tournament so far, but it's far from the only one. Sweden defeated Thailand 5-1, Australia beat Jamaica 4-1, and France won the first game of the tournament 4-0 over South Korea, just to name a few. With one day and four games left in the group stage, already 15 matches of this Women's World Cup have been decided by two or more goals. The men's 2018 World Cup had 14 such games in their completed group stage, which included eight more teams and 24 more games than the women's.

Lopsided scorelines stand out in a sport that's notoriously low-scoring. That there have been so many comfortable wins already in this tournament, not to mention the outright blowouts, is something to pay attention to. In the furor following the USWNT's first victory, in all the quibbling over sportsmanship, celebrations, and mercy rules, the internet ignored (as it tends to do) the elephant in the room. The scoreline stood as a blunt and painful testament to the deep divide between the elites of women's soccer and the rest of the world. It made it plain that women's soccer and women's athletics in general remain an underfunded afterthought across most of the world.

The Struggle For Funding

The USWNT's struggles in this regard have been widely publicized. The team is suing U.S. Soccer for gender discrimination over the pay gap between their squad and the men's, despite outperforming the men in their respective tournaments and often playing more games than them as well.

As the World Cup goes on, more instances of disparity have come to light. The Chilean team, whose 3-0 loss to the US could well have been much worse if not for a spectacular goalkeeping performance, was dropped from FIFA's world rankings in 2016 because Chile's soccer federation had failed to schedule any matches for them for two full years. Players on many teams, including Thailand, hold down outside jobs. Twice, the Jamaican team's funding was cut altogether. Even the German team, second best in the world and the only team to win back-to-back Women's World Cups, struggles for respect in their soccer-obsessed country.

There is, first, the issue of history. Soccer has exploded in popularity over the last century, but until recently, women have been left out. That's due in no small part to the fact that, for almost 60 years, many women were outright banned — yes, as in, legally forbidden — from playing soccer at all. From 1921 to 1979, according to Google's Offside Museum on the history of women's soccer, the sport was barred for women in several major countries, including soccer powerhouses like Germany, France, England, and even Brazil. Generations of girls missed out on the athletic opportunities. By the time all the bans were lifted, in terms of development, women's soccer was essentially back to square one.

Title IX did some of the work of amending this. Passed in 1972, the US law forbade schools that received federal funding from discriminating on the basis of sex, effectively providing a legal mandate to field women's college sports teams. That law alone forcibly pushed the sport to a higher level. It spurred the creation of the first US Women's National Soccer Team in 1985. Six years later, they'd win the inaugural Women's World Cup.

NCAA-trained players continue to dominate the professional playing field even to this day, though it's clear that the US, the top-ranked team for 10 of the past 11 years, reaps the lion's share of the benefits. The US has a ways to go in giving its world-champion players the respect and financial support they deserve. But it is not a coincidence that a country with this kind of demonstrable structural support for its women's team is also consistently one of the most successful.

What do we learn? Given the resources and opportunities, even a nation that's notoriously indifferent to professional soccer can field a team of Women's World Cup champions. Three times over.

Related:
Before the 2019 Women's World Cup, Revisit the Biggest Moments in USWNT History

In an interview with Fox following the Thailand game, USWNT cocaptain Megan Rapinoe got to the heart of the issue. "If you want to talk about strengthening the game top to bottom, let's talk about FIFA. Is FIFA putting all the money that it can into all these federations leading up [to the World Cup]? I've heard stories that Chile only played a couple games in the last three years . . . I think it's on FIFA to invest a lot more money, and mandate to all these federations around the world to invest in their women's programs."

What Is Women's Soccer Worth?

Of course, there's the argument that women's teams don't generate the same amount of money as men's, and therefore shouldn't be invested in as heavily. At least in the US, that argument has holes. In the past three years, following their 2015 World Cup victory, the women's team has generated more game revenue (primarily made of ticket sales) than the men's team.

As for broadcast rights and sponsorship deals, another major revenue generator, US Soccer sells those as a bundle, not separately for the men's and women's teams. "That makes it difficult to parse the value that broadcasters or brands see in the men's team versus the women's team," The Wall Street Journal wrote. What we do know is that the 2015 Women's World Cup Final was the most-watched soccer game in American history, and if that's not an enormous selling point to sponsors and broadcasters, then what is?

As for the rest of the world: if the teams improve, fans will come; when the fans come, so does the viewership, and so does the money. For the teams to improve, though, there needs to be some start-up capital, whether that's from the countries or from FIFA. (And by the way, since when has FIFA, the governing body of the most popular sport in the world, not had plenty of money to throw around?)

Related:
FIFA Women's World Cup: These Are the 26 Players You Want to Keep Your Eyes On

A recent New York Times opinion piece made the case that a great sports game needs just three qualities: skilled players, tension over the outcome, and drama that builds and builds until the last moment. "Those are the kinds of games we hunger to see and the ones that enter into the history books. Whether they're played by men or women is neither here nor there."

Translation: 13-goal games are exciting, but it's the nail-biters that go down in history. The USWNT's legendary penalty kick victory in the 1999 World Cup Final, for example, is considered a watershed moment for women's sports. Interest has been growing ever since. By all rights, funding should follow: enough to even the playing field for the less-dominant nations, enough to make every stage of the World Cup as harrowing as the knockout rounds.

In the meantime, against all odds, teams are improving. Upsets are happening. Italy, who hadn't been to a Women's World Cup in 20 years, secured a spot in the Round of 16. Jamaica's recently penniless squad scored their first World Cup goal ever this year, against Australia. And, fresh off their huge loss, in a moment that won over viewers all over the world, so did Thailand. Imagine what we might see if these teams got the funding and support they deserved.

Healthy Living
Wondering How Much Blood You Lose During Your Period? Here’s Your Answer
by Victoria Moorhouse 2 minutes ago