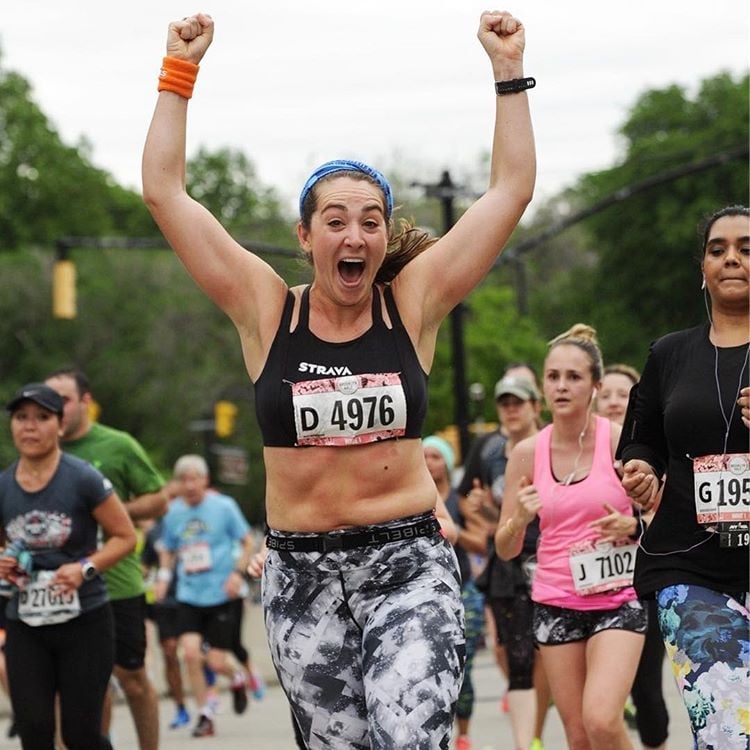 Kelly Roberts wasn't always a runner or confident in her body's strength. Despite being called hippo in school, Kelly never thought she was overweight — just "unconventionally skinny."

However, after her younger brother unexpectedly passed from acute alcohol poisoning at 16 years old, Kelly quickly gained over 75 pounds and realized that instead of extreme diets, she needed to focus on getting healthy. "I'd look at before and after pictures and feel a tidal wave of shame and regret because I knew that I'd never get my life back," Kelly told POPSUGAR. "I felt so ashamed and exposed. It took another three months before I decided to fight for my life back."

Kelly began running, and her first mile gradually progressed to her first race, where her joke of "hottie hunting" and taking selfies at each mile marker went viral. Behind the Run, Selfie, Repeat posts , her messages of facing your fears and pushing yourself not only resonated with other women but also began to inspire them. "It really wasn't until three years after I started running that I actually realized how warped my body image was, and I launched the #SportsBraSquad because I was tired of looking in the mirror and feeling ashamed of the body staring back at me," Kelly said.

Through this social-media movement, Kelly is encouraging her followers to embrace their bodies' strength and proudly work out in their sports bras. "Despite the fact that I ran a marathon in three hours and 41 minutes as a 160 pound US size 10 female, I never saw women who looked like me being portrayed as strong," she said. "I know I'm strong as hell because I worked my ass off to get to that finish line."

Yet, some people completely miss her empowering message and instead feel the need to shame Kelly for her body. "Every week, I field comments and emails from men (always men) shaming me or policing my weight," she said. "If you could see my inbox and some of the emails I get, you'd want to light things on fire."

Kelly decided to share on Instagram a particularly cruel (and unnecessary) message she's received along with her badass response to shed light on the horrible things that men feel entitled to say to women and to also inspire those who are hearing them. "I'm curious why you don't simply have the discipline to go on a diet and lose the excess fat you have?" the stranger wrote in an email, with "Dieting" as the subject. "Instead, you rather literally run away from your problems and act like losing a family member is the harshest thing on earth … Help me out here, what am I missing about this?" 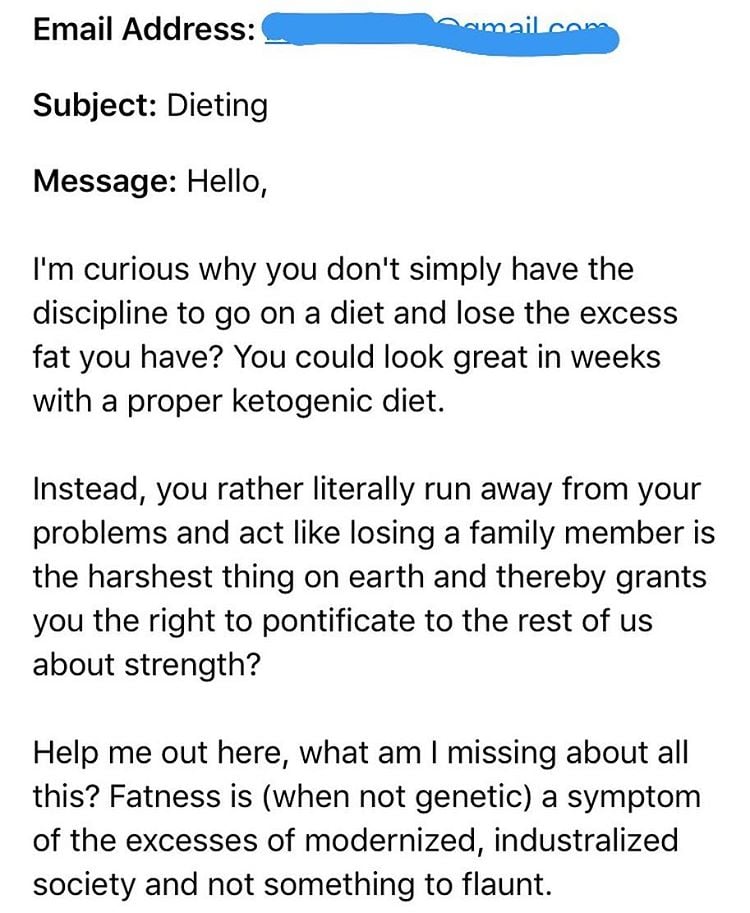 If Kelly had read something like this before she put in the time to build her confidence, she believes this stranger's words that said everything she used to tell herself would've destroyed her. Instead, she had an incredible response for him and everyone else to see:

Dear man who found it appropriate to send me this email,
Once upon a time, your words would have cut me like valyrian steel. Today? They remind me how important it is to change the way we see strength. Because what you call fat, I know can run a marathon in 3 hours in 41 minutes. I hope one day you can obtain the strength I've worked tirelessly for. Until then, know that I will spend the rest of my life empowering the women you hope to shame.

Kelly now knows that strength doesn't look a certain way and hopes that more people start to see it too. She learned that in order to be strong, part of the battle includes finding a physical activity you feel motivated to do, not focusing your workouts around just losing weight, and eating healthy. However, another key component of strength is building your self-confidence to see beauty when you look in the mirror. "But, if any of these guys ever wanted proof, I'd be happy to kick their ass during a marathon," she said. 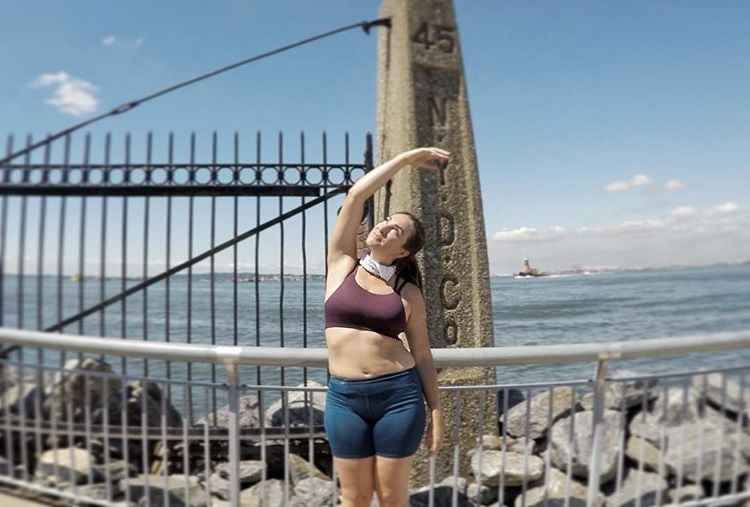 Health
Whoopi Goldberg Was Not Wearing a Fat Suit, but Honestly, Why Should It Matter?
by Melanie Whyte 22 hours ago 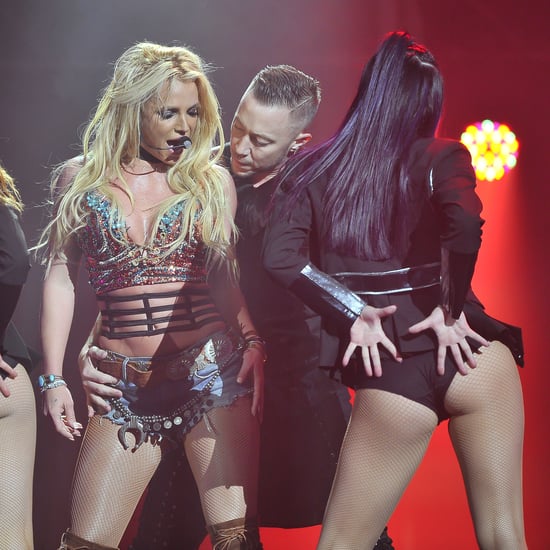 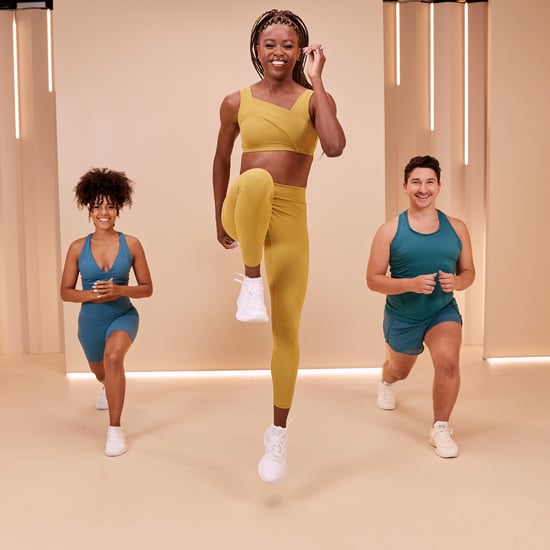