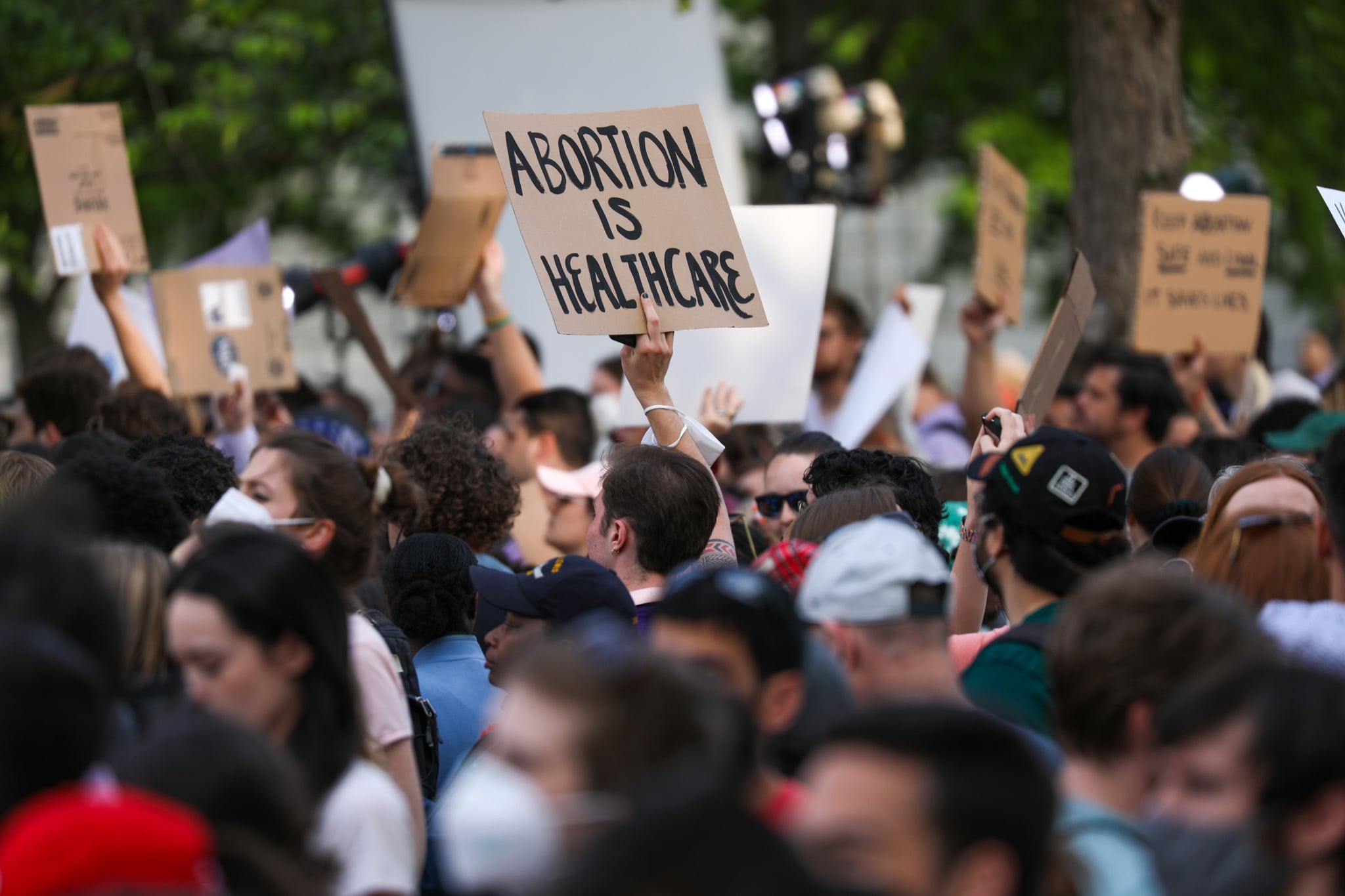 As news spread of the Supreme Court preparing to overturn Roe v. Wade, abortion activists took pains to make sure one message was clear: as of right now, abortions are still legal. The court's stance, as revealed in a leaked draft opinion published by Politico on May 2, is not yet an official ruling on Dobbs v. Jackson Women's Health. Until the court hands down an official ruling (which is expected within the next two months), abortion rights remain protected under the US Constitution.

Activists weren't so intent about spreading this message to give people hope, exactly. While there are things people can do to protect abortion rights — including donating to abortion funds (especially in states with trigger laws that would immediately ban or restrict abortion following a reversal of Roe v. Wade) and calling your local representatives (to encourage them to codify the right to choose in your state's constitution) — the harsh reality is that there isn't anything we can do to impact the court's decision now, says Lupe M. Rodríguez, executive director at the National Latina Institute For Reproductive Justice (also called the Latina Institute). Though the justices may change their votes before the ruling becomes official, the current ideological alignment (6-3 in favor of Republican-appointed justices) gives every indication that Roe v. Wade will be overturned.

For that reason, saying "abortion is still legal" isn't meant to rally people to speak up against the court, Rodríguez explains. Rather, it's crucial to emphasize that abortion is currently legal because people need to know that they can still seek abortions right now.

"We think it's really, really important for folks to know that this is not a final decision," she says. "While there's a strong signal that the Supreme Court will overturn Roe v. Wade, it hasn't done so yet, and we need folks to continue to . . . go and get the care they need and to know that they can do so legally."

Rodríguez emphasizes that even Roe v. Wade did not guarantee equal access to abortion for everyone, particularly when it comes to people of color and immigrant communities. There's a difference between access and legality, a distinction that affects more than abortion. The right to vote, for example, has been undermined by lack of access and voter suppression. Similarly, the right to abortion has been undermined by many things, including unnecessarily restrictive laws that prohibit people from using Medicaid to pay for abortions, require safe and effective abortion medication to be dispensed in person, or drastically limit the window within which a person can legally obtain an abortion. "We always think about accessibility as the part of this that we do on the ground," Rodríguez says. Making sure everyone who needs it has clear and accurate information about the current legality of abortion is an access issue, and one that's important to consider at moments like this.

The message that abortion is still legal is especially important in the Latinx communities where Rodríguez and the Latina Institute do outreach, she says, as well as other marginalized communities where misinformation and intimidation around abortion is "rampant." Any time there's news around abortion restrictions, "folks have questions about whether or not abortion is still legal," Rodríguez explains. The confusion and misinformation instills fear and creates additional barriers, which play right into the hands of antiabortion groups looking to intimidate people away from procedures. "We want there to be education and clarity about what our rights are so that we can get the care we need," Rodríguez says.

Related:
Phoebe Bridgers Opens Up About Her Abortion: "Everyone Deserves That Kind of Access"

Regardless of the status of Roe v. Wade, the work done by local abortion funds, providers, and activists will continue. Overturning Roe v. Wade would be a significant blow, but Rodríguez is hopeful that this moment will also galvanize people to push for greater abortion access, outside of the legality question. "Mobilization and organizing at this moment is critical, and [it's] important to send a message to legislators who can take action," Rodríguez says. "We can take this back — it's just going to take time. But it starts now, with folks getting involved in the fight, and I think that's part of the messaging here."

Yes, the leaked opinion was just a draft, not a final ruling. And yes, abortion is still legal right now — a message that's worth spreading in order to steer the conversation away from misinformation while reminding people of their rights. And it's also essential to remember that while there may be little we can do to shift the tides regarding this particular ruling, the fight for abortion rights is more urgent than ever, especially at the state and local levels. "The fight has been going on . . . and it will persist beyond this decision," Rodríguez says. "And I think that's part of the message we want the community to hear . . . to really let this be the moment to sign up to fight."

Doja Cat
Doja Cat Cancels Upcoming Summer Tour Dates Because of Tonsil Surgery, Vows to "Quit the Vape For a While"
by Taylor Andrews 5 days ago